The Woods Hole Oceanographic Institution (WHOI) will lead the first international, multidisciplinary assessment of the levels and dispersion of radioactive substances in the Pacific Ocean off the Fukushima nuclear power plant—a research effort funded by the Gordon and Betty Moore Foundation.

“This project will address fundamental questions about the impact of this release of radiation to the ocean, and in the process enhance international collaboration and sharing of scientific data,” said Vicki Chandler, Chief Program Officer, Science at the Gordon and Betty Moore Foundation. “It is our hope that through this adverse event, we can increase our current knowledge about various natural and man-made sources of radioactivity in the ocean, and how they might ultimately impact ocean life and health around the world.”

The shipboard research team, which includes scientists from labs in the U.S., Japan, and Spain, will collect water and biological samples and take ocean current measurements in an area 200 km x 200 km offshore of the plant and further offshore along the Kuroshio Current. Their work will build on efforts by Japanese scientists and lay the foundation for expanded international collaboration and long-term research of questions related releases from the Fukushima plant. 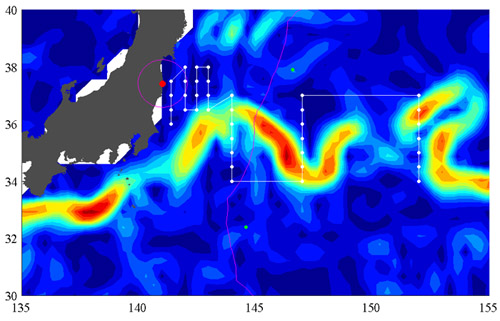 The map above depicts the trackline the ship will follow, with white dots representing the sampling stations. The plan covers an area 200x200 km off Fukushima as well as expected pathways along the Kuroshio Current (shown in yellows and reds). Image credit: Woods Hole Oceanographic Institution

The 15-day expedition aboard the University of Hawaii’s research vessel Kaimikai-O-Kanoloa departs June 4.

The release of radioactivity from the partial meltdowns, hydrogen explosions and fires that began March 11 at the Fukushima plant, and the runoff from the subsequent attempts to cool the reactors represents an unprecedented release of radiation to the ocean. The total amount of radioactivity that has entered the ocean as a result of this accident is not well understood, and until now, only limited assessment of the impacts on the ocean has been undertaken.

“It’s critical to gather early observations of the radioactive contaminants, or radionuclides, in the water and marine biota so we can establish a baseline,” said chief scientist Ken Buesseler, a WHOI senior scientist and a recognized expert in the study of radioisotope geochemistry. “Together with measurements of ocean currents, we can begin to understand the potential near- and long-term severity of the releases and related public health issues.”

The Japanese government and Fukushima plant owner, Tokyo Electric Power Company (TEPCO), began measuring radiation in the ocean—iodine and cesium isotopes—10 days after the accident and have been monitoring the water around the reactors up to 30 km from shore, where radiation levels have been highest. As the radiation moves offshore, it is diluted and mixed through the ocean depths along the way, so that levels of some contaminants just 15 miles offshore are 100 to 1,000 times lower than waters near the reactors. To put it in context, even these elevated levels are not far removed from the US Environmental Protection Agency drinking‐water standard for cesium-137 or from natural radionuclide concentrations found in the ocean. 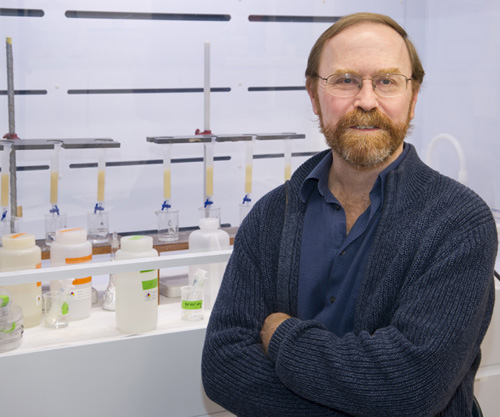 Although the elevated levels offshore pose little direct hazard for human exposure, questions remain about the impact of long-lived isotopes that can accumulate in the food chain and remain present in sediment, emitting a persistent low-dose in the marine environment for years to come.

Operating with the permission of the Japanese government, the ship will follow a track line from east to west and operate at 34 sampling stations, criss-crossing the Kuroshio Current, a strong, western boundary current akin to the Gulf Stream in the Atlantic, that could rapidly carry the radioactivity into the interior of the ocean. Deploying water sampling rosettes, the team will collect and analyze the samples for many radionuclides – among them isotopes of cesium, iodine, ruthenium promethium, strontium, plutonium, radium, and uranium – to learn how much contamination was released into the ocean, its potential impact on marine life and human health, and provide input to models for better understanding of contamination pathways and dispersion.

Steve Jayne, a physical oceanographer from WHOI and an expert in the Kuroshio Current and ocean circulation in the vicinity of the Japan archipelago, will lead the effort to understand the fate and pathways of radiation in the ocean.  His team will deploy drifters to directly track water parcels in the region of the Fukushima power plants, collect profiles of temperature, salinity and oxygen through the water column, and will use shipboard Acoustic Doppler Current Profiler (ADCP) to measure ocean velocity. These efforts will allow Jayne and his colleagues to characterize transport and water masses required for modeling dispersion and removal of radionuclide contaminants.

“It is important that we have in situ data on the trajectories of the water parcels. There has been a lot of numerical modeling of the where the contaminated water is going, but very little real data to validate the models.  Satellite data is useful, but the surface drifters and other ocean data will provide ground truth to check the model predictions,” Jayne said.

In addition to bringing warm tropical waters north, the Kuroshio Current transports organisms long distances and is an important migration route for a variety of commercially important marine organisms in various stages of their life cycles.  Biological samples and measurements, among the first to be collected offshore, will be gathered using a variety of filters and nets in an effort led by Nick Fisher of the State University of New York at Stony Brook. Fisher’s team will focus on phytoplankton and zooplankton at the base of the food chain and juveniles and adults of key fish species to determine the extent to which radionuclides are accumulated in these organisms.

“Currently, we do not know the extent to which some of these radionuclides have been bioaccumulated and passed up local food chains,” said Fisher.  “This is obviously of interest, since the principal concern about the dispersal of radionuclides in the ocean stems from the fact that they can potentially be toxic to marine organisms or even humans who consume seafood, and the potential for toxicity is dependent on the extent to which the radionuclides are bioconcentrated in marine organisms.”

All of the collected samples will be analyzed using the most sensitive techniques and tools in the world, which will provide a more detailed picture of where radioactivity is and where it traveled, and to detect radiation above background levels, including radionuclides in marine organisms.

Sample analysis will be performed over several months, and the end product will be a set of concentration maps for many different radionuclides obtained independently by several groups allowing for inter-comparison of analytical methods.

In addition to the Gordon and Betty Moore Foundation-funded work, Buesseler is also conducting research funded by the National Science Foundation to analyze water samples from a network of stations where the ability to retrieve ocean water samples already exists.

“While early data will tell us about possible health impacts to humans and marine biota, follow-up work will be needed for years and decades to come before we are able to say with any certainty that we understand the fate of these radionuclides in the ocean and the effect they have had on the marine environment,” said Buesseler. “These early field data will immediately increase our understanding of how radioactive pollutants travel through ocean currents in this region and will enable more effective response to events that might occur in the future.”

“This research expedition would not have been undertaken without Moore funding,” said WHOI President and Director Susan Avery. “Private support can be key to enabling an immediate, urgent response due to the independence and nimble nature of this source of funding. The Foundation made a decision to step in when no one else could.”

The Gordon and Betty Moore Foundation, established in 2000, seeks to advance environmental conservation and scientific research around the world and improve the quality of life in the San Francisco Bay Area. The Foundation’s Science Program aims to make a significant impact on the development of provocative, transformative scientific research, and increase knowledge in emerging fields. For more information, please visit www.moore.org.