Yale University scientists have developed a new mechanism for attacking cancerous tumors that intensifies the body’s immune response while simultaneously weakening the tumor’s ability to resist it.

“We believe this is a paradigm-changing immunotherapeutic method for cancer therapy,” said Tarek M. Fahmy, a bioengineer at Yale and the project’s principal investigator. “In essence, it’s a one-two punch strategy that seems to work well for melanoma and may work even better with other cancers.” 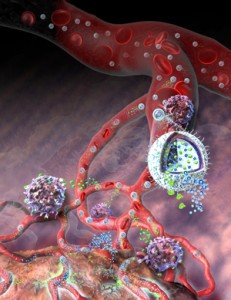 This illustration depicts a nanolipogel administering its immunotherapy cargo. The light-blue spheres within the blood vessels and the cutaway sphere in the foreground are the nanolipogels. (Illustration by Nicolle Rager Fuller, NSF)

The researchers report results July 15 online in the journal Nature Materials. Dr. Richard A. Flavell of Yale School of Medicine and the Howard Hughes Medical Institute collaborated on the project. Flavell is also a member of Yale Cancer Center.

Tumors — in this case metastatic melanomas, or spreading skin cancers — are adept at overcoming their host’s natural defenses, in part by emitting agents that disrupt production and operation of the immune system.

The Yale team developed a new biodegradable nanoparticle that delivers a combination of two very different therapeutic agents to tumor sites, gradually releasing the agents into the tumor vasculature. One agent, a large soluble protein called a cytokine, stimulates the body’s innate immune response. The other, a small-molecule inhibitor, interferes with the tumor’s ability to suppress the immune response. Other drug combinations are possible.

In tests on live mice, the double-loaded particle, called a nanogel, significantly delayed tumor growth and increased survival, the researchers report. They administered the nanogels intravenously and, in separate experiments, directly into the tumors. Further animal tests are planned.

The main challenge researchers faced was devising a particle that enabled gradual, sustained release of two therapeutic agents with very different properties: the protein, which readily dissolves in the body, and the small-molecule drug, which doesn’t. Researchers describe the materials and unique structure of their solution in the Nature Materials paper.

They exclusively used components already approved by the U.S. Food and Drug Administration. This could potentially expedite future experiments with other ingredients and human trials, they said.

Support for the project was provided by the National Institutes of Health; the National Science Foundation; Yale University; the Howard Hughes Medical Institute; and the PEW Charitable Trust.