Astronomers across the globe can now sift through hundreds of millions of galaxies, stars and asteroids collected in the first bundle of data from NASA’s Wide-field Infrared Survey Explorer (WISE) mission.

“Starting today thousands of new eyes will be looking at WISE data, and I expect many surprises,” said Edward (Ned) Wright of UCLA, the mission’s principal investigator.

WISE launched into space on Dec. 14, 2009 on a mission to map the entire sky in infrared light with greatly improved sensitivity and resolution over its predecessors. From its polar orbit, it scanned the skies about one-and-a-half times while collecting images taken at four infrared wavelengths of light. It took more than 2.7 million images over the course of its mission, capturing objects ranging from faraway galaxies to asteroids relatively close to Earth.

Like other infrared telescopes, WISE required coolant to chill its heat-sensitive detectors. When this frozen hydrogen coolant ran out, as expected, in early October, 2010, two of its four infrared channels were still operational. The survey was then extended for four more months, with the goal of finishing its sweep for asteroids and comets in the main asteroid belt of our solar system. 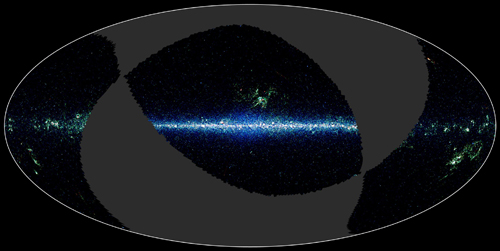 WISE has released 57 percent of its first sky survey to the astronomy community, as depicted here in this two-dimensional projection of the whole sky. The fuzzy line down the middle is our Milky Way galaxy, and bright clouds are star-forming complexes. Image credit: NASA/JPL-Caltech/UCLA

The mission’s nearby discoveries included 20 comets, more than 33,000 asteroids between Mars and Jupiter, and 133 near-Earth objects (NEOs), which are those asteroids and comets with orbits that come within 28 million miles (about 45 million kilometers) of Earth’s path around the sun. The satellite went into hibernation in early February of this year.

Today, WISE is taking the first major step in meeting its primary goal of delivering the mission’s trove of objects to astronomers. Data from the first 57 percent of the sky surveyed is accessible through an online public archive. The complete survey, with improved data processing, will be made available in the spring of 2012. A predecessor to WISE, the Infrared Astronomical Satellite, served a similar role about 25 years ago, and those data are still valuable to astronomers today. Likewise, the WISE legacy is expected to endure for decades.

“We are excited that the preliminary data contain millions of newfound objects,” said Fengchuan Liu, the project manager for WISE at NASA’s Jet Propulsion Laboratory, Pasadena, Calif. “But the mission is not yet over — the real treasure is the final catalog available a year from now, which will have twice as many sources, covering the entire sky and reaching even deeper into the universe than today’s release.”

Astronomers will use WISE’s infrared data to hunt for hidden oddities, and to study trends in large populations of known objects. Survey missions often result in the unexpected discoveries too, because they are looking everywhere in the sky rather than at known targets. Data from the mission are also critical for finding the best candidates for follow-up studies with other telescopes, including the European Space Agency’s Herschel observatory, which has important NASA contributions. 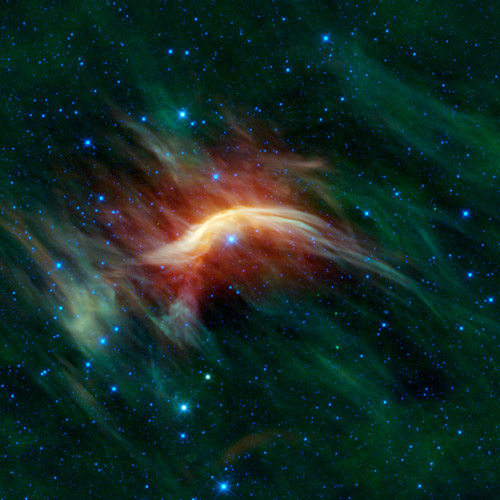 The blue star near the center of this image is Zeta Ophiuchi. When seen in visible light it appears as a relatively dim red star surrounded by other dim stars and no dust. However, in this infrared image taken with NASA's Wide-field Infrared Survey Explorer, or WISE, a completely different view emerges. Zeta Ophiuchi is actually a very massive, hot, bright blue star plowing its way through a large cloud of interstellar dust and gas. Image Credit: NASA/JPL-Caltech/UCLA

“WISE is providing the newest-generation ‘address book’ of the infrared universe with the precise location and brightness of hundreds of millions of celestial objects,” said Roc Cutri, lead scientist for WISE data processing at the Infrared Processing and Analysis Center at the California Institute of Technology in Pasadena, Calif. “WISE continues the long tradition of infrared sky surveys supported by Caltech, stretching back to the 1969 Two Micron Sky Survey.”

So far, the WISE mission has released dozens of colorful images of the cosmos, in which infrared light has been assigned colors we see with our eyes. The whole collection can be seen at https://wise.ssl.berkeley.edu/gallery_images.html .

The public archive for astronomers is online at https://wise2.ipac.caltech.edu/docs/release/prelim/index.html. Instructions for astronomy enthusiasts wanting to try their hand at using the archive are at https://wise.ssl.berkeley.edu/wise_image_service.html.