Crime And The Rise of Modern America

Nowhere celebrates its criminals like America. In books and on film, in fact and in fiction criminals sell.

The way people break the law has shaped American national identity just as clearly as any war according to research by University of Exeter historian, Dr Kristofer Allerfeldt.

His new book ‘Crime and the Rise of Modern America’ examines how crime and America are intertwined, defining each other. The research suggests that crime performs a role central to our understanding of America’s economic growth and its emergence as a super power.

The book covers the period from the end of the Civil War to the eve of America’s entry into World War Two. These years not only see the massive expansion of the economy, but also similar growth in the Federal Government; the population; the territory and the military. It also sees a huge expansion in crime, a legacy which has shaped America ever since. 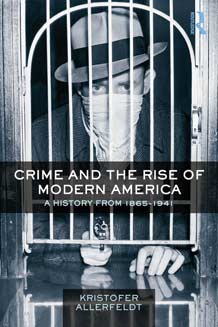 Starting with the period of reconstruction after the Civil War and on into the industrial revolution of the Gilded Age of the super rich industrialists and financers that was dominated by men like Rockefeller and Carnegie. Dr Allerfeldt said “These are men whose boundless greed and cavalier disregard for the spirit of the law fed into the attitude of the nation as a whole, and whose legacy can still be seen in the actions of Halliburton or Enron.”

This form of excess led to a demand for reform, and under the Puritanical Progressives, America criminalised prostitution, gambling and alcohol. This is best remembered as a failed experiment which led to syndicated criminals, running rum and the authorities staging shoot outs with the likes of Al Capone. Dr Allerfeldt suggests that we should rather look at the legacy of the prohibition of narcotics in these years and its continued impact in America, and across the world.

Crime was also central to America’s perception of itself, producing some of the most memorable images of the country’s culture. In the Great Depression. legendary figures like Bonnie and Clyde, John Dillinger and Pretty Boy Floyd provoked J Edgar Hoover’s War on Crime. These characters not only fuelled the seemingly unstoppable rise of the FBI, but they also sparked Hollywood’s most lasting romance.  Hoover’s manipulation of tinsel town has led directly to the blockbusters Public Enemies and American Gangster. Dr Allerfedlt explained, “The gangster/crime lord has become one of the most recognisable of American fictional historical figures, vying with the western outlaw, the hard-boiled detective or the bigoted southern sheriff for the position of the most heroic figure, or in some cases, anti-hero, in the US. Crime thrillers, westerns, detective stories, whodunits, heist films and gangster movies all make up the lucrative parts of the staple fare for Hollywood and the media.”

He added “This perpetuates the innumerable myths and half truths of criminal figures in American history. The mass circulation of newspapers grew during the period of media moguls such as Hearst and Pulitzer whose mass-circulation papers sensationalised crime stories. Crime sold papers, and terrified some, but it also sold the notion of America as a place of opportunity, criminal or otherwise, to others.”

Allerfeldt’s book represents the first time that American criminal history has been explored in its entirety over such an extensive period. This broad sweep enables a long term view and seeks to provide more informed insights rather than perpetuate myths about the criminal events and characters which played such a huge role in shaping the most powerful nation in the world.

Dr Allerfeldt commented, “We might be heading towards a hundred years since Capone’s era, but we live in an age when inner cities are still plagued by gangsters, making money from selling prohibited but widely desired products. Capone’s picture would probably be more recognisable to most Americans today than any of the Presidents in office while he rampaged through Chicago. The same is probably true of many American criminals, as gangster’s lifestyle continues to exert a peculiar draw on us.”