We might be one step closer to an Internet-of-things reality.

University of Washington engineers have created a new wireless communication system that allows devices to interact with each other without relying on batteries or wires for power.

The new communication technique, which the researchers call “ambient backscatter,” takes advantage of the TV and cellular transmissions that already surround us around the clock. Two devices communicate with each other by reflecting the existing signals to exchange information. The researchers built small, battery-free devices with antennas that can detect, harness and reflect a TV signal, which then is picked up by other similar devices.

The technology could enable a network of devices and sensors to communicate with no power source or human attention needed.

“We can repurpose wireless signals that are already around us into both a source of power and a communication medium,” said lead researcher Shyam Gollakota, a UW assistant professor of computer science and engineering. “It’s hopefully going to have applications in a number of areas including wearable computing, smart homes and self-sustaining sensor networks.” 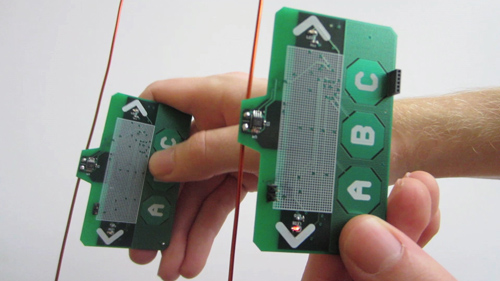 Using ambient backscatter, these devices can interact with users and communicate with each other without using batteries. They exchange information by reflecting or absorbing pre-existing radio signals. Image credit: University of Washington

The researchers published their results at the Association for Computing Machinery’s Special Interest Group on Data Communication 2013 conference in Hong Kong, which began Aug. 13. They have received the conference’s best-paper award for their research.

“Our devices form a network out of thin air,” said co-author Joshua Smith, a UW associate professor of computer science and engineering and of electrical engineering. “You can reflect these signals slightly to create a Morse code of communication between battery-free devices.”

Smart sensors could be built and placed permanently inside nearly any structure, then set to communicate with each other. For example, sensors placed in a bridge could monitor the health of the concrete and steel, then send an alert if one of the sensors picks up a hairline crack. The technology can also be used for communication – text messages and emails, for example – in wearable devices, without requiring battery consumption. 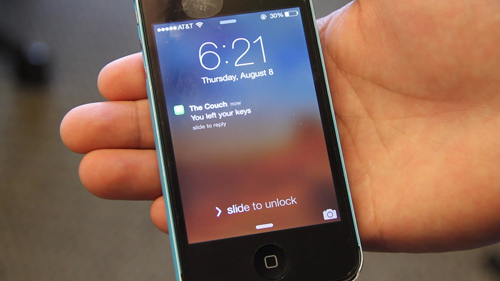 Everyday objects could be enabled with battery-free tags to communicate with each other. A couch could use ambient backscatter to let the user know where his keys were left. Image credit: University of Washington

The researchers tested the ambient backscatter technique with credit card-sized prototype devices placed within several feet of each other. For each device the researchers built antennas into ordinary circuit boards that flash an LED light when receiving a communication signal from another device.

Groups of the devices were tested in a variety of settings in the Seattle area, including inside an apartment building, on a street corner and on the top level of a parking garage. These locations ranged from less than half a mile away from a TV tower to about 6.5 miles away.

They found that the devices were able to communicate with each other, even the ones farthest from a TV tower. The receiving devices picked up a signal from their transmitting counterparts at a rate of 1 kilobit per second when up to 2.5 feet apart outdoors and 1.5 feet apart indoors. This is enough to send information such as a sensor reading, text messages and contact information.

It’s also feasible to build this technology into devices that do rely on batteries, such as smartphones. It could be configured so that when the battery dies, the phone could still send text messages by leveraging power from an ambient TV signal. 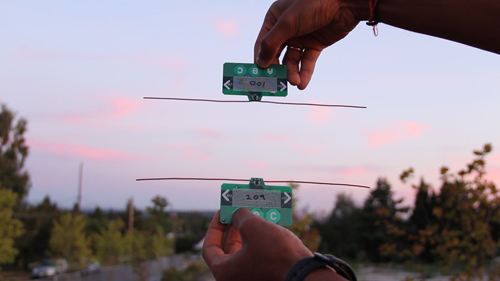 Researchers demonstrate how one payment card can transfer funds to another card by leveraging the existing wireless signals around them. Ambient RF signals are both the power source and the communication medium. Image credit: University of Washington

The applications are endless, the researchers say, and they plan to continue advancing the capacity and range of the ambient backscatter communication network.

The research was funded by the University of Washington through a Google Faculty Research Award and by the National Science Foundation’s Research Center for Sensorimotor Neural Engineering at the UW.