Dating violence in adolescence not only takes a physical and emotional toll on young women, it also leads to less education and lower earnings later in life, according to a first-of-its-kind study led by a Michigan State University researcher.

A young woman’s educational performance may be hindered by her partner’s actions, such as destroying books or homework or causing injuries that prevent her from going to school.

The findings, reported in the Journal of Interpersonal Violence, reinforce the need for programs and efforts to support victims’ education and career development throughout their lives, said Adrienne Adams, lead researcher on the study and MSU assistant professor of psychology.

“It was woman after woman coming into the shelter trying to find a job and a house she could afford – trying to reestablish life on her own,” Adams said. “Many women would end up going back to their abusive relationship because they couldn’t make it on their own financially.” 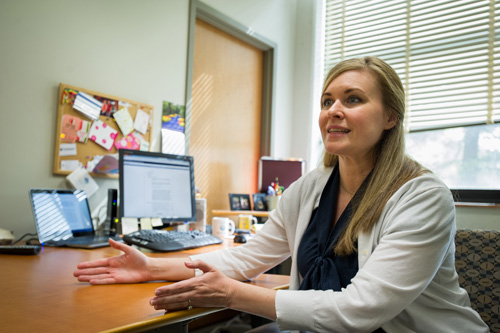 Adams and her fellow researchers analyzed survey data of about 500 single mothers who were, on average, 32 years old and earned less than $7,000 per year. Participants who had been victimized by dating partners as adolescents obtained significantly less education.

Each additional year of education was associated with an extra $855 in earnings, which is a lot of money when you make less than $7,000, Adams noted.

“There’s vast evidence showing how important education is for people’s quality of life,” Adams said. “Providing educational and career-development support for women who are abused seems like an obvious choice in terms of societal investment.”

The study, the first to investigate the economic effects of dating violence, was co-authored by Megan Greeson from DePaul University, Angie Kennedy from MSU and Richard Tolman from the University of Michigan.

The research was funded by the National Institute of Mental Health, the Charles Stewart Mott Foundation, the Joyce Foundation and the John D. and Catherine T. MacArthur Foundation.