Automated trail cameras set up by a UA research team have snapped pictures of a male jaguar and a male ocelot roaming the rugged Southern Arizona landscape.

An adult male jaguar and an adult male ocelot have been photographed in two separate Southern Arizona mountain ranges by automated wildlife monitoring cameras. The images were collected as part of the Jaguar Survey and Monitoring Project led by the University of Arizona. Both animals appear to be in good health.

In late November, the UA project team downloaded photos from wildlife cameras set up as part of the research project and found new pictures of a jaguar in the Santa Rita Mountains. A total of 10 jaguar photos were taken by three UA cameras and one Arizona Game and Fish Department camera. The cat’s unique spot pattern matched that of a male jaguar photographed by a hunter in the Whetstone Mountains in the fall of 2011, providing clear evidence that the big cats travel between Southern Arizona’s “sky island” mountain ranges.

“We are very pleased about these photos,” said Lisa Haynes, who manages the research project and coordinates the Wild Cat Conservation and Research Center project. “I am proud of our field team and their incredible knowledge and capacity to place these cameras in the best locations to detect jaguar and ocelot movement.” 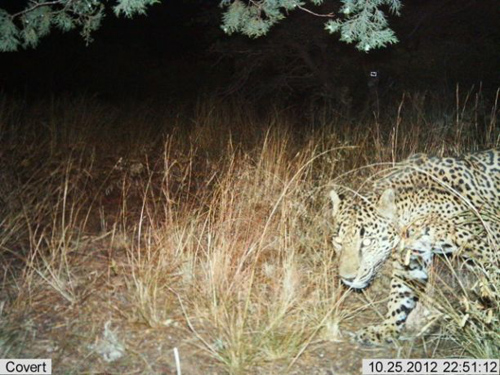 Automatic wildlife cameras snapped this photo of a male jaguar on a nightly walk in the Santa Rita Mountains on Oct 25. (Photo by: USFWS/UA/DHS)

In September, a photo showing a jaguar tail was reported by the Arizona Game and Fish Department from a hunter’s automated wildlife monitoring camera in the Santa Rita Mountains.

“None of the UA photos can be matched to this ‘tail photo’ because, in the new photos, the tail is obscured or the opposite side of the jaguar was photographed,” Haynes explained. “However, we believe the jaguar is most likely the same individual.”

In addition, a new ocelot photo was taken in the Huachuca Mountains west of Sierra Vista by one of the UA project cameras. Again, comparisons of the spot patterns revealed this to be the same male ocelot that has been reported by the Arizona Game and Fish Department and photographed in the Huachucas several times in 2011 and 2012. However, the UA photo was taken about 4 miles away from the previous photos, demonstrating that even the smaller cats move across the rugged Arizona landscape.

The purpose of the UA research project is to establish a non-invasive, hands-off system for detecting and monitoring jaguars and ocelots. The project is using motion-sensor-activated “trail” cameras placed in areas where the spotted cats are most likely to be detected. Once fully operational, up to 240 paired cameras will be in place throughout the project area to capture images of both sides of detected animals. 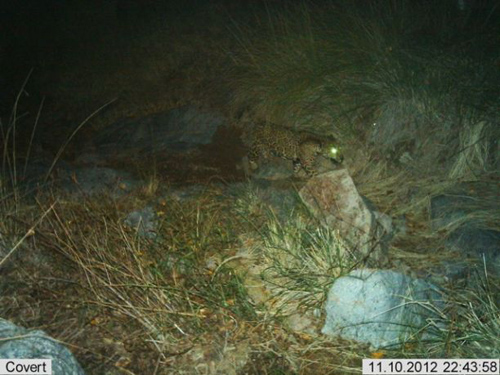 When a trail camera detects the movement of a passing animal, it snaps a picture. Images are stored and later retrieved by wildlife biologists. (Photo by: USFWS/UA/DHS)

Very little is known about these cats in the northern part of their range. The primary distribution of jaguars and ocelots, both known as Neotropical cats, ranges across Central and South America and Mexico. Both species occurred historically and recently in the southwestern United States, although in few numbers. Every new data point will add to the science and body of knowledge about their distribution and ecology in the southwestern U.S., which is why this project is so important.

The UA is conducting this large-scale project to detect and monitor jaguars and ocelots along the northern boundary of the U.S.-Mexico international border, from the Baboquivari Mountains in Arizona to the southwestern “boot heel” of New Mexico.

The researchers also are employing a specially-trained scat detection dog to assist the team in collecting potential jaguar and ocelot scat in the areas where a jaguar or ocelot has been detected by camera. The UA Conservation Genetics lab, under the leadership of Melanie Culver, U.S. Geological Survey geneticist in the UA School of Natural Resources and the Environment, will conduct genetic testing of the scat to verify species and possibly identify the individual cats. 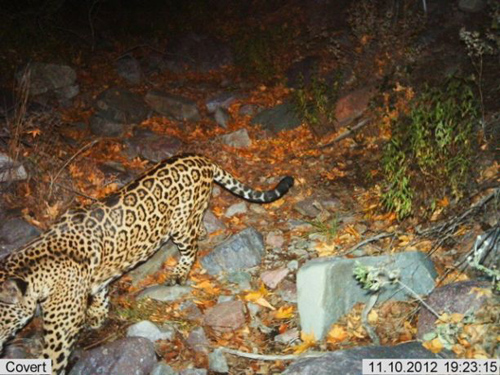 Researchers can identify individual jaguars by their unique rosette pattern. (Photo by: USFWS/UA/DHS)

Culver, who is the project’s principal investigator, said: “What is exciting about this research project is the combination of techniques and skills, from the deep knowledge of our field people of how wild cats move around the landscape to cutting edge molecular-genetic analysis of the scats. We are particularly enthused about the potential information we may retrieve from the project’s trained scat detection dog that will certainly advance our understanding of these two wild cat species.”

In addition to obtaining the photos of jaguars and ocelots, the team will be assembling the most comprehensive photo data set of other wildlife in this region that has ever been done. With a photo processing system and computer program developed by one of the members, the researchers will gain an unprecedented understanding of the distribution, diversity and activity patterns of other species of wildlife, providing insight into jaguar and ocelot ecology and habits.

“We are looking forward to closely analyzing these new photos with respect to other wildlife in the area,” Haynes said. 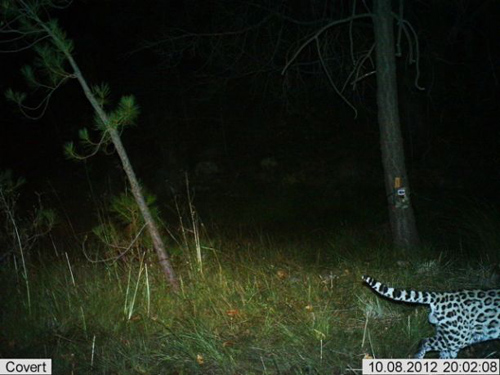 This male ocelot was photographed by automatic wildlife cameras in the Huachuca Mountains on Oct 8. (Photo by: USFWS/UA/DHS)

The three-year study will be accomplished under a contract with funds provided by the U.S. Department of Homeland Security to the U.S. Fish and Wildlife Service. The purpose of these funds is to address and mitigate environmental impacts of border-related enforcement activities.