‘Wicked Weed of The West’ Waning With Effect of Weevils, Other Nontoxic Remedies, Cu Finds

It’s not often that plants are described as diabolical, but spotted knapweed has that rare distinction. A 2004 issue of Smithsonian magazine, for instance, dubbed it the “wicked weed of the West,” a “national menace” and a “weed of mass destruction.”

Such reports were overstated and incorrect, but the press wasn’t making this stuff up. It was summarizing research results published in leading academic journals.

For example, an influential paper in the journal Science reported that knapweed produced poisons that killed native species.

In the academic and agricultural world, the prevailing view was that invasive species like spotted knapweed were crowding out native species on farmland and the prairie, that they had to be eradicated or at least controlled, and that the best means of doing this was through the use of herbicides.

Tim Seastedt, a professor of ecology and evolutionary biology at the University of Colorado Boulder, has spent about 14 years studying the spread and control of knapweeds. His research contradicts the view that knapweed is a floral WMD. 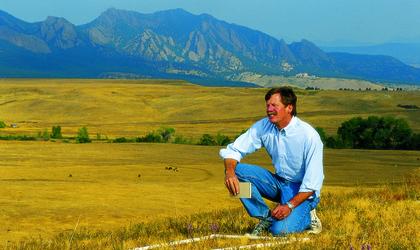 Further, his work indicates that weed-eating bugs such as certain flies and weevils—knapweed’s natural predators—can keep and are keeping the weed under control.

In 2010, Seastedt and CU researcher David Knochel reported that by using only the biological controls—meaning weed-eating insects—one area of Spruce Gulch has shown an 80 percent decline in plant densities since 2007.

In several recent studies funded by the U.S. Department of Agriculture, Seastedt and Knochel have replicated these results.

Knapweed is native to Eurasia and was accidentally carried into the United States in the late 1800s, according to the USDA. It has spread over millions of acres of land in North America, out-competing native species.

Knapweed can crowd out alfalfa and other plants on which cows graze. The weeds’ spread seemed to accelerate in the 1990s.

In 1996, Boulder County began using helicopters to spray herbicides on diffuse knapweed, a close relative of spotted knapweed. In 1997, Seastedt told the county commissioners that spraying made little sense.

Spraying herbicides on 1,000-acre parcels in a sea of tens of thousands of acres of knapweed would not have any long-term benefit, he said.

The county let Seastedt conduct experiments on public land, trying to control knapweed with some of the plant’s natural predators, which had not arrived with the weed itself.

“We started with about 50 insects against about a million plants in 1997,” Seastedt recalls. The bugs took awhile to make an impact. On one parcel of land, the number of knapweed stems per square meter more than doubled between 1997 and 2000.

By 2001, however, the knapweed density had dropped about 80 percent. It fell even more the following two years. Density rose slightly in 2004 and ’05, then fell again to near-zero levels.

The introduction of knapweed’s natural predators was part of the reason for the decline. Another was that as knapweed populations struggled, other species bounced back. “We demonstrated that plant competition mattered,” Seastedt notes. “The invaders didn’t really do well if competing plant species were present.”

Still, “The surprise was how well the biocontrols worked and how quickly they worked,” he said. The results have been replicated from Colorado to British Columbia.

Knapweed seems to have been controlled in its native lands by traditional predators, and it appears to be manageable here too. With the addition of natural predators and competing plants, “It still exists, but it’s not an ecological threat,” Seastedt said.

Read more on this story soon in Colorado Arts & Sciences Magazine at artsandsciences.colorado.edu/magazine.