Why Do Organisms Build Tissues They Seemingly Never Use?

EAST LANSING, Mich. — Why, after millions of years of evolution, do organisms build structures that seemingly serve no purpose?

A study conducted at Michigan State University and published in the current issue of The American Naturalist investigates the evolutionary reasons why organisms go through developmental stages that appear unnecessary.

“Many animals build tissues and structures they don’t appear to use, and then they disappear,” said Jeff Clune, lead author and former doctoral student at MSU’s BEACON Center of Evolution in Action. “It’s comparable to building a roller coaster, razing it and building a skyscraper on the same ground. Why not just skip ahead to building the skyscraper?” 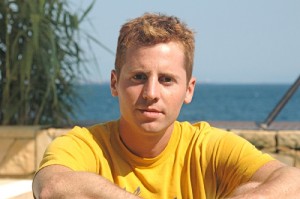 Jeff Clune, a postdoctoral fellow at Cornell University, conducted research at MSU that addresses the evolutionary aspects of why organisms go through developmental stages that seem unnecessary. Photo courtesy of MSU.

Why humans and other organisms retain seemingly unnecessary stages in their development has been debated between biologists since 1866. This study explains that organisms jump through these extra hoops to avoid disrupting a developmental process that works. Clune’s team called this concept the “developmental disruption force.” But Clune says it also could be described as “if the shoe fits, don’t change a thing.”

“In a developing embryo, each new structure is built in a delicate environment that consists of everything that has already developed,” said Clune, who is now a postdoctoral fellow at Cornell University. “Mutations that alter that environment, such as by eliminating a structure, can thus disrupt later stages of development. Even if a structure is not actually used, it may set the stage for other functional tissues to grow properly.”

“An engineer would simply skip the roller coaster step, but evolution is more of a tinkerer and less of an engineer,” Clune said. “It uses whatever parts that are lying around, even if the process that generates those parts is inefficient.”

An interesting consequence is that newly evolved traits tend to get added at the end of development, because there is less risk of disrupting anything important. That, in turn, means that there is a similarity between the order things evolve and the order they develop.

A new technology called computational evolution allowed the team to conduct experiments that would be impossible to reproduce in nature.

Rather than observe embryos grow, the team of computer scientists and biologists used BEACON’s Avida software to perform experiments with evolution inside a computer. The Avidians – self-replicating computer programs – mutate, compete for resources and evolve, mimicking natural selection in real-life organisms. Using this software, Clune’s team observed as Avidians evolved to perform logic tasks. They recorded the order that those tasks evolved in a variety of lineages, and then looked at the order those tasks developed in the final, evolved organism.

They were able to help settle an age-old debate that developmental order does resemble evolutionary order, at least in this computationally evolving system. Because in a computer thousands of generations can happen overnight, the team was able to repeat this experiment many times to document that this similarity repeatedly occurs.