The phenomenon in ferromagnetic nanodisks of magnetic vortices – hurricanes of magnetism only a few atoms across – has generated intense interest in the high-tech community because of the potential application of these vortices in non-volatile Random Access Memory (RAM) data storage systems. New findings from scientists at the U.S. Department of Energy (DOE)’s Lawrence Berkeley National Laboratory (Berkeley Lab) indicate that the road to magnetic vortex RAM might be more difficult to navigate than previously supposed, but there might be unexpected rewards as well.

In an experiment made possible by the unique X-ray beams at Berkeley Lab’s Advanced Light Source (ALS), a team of researchers led by Peter Fischer and Mi-Young Im of the Center for X-Ray Optics (CXRO), in collaboration with scientists in Japan, discovered that contrary to what was previously believed, the formation of magnetic vortices in ferromagnetic nanodisks is an asymmetric phenomenon. It is possible that this breaking of symmetry would lead to failure in a data storage device during its initialization process.

“Our experimental demonstration that the vortex state in a single magnetic nanodisk experiences symmetry breaking during formation means that for data storage purposes, there would probably need to be a lengthy verification process to correct for errors,” Im says. “On the plus side, non-symmetric behavior creates a biasing effect that could be applied to a sensor or a logic device.”

“Our study is also a nice example of mesoscale science, which brings the nanoscience of the last decade to the next level,” Fischer says. “Mesoscale phenomena encompass complexity and functionality over various length scales.” 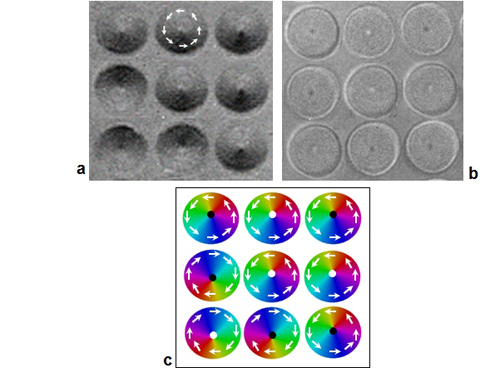 MTXM images of in-plane (a) and out-of-plane (b) magnetic components in an array of permalloy nanodisks. In-plane magnetic rotation is shown by white arrow (a). Core polarization is marked by black (up) and white (down) spots. Image (c) shows the complete vortex configuration of each nanodisk in the array. (Images courtesy of Im and Fischer)

Im and Fischer describe this study in a paper published in the journal Nature Communications. The paper is titled “Symmetry breaking in the formation of magnetic vortex states in a permalloy nanodisk.” Co-authoring this paper were Keisuke Yamada, Tomonori Sato, Shinya Kasai, Yoshinobu Nakatani and Teruo Ono.

Magnetic vortex states are generated in ferromagnetic nanodisks because the spin of electrons, which gives rise to magnetic moments, must follow the shape of the disk to ensure closure of magnetic flux lines. This results in the curling of the in-plane magnetization flux lines. At the center of these curling flux lines is a needlelike core, an “eye-of-the-hurricane” that points either up or down with respect to the surface plane of the nanodisk.

“The magnetization of the ferromagnetic nanodisk therefore has two components, the up or down polarity of the core and the chirality (rotation) of the in-plane magnetization, which can be either clockwise or counter-clockwise,” Im says. “It has been proposed that these four independent orientations can be used to store binary data in novel non-volatile storage devices.”

“The assumption has been that magnetic vortex states would exhibit a perfect symmetry required for vortex-based data-storage devices because the energy states of the four orientations were equivalent, meaning four logical values per unit,” Fischer says. “However, we show that if you analyze a sufficiently large ensemble of nanodisks, this is not the case. Our results demonstrate how mesoscale behavior can be significantly different from nanoscale behavior.”

The key to the discovery of magnetic vortex symmetry-breaking was the research team’s ability to simultaneously observe both chirality and polarity in a large array of nanodisks. Previous studies focused on either the chirality or polarity in a single disk. This simultaneous observation was accomplished using the XM-1 x-ray microscope at ALS beamline 6.1.2. XM-1 provides full-field magnetic transmission soft X-ray microscopy with spatial resolution down to 20 nanometers, thanks in part to the high quality X-ray optics provided by CXRO researchers. 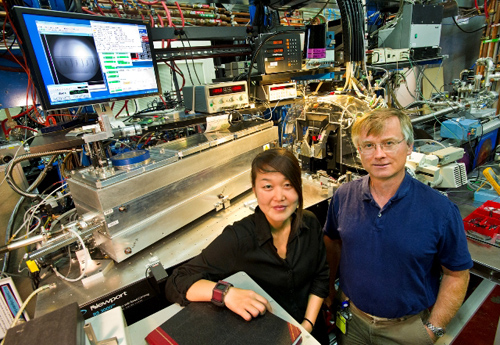 Mi-Young Im and Peter Fischer of Berkeley Lab’s Center for X-Ray Optics led a study at the Advanced Light Source in which it was discovered that the formation of magnetic vortices in ferromagnetic nanodisks is an asymmetric phenomenon. (Photo by Roy Kaltschmidt)

Im, Fischer and their colleagues fashioned nanodisks from permalloy, a nickel and iron alloy whose magnetic properties have been fully characterized. Using electron-beam lithography they patterned large arrays of disks, each with a radius of 500 nanometers and a thickness of 100 nanometers. The arrays were deposited on silicon-nitride membranes to allow for sufficient transmission of soft X-rays and exposed in XM-1 for a few seconds. In their paper, the authors conclude that the observed symmetry breaking most likely results from a combination of intrinsic and extrinsic factors. The intrinsic factor is believed to be an antisymmetric coupling between the spins of two electrons called the Dzyaloshinskii–Moriya interaction. Extrinsic factors include defects along the edges of the nanodisks and rough nanodisk surfaces.

“Our finding is certainly a new physical phenomenon in magnetic vortices, which has not been explored so far,” says Im. “The statistical significance of our experimental work and our rigorous 3D micromagnetic simulation for the generation process of vortex state provides important new information for the less known physics in the magnetization process of nanodisks.”

“We’ve also shown that deterministic behavior and functionality on the mesoscale cannot always be extrapolated from even a complete understanding of nanoscale behavior,” Fischer says. “In other words, understanding a single LEGO brick might not be enough to build a large and complex structure.” 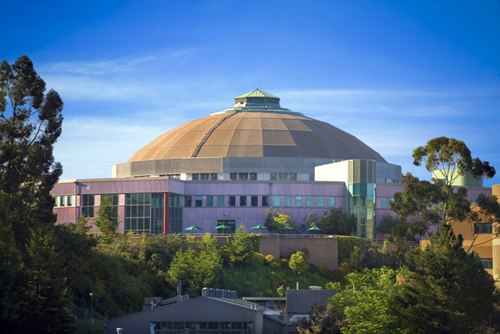 Berkeley Lab’s Advanced Light Source is a DOE national user facility that features amongst its 43 beamlines a full-field magnetic transmission soft X-ray microscope with spatial resolution down to 20 nanometers. (Photo by Roy Kaltschmidt)

Im is the corresponding author of the Nature Communications paper. Co-authors Yamada and Ono are with Kyoto University, co-authors Sato and Nakatani are with the University of Electro-Communications at Chofu, and co-author Kasai is with Japan’s National Institute for Materials Science in Tsukuba.