When Rachel Aronson travels this month to Alaska, she and a local research assistant will interview people who are in danger of being displaced by climate change. She will also send about 100 postcards to her funders.

The leading site is Kickstarter, which mostly hosts arts, technology and craft projects (see UW examples here, here and here.) Some scientists are posting on Kickstarter, but more are using more specialized sites. 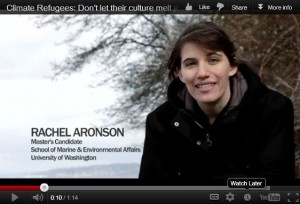 Rachel Aronson made a YouTube video for her campaign to interview Alaskans about climate change. Image credit: University of Washington

Aronson, a UW Master’s student in Marine and Environmental Affairs, ran her campaign to interview Alaskans about climate change as part of the March launch of Petridish.org, a New York-based startup aimed at scientific research. The organization approached Aronson’s adviser, Kiki Jenkins, an assistant professor in the School of Marine and Environmental Affairs, and Aronson decided to give it a try.

“It was a pretty time intensive process,” Aronson said. She contacted reporters, used social media and leveraged all her social connections until the final hour of the 60-day campaign.

In the end, though, she surpassed her goal of $3,400. Roughly half the contributors were people she had never met.

“If you don’t feel totally comfortable talking about it with everyone you know, then crowd funding probably isn’t for you,” Aronson advised. “I don’t think you can just put your project up on a website and expect it to get funded.”

Last May, three members of the UW’s College of the Environment took part in the first SciFund Challenge, a crowd-funding experiment by a group of scientists. Lauren Kuehne, a UW research scientist in Aquatic and Fishery Sciences, ran a successful campaign to record lake noise in Western Washington. Karen Boenker, a UW Master’s student in Environmental and Forest Sciences, ran a campaign to survey Hawaiian residents about alternative energy. And Emma Schiffman, a UW doctoral student in Aquatic and Fisheries Sciences, ran a successful campaign to study how ocean acidification affects Pacific oysters.

All of the SciFund campaigns were hosted on RocketHub, a platform that also caters to artists, musicians and entrepreneurs.

“It was amazing to be part of this group of people that were mostly trying something new for the first time,” Kuehne said. The UW trio coordinated their efforts to avoid bombarding colleagues with requests.

Kuehne said the experience was very positive. In addition to paying for data collection, the campaign connected her to potential research partners, funders and members of the public who are interested in this research area.

“Your project should be as much about communicating the research as it should be about raising the funds,” Kuehne said. When considering a possible project “there should be an outreach message, and [the campaign] should also be about getting people engaged and interested in your research.”

Kuehne suggests choosing a project that people can connect to, and that might benefit from a wider audience.

“This is a great way to communicate science, and I don’t think that I would take it on if it wasn’t at least 50 percent about communicating the research need or issue.”

The UW is in a unique position: One of the new science-focused platforms has an office in the UW’s Business Hall. Microryza is an early-stage startup launched in April by Cindy Wu, who earned her B.S. in biology in 2011, and Denny Luan, who earned his B.S. in biochemistry and economics in 2011. Luan said he was motivated by a frustration with the existing science funding process, and inspired by the success of microfinance through his participation with the UW chapter of the microcredit organization Kiva.

“We want to open up a research window into the lab,” Luan said. “Instead of donating to a research charity, where it’s very much a black box, here you see where your money goes.”

Though not exclusive to the UW, so far most of the Microryza campaigns have been from here.Biology professor Dee Boersma has a campaign in progress to tag penguins with GPS, her first experiment in crowd funding a research project. Christian Sidor, associate professor of biology, successfully used the site to bring a triceratops skeleton to the Burke Museum. Now a couple of chemical engineering undergraduates are using the site to try to fund a project on non-stick cookware.

“It’s a very enthusiastic team, and I think it’s a good experience for someone who’s new to crowd funding,” said Nicholas Wang, a new graduate in chemical engineering who is using the site to raise money to further test his nontoxic coating. Microryza’s co-founders coached Wang and research partner Kathryn Cogert on creating a short video and on using social media to spread the word.

Unlike some of the other sites, Microryza does not require that projects offer postcards or other donor rewards.

The various platforms differ in the percentage of donations they take, how long the campaign can run, and whether there’s a cap on the amount scientists can aim for (most are around a couple thousand dollars).

Participants recommend shopping around to find the best deal.

Businesses can offer the possibility of profit. Can crowd-funding work for academic research?

Online donations may never support a major research project, but money raised through crowd funding could be used to gather preliminary data to support applications for more grants, commented David Eaton, the UW’s associate vice provost for research. It could also fund areas of research that have relatively low costs.

Scientists who try crowd funding are publicly committed to seeing it through. With just a few weeks left and just a quarter of his goal raised, Wang plans to step up his campaign.

“It’s getting down to crunch time,” he said.