Why are There so Many Species of Beetles and So few Crocodiles?

There are more than 400,000 species of beetles and only two species of the tuatara, a reptile cousin of snakes and lizards that lives in New Zealand. Crocodiles and alligators, while nearly 250 million years old, have diversified into only 23 species. Why evolution has produced “winners” — including mammals and many species of birds and fish — and “losers” is a major question in evolutionary biology.

Scientists have often posited that because some animal and plant lineages are much older than others, they have had more time to produce new species (the dearth of crocodiles notwithstanding). This idea — that time is an important predictor of species number — underlies many theoretical models used by biologists. However, it fails to explain species numbers across all multi-cellular life on the planet, a team of life scientists reports Aug. 28 in the online journal PLoS Biology, a publication of the Public Library of Science.

“We found no evidence of that,” said Michael Alfaro, a UCLA associate professor of ecology and evolutionary biology and senior author of the new study. “When we look across the tree of life, the age of the group tells us almost nothing about how many species we would expect to find. In most groups, it tells us nothing.” 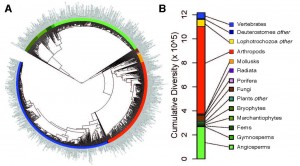 Another idea, that some groups are innately better or worse at producing species, similarly fails to explain differences in species number among all of the major living lineages of plants and animals, the life scientists found.

“We know that some groups, like flowering plants or cichlid fishes, have been exceptionally good at producing species during certain periods of their evolutionary history,” Alfaro said. “However, when we look at the ages of all of the major groups of plants and animals, these differences in speciation rate are not sufficient to explain the differences in species number that exist in extant groups.”

The relationships between age and species richness in major groups reveals that in almost every major group, age and diversity are not strongly correlated, life scientists report. Image credit: Amisha Gadani/UCLA ecology and evolutionary biology

Alfaro and his colleagues studied 1,397 major groups of multi-cellular eukaryotes — including animals, plants and fungi — that account for 1.2 million species. Working as “evolutionary detectives,” they were able to see whether the groups that split the earliest tended to have the most species. They assigned a “species richness score” to these 1,397 groups, using novel statistical and computational methods they developed.

If age does not explain species diversity, an alternative idea is that a lineage will produce species up until the point that it fills an “adaptive zone” that allows a maximum number of species, Alfaro said. In other words, a lineage of bats, whales or penguins has a maximum capacity that is determined by habitat requirements and competitors.

When an adaptive zone is first colonized, the growth of new species will be rapid, up until that limit has been reached. Once a zone is full, this speciation rate will level off. New species will not emerge until one of two events occurs: First, an existing species may go extinct, in which case it may be replaced. Second, a species within the adaptive zone may evolve a new trait —sharp teeth, wings, chemical defenses or camouflage, for example — that confers a significant ecological advantage and takes it into a new adaptive zone, creating opportunities for new species to emerge, Alfaro said.

Thus, these adaptive zones, which Alfaro also calls “ecological limits,” serve to restrict the number of new species that can emerge. 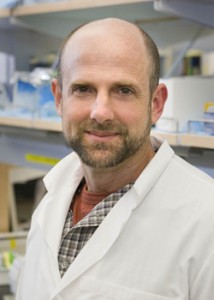 “Most of the groups that we studied have hit their limits,” he said. “Ecological limits can explain the data we see. What’s really driving things is how many times lineages evolve new innovations that move them into new adaptive zones.

“The ultimate goal in our field is to have a reconstruction of the entire evolutionary history of all species on the planet,” Alfaro added. “Here we provide a piece of the puzzle. Our study sheds light on the causal factors of biodiversity across the tree of life.”

The research is funded by the National Science Foundation and by the University of California’s Miller Institute for Basic Research in Science.

In a 2009 study published in Proceedings of the National Academy of Sciences, Alfaro and his colleagues reported that mammals and many species of birds and fish are among evolution’s “winners,” while crocodiles, alligators and a reptile cousin of snakes and lizards known as the tuatara are among the “losers.” That study also showed that new species emerge nearly as often as they die off.

For more about Alfaro’s research, visit his website at https://pandorasboxfish.squarespace.com.