More than a year after the largest oil spill in history, perhaps the dominant lingering question about the Deepwater Horizon spill is, “What happened to the oil?” Now, in the first published study to explain the role of microbes in breaking down the oil slick on the surface of the Gulf of Mexico, Woods Hole Oceanographic Institution (WHOI) researchers have come up with answers that represent both surprisingly good news and a head-scratching mystery.

In research scheduled to be published in the Aug. 2 online edition of Environmental Research Letters, the WHOI team studied samples from the surface oil slick and surrounding Gulf waters. They found that bacterial microbes inside the slick degraded the oil at a rate five times faster than microbes outside the slick—accounting in large part for the disappearance of the slick some three weeks after Deepwater Horizon’s Macondo well was shut off. 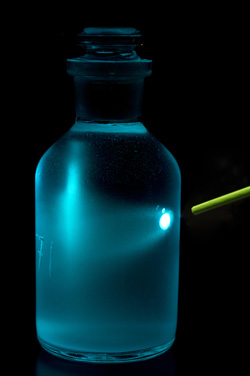 A new technique for determing the concentration of oxygen in a liquid sample uses a laser (coming from the green fiber, right) and an oxygen-sensitive sticker called an optode (pale spot) inside the sample bottle. When struck by the laser, the sticker fluoresces; the wavelength of the light it gives off indicates the concentration of oxygen in the fluid around it. WHOI chemist Ben Van Mooy used this method to monitor microbial activity in samples of water taken from within and outside the oil slick on the surface of the Gulf of Mexico after the Deepwater Horizon oil spill. (Photo by Tom Kleindinst, Woods Hole Oceanographic Institution)

At the same time, the researchers observed no increase in the number of microbes inside the slick—something that would be expected as a byproduct of increased consumption, or respiration, of the oil. In this process, respiration combines food (oil in this case) and oxygen to create carbon dioxide and energy.

“What did they do with the energy they gained from this increased respiration?” asked WHOI chemist Benjamin Van Mooy, senior author of the study. “They didn’t use it to multiply. It’s a real mystery,” he said.

Van Mooy and his team were nearly equally taken aback by the ability of the microbes to chow down on the oil in the first place. Going into the study, he said, “We thought microbe respiration was going to be minimal.” This was because nutrients such as nitrogen and phosphorus—usually essential to enable microbes to grow and make new cells—were scarce in the water and oil in the slick. “We thought the microbes would not be able to respond,” Van Mooy said.

But the WHOI researchers found, to the contrary, that the bacteria not only responded, but did so at a very high rate. They discovered this by using a special sensor called an oxygen optode to track the changing oxygen levels in water samples taken from the slick. If the microbes were respiring slowly, then oxygen levels would decrease slowly; if they respired quickly, the oxygen would decrease quickly.

Bethanie Edwards, a biochemist in Van Mooy’s lab and lead author of the paper, said she too was “very surprised” by the amount of oil consumption by the microbes. “It’s not what we expected to see.” She added that she was also “a little afraid” that oil companies and others might use the results to try to convince the public that spills can do relatively little harm. “They could say, ‘Look, we can put oil into the environment and the microbes will eat it,’” she said. 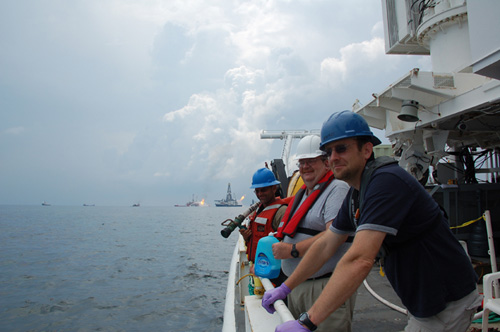 From the deck of the research vessel Endeavor, Ben Van Mooy (right) and others survey the scene near the burning Deepwater Horizon oil rig in the Gulf of Mexico in June, 2010. Van Mooy was a member of a team of WHOI scientists who went to the Gulf to study aspects of the oil spill, including how fast it was flowing out of the ruptured wellhead and whether it was flowing in a deep plume of hydrocarbons. Van Mooy's experiments focused on whether microbes were eating oil in the surface slick and in the deep plume, and whether their activities were lowering oxygen levels enough to endanger fish and other marine life. (Photo by Dan Torres, Woods Hole Oceanographic Institution)

Edwards, a graduate student in the joint MIT/WHOI program, pointed out that this is not completely the case, because oil is composed of a complex mixture molecules, some of which the microbes are unable to break down.

“Oil is still detrimental to the environment, “ she said, “because the molecules that are not accessible to microbes persist and could have toxic effects.” These are the kinds of molecules that can get into the food web of both offshore and shoreline environments, Edwards and Van Mooy said. In addition, Edwards added, the oil that is consumed by microbes “is being converted to carbon dioxide that still gets into the atmosphere.”

Follow-up studies already “are in place,” Van Mooy says, to address the “mysterious” finding that the oil-gorging microbes do not appear to manufacture new cells. If the microbes were eating the oil at such a high rate, what did they do with the energy? Van Mooy, Edwards, and their colleagues hypothesize that they may convert the energy to some other molecule, like sugars or fats. They plan to use “state-of-the-art methods” under development in their laboratory to look for bacterial fat molecules, a focus of Van Mooy’s previous work. The results, he says, “could show where the energy went.”

Van Mooy said he isn’t sure exactly what fraction of the oil loss in the spill is due to microbial consumption; other processes, including evaporation, dilution, and dispersion, might have contributed to the loss of the oil slick. But the five-fold increase in the microbe respiration rate suggests it contributed significantly to the oil breakdown. “Extrapolating our observations to the entire area of the oil slick supports the assertion microbes had the potential to degrade a large fraction of the oil as it arrived at the surface from the well,” the researchers say in their paper.

“This is the first published study to put numbers on the role of microbes in the degradation of the oil slick,” said Van Mooy. “Our study shows that the dynamic microbial community of the Gulf of Mexico supported remarkable rates of oil respiration, despite a dearth of dissolved nutrients,” the researchers said.

Edwards added that the results suggest “that microbes had the metabolic potential to break down a large portion of hydrocarbons and keep up with the flow rate from the wellhead.”

Also participating in the study from WHOI were researchers Christopher M. Reddy, Richard Camilli, Catherine A. Carmichael, and Krista Longnecker.

The research was supported by RAPID grants from the National Science Foundation.