What happens when the water rises?

Societal concerns about climate change, severe weather and rising seas are raising questions about readiness across the globe. Extreme weather events this year such as Hurricanes Harvey, Irma and Maria underscore the need to be prepared.

Planning for sea level rise is especially important for the U.S. Mid-Atlantic coastal region, including Delaware, due to its high concentration of population and development, critical natural ecosystems, and public infrastructure located near the coast. This region is known as a sea level rise hotspot, where rates of sea level rise are roughly twice the global average because of processes such as weakening of the Gulf Stream and land subsidence. 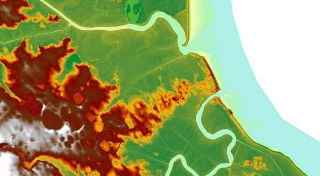 Bowers Beach, DE, between the St. Jones and Murderkill Rivers, Elevation map derived from the statewide LiDAR survey flown in early 2014. Most areas of green show elevation of less than 1 meter with areas of red approx 2 – 4 m. Photo by Wendy Carey and Delaware Environmental Observing System

The Delaware Geological Survey (DGS), based at the University of Delaware, and the Delaware Department of Natural Resources and Environmental Control (DNREC) Delaware Coastal Programs have released a new report updating sea level rise planning scenarios for the state of Delaware. The update was part of Governor Jack Markell’s Executive Order 41, which calls for the periodic update to distribute new guidance to state agencies.

The 2017 report, which replaces a previous report from 2009, recommends planning scenarios that incorporate sea level rise increases of 0.52 meters (1.71 feet), 0.99 meters (3.25 feet) and 1.53 meters (5.02 feet) by the year 2100. The projections are based on recent national and international assessments and academic research and represent different levels of potential sea level rise for state agencies to consider when planning long-term activities.

Additionally, DGS has developed statewide coastal inundation maps based on topographic and elevation data collected in 2014. The maps show in one-foot increments how areas could be impacted by coastal flooding due to sea-level rise or coastal storms. Used with the new report, the maps provide improved information for scientists, engineers, communities and emergency planners to use when planning for sea level rise.

UDaily spoke with David Wunsch, the state geologist for Delaware and director of the Delaware Geological Survey, and John Callahan, a DGS climate scientist and chair of the Delaware Sea level Rise Technical Committee, about sea level rise and how it may affect Delaware.

Q: What factors contribute to sea-level rise and why is Delaware so vulnerable?

Callahan: Sea level rise results from a complex combination of processes that occur simultaneously. Melting of the mountain glaciers and continental ice sheets and thermal expansion—where water molecules expand and take up more space in the ocean due to rising temperatures—combine to raise the surface of the ocean globally. Delaware is particularly vulnerable to sea level rise because its mean elevation is among the lowest nationally at 60 feet. This flat, open coastal topography means that very small vertical increases in the water level can allow water to travel large horizontal distances. At the same time, our region experiences frequent minor and extreme flooding due to coastal storms.

Q: What are some of the short- and long-term effects of sea level rise to Delaware?

Callahan: Ultimately, sea level rise will worsen the coastal flooding issues already present in Delaware. Long-term effects include coastal erosion, conversion of ecologically important tidal wetlands to open water, and gradual damage to roads, property, agricultural fields and forests. Saltwater intrusion into groundwater aquifers could affect our water supply and ultimately the long-term health of plants and animals in the system, too. In the short-term, damage to public infrastructure (e.g., roads, septic tanks, water supply lines) and private property, and the rapid erosion of beach sand from coastal storms are a concern, particularly as it relates to economic impacts on coastal tourism, commercial activities and public safety.

Q: So, what’s the bottom line?

Wunsch: Sea level is rising now and it is affecting Delaware.

While planning for sea level rise is important, planning for changes in the frequency, duration and intensity of extreme water levels from storms is more important in most cases. Sea level rise will continue to increase the frequency and duration of nuisance flooding and exacerbate the impacts of extreme coastal flooding such as beach erosion. It is critical that local, county and state government agencies in Delaware incorporate climate change and sea level rise in all long-term planning activities, particularly when it comes to designing transportation routes or building new infrastructure such as stormwater systems and water treatment plants.

Even with new information, scientists cannot say precisely when or how much sea level rise will occur. This new report provides an estimate of expected changes given today’s data, but it’s important to remember that changes in land use, or significant storm damage over the next 50 years, may affect the coastline and could influence projected outcomes.

Q: How proactive is Delaware when it comes to sea-level rise?

Wunsch: The state released its first planning scenarios in 2009, which were widely used by Delaware stakeholders including the Town of Lewes, Delaware Emergency Management Agency, Wilmington Area Planning Council and the Delaware Climate Change Impact Assessment in their own planning initiatives. In 2014, Delaware was mapped using LiDAR (it stands for Light Detection and Ranging), a laser device that measures the elevation and features of the landscape with high accuracy. This LiDAR data enabled the DNREC Delaware Coastal Programs and DGS to create a series of coastal inundation maps that, along with the updated sea level rise planning scenarios, can inform long-range planning for infrastructure, facilities, land management, land use and capital spending, resulting in better use of tax dollars for projects along coastal areas and public safety improvements through better planning for storm evacuations and other related actions.

Q: What’s changed in the new planning scenarios from those released in 2009?

Callahan: This report uses a new methodology based on a single cohesive framework that incorporates the latest international global climate models, observation data and expert assessments. Although the 2017 planning scenarios of sea level rise by year 2100 are only a few centimeters different than those released in 2009 (scenarios of 0.5, 1.0, and 1.5 meters), the planners and emergency managers can have even greater confidence that they are preparing for realistic possibilities.

Q: How can members of the public educate themselves about sea-level rise?

Wunsch: First, understanding the relative elevations within one’s town, such as the location of low-lying areas that are prone to flooding, is valuable for planning an evacuation route or selecting a safe route to a hospital or shelter during a flood emergency. Similarly, Delaware residents should make an effort to become aware of their critical infrastructure, such as whether their drinking water comes from surface water or groundwater so they understand their relative risk by threats like overland flooding by salt water.

To view the full report, compiled by a technical committee composed of regional scientists and planners, visit the Delaware Geological Survey webpage.