What Causes Hot Flushes during Menopause?

Hot flushes are not “in the head,” but new research suggests they may start there. A UA research team has identified a region in the brain that may trigger the uncomfortable surges of heat most women experience in the first few years of menopause.

Hot flushes – also called hot flashes – affect millions of people, and not just women. Yet, it is still unclear what causes the episodes of temperature discomfort, often accompanied by profuse sweating.

Now a team of researchers around Dr. Naomi Rance, a professor in the department of pathology at the UA College of Medicine, has come closer to understanding the mechanism of hot flushes, a necessary step for potential treatment options down the road. This research was published recently in the Proceedings of the National Academy of Sciences.

The team identified a group of brain cells known as KNDy neurons as a likely control switch of hot flushes. KNDy neurons (pronounced “candy”) are located in the hypothalamus, a portion of the brain controlling vital functions that also serves as the switchboard between the central nervous system and hormone signals.

“Although the KNDy neurons are a very small population of cells, our research reveals that they play extremely important roles in how the body controls its energy resources, reproduction and temperature,” said Melinda Mittelman-Smith, who led the study as part of her doctoral thesis. “They are true multitaskers.”

By studying KNDy neurons in rats, the research team created an animal model of menopause to elucidate the biological mechanisms of temperature control in response to withdrawal of the hormone estrogen, the main trigger of the changes that go along with menopause. 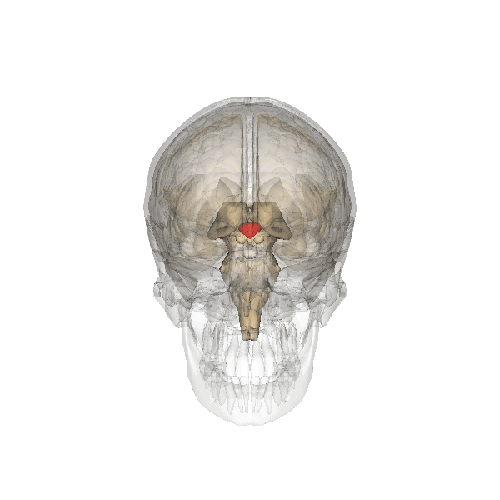 An important switchboard between the brain and the body's hormonal system, the hypothalamus (red) is where the KNDy neurons - the potential triggers of hot flushes - reside. (Image credit: Life Science Databases (LSDB), Japan, Creative Commons License)

They discovered that tail skin temperature was consistently lower in rats whose KNDy neurons were inactivated, suggesting the neurons control a process known as vasodilation, or widening of the blood vessels to increase blood flow through the skin.

“The hallmark of hot flushes is vasodilation,” explained Rance, who also is a neuropathologist at The University of Arizona Medical Center. “When you flush, your skin gets hot and you can see the redness of the skin. It is an attempt of the body to get rid of heat, just like sweating. Except that if you were to measure core temperature at that point, you would find it is not even elevated.”

Although the results are not yet directly applicable in helping individuals affected by hot flushes, they mark a necessary first step, Rance said. 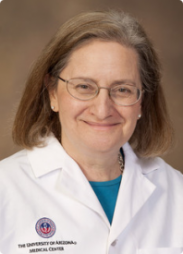 Through her studies, Dr. Naomi Rance has worked out the neuroanatomy of KNDy neurons and discovered how they participate in important life functions such as reproduction and body temperature regulation. (Photo by: UA Biomedical Communications)

“Obviously we can’t do these studies in women, and only if we understand the mechanism is there a chance of developing therapies. All that is known so far is that dwindling estrogen levels have something to do with it but anything after that is a black box.”

“Right now the only effective way of treating flushes is estrogen-replacement therapy. If we could figure out what is causing those flushes, we could try to develop a better, more targeted therapy.”

Rance said hot flushes usually last for four or five years and occur in up to 80 percent of women but also in men undergoing certain hormone treatments for prostate cancer.

“For some people it’s not too bad, but it can be very severe in other individuals; they loose sleep et cetera. So the question I have been asking myself is, ‘How come we haven’t figured this out?’”

Together with her coworkers, Rance has studied KNDy neurons and their functions for two decades.

“KNDy neurons respond to circulating estrogens,” Mittelman-Smith explained. “When these hormones are at very low levels, as is the case in menopause, these neurons go haywire if you will. They grow very large and manufacture several times more neurotransmitter than they did with estrogens present.”

“Because the neurons talk to known thermoregulatory centers of the brain, we think this increased signaling activity may inappropriately tell the body, ‘I’m hot, release heat.’ This triggers heat loss mechanisms like sweating and opening up of blood vessels in the skin.”

Analogous to women going through menopause, the tail skin temperature goes up in rats after removal of the ovaries, where estrogen is produced.

“Rats regulate heat dissipation with their tail because the rest is covered by fur,” Rance explained. “In rats without ovaries, the lack of estrogen causes vasodilation, which we can measure as increased tail skin temperature.”

“Once we knew that estrogen really does control tail skin temperature in a rat, we wanted to know what role, if any, the KNDy neurons play in this.”

“They have lower levels of vasodilation,” Rance said. “It is very consistent. Their tail skin temperature is lower than rats with normal KNDy neurons and stays low. It doesn’t matter if they have estrogen or not; it doesn’t matter if it’s night or if it’s day.”

“The rats didn’t seem unhappy at all,” she added. “You’d think they’d be curling up and shivering, but no. There was no difference in the core temperature, so they weren’t internally cold. We did all the activity measurements and found them to be completely normal. We couldn’t tell a difference other than lower vasodilatation.”

Rance said she is not surprised that the same neuronal switches that are important for reproduction also control thermoregulation.

“Being able to regulate body temperature is very important for the species and also for reproduction because it is important for a pregnant woman to avoid extreme hyperthermia. Hot flushes are a symptom of hyperactivity of these neurons.”

The researchers caution that while KNDy neurons are critical for normal thermoregulation, they are by no means the sole center for managing body temperature.

Rance added: “I wouldn’t say we solved the problem, but we have a good clue about what could be causing the flushes.”

The other members of the research team and authors of the study are: Hemalini Williams, a master’s student in the UA’s physiology program; Sally Krajewski-Hall, a research associate in Rance’s lab; and Nathaniel McMullen, a professor emeritus in the UA’s department of cellular and molecular medicine.