In 1985, a computer science team at Université de Montréal made animated film history by creating one of the first ever digital characters, named Tony de Peltrie. Their six-minute film, which received a standing ovation by computer graphics designers at a festival in San Francisco, marked a turning point in computer-generated imagery (CGI). The film’s creators were able to produce a human face that, although rudimentary, was able to communicate emotions to the audience in a convincing manner.

In retrospect, Tony seems rather crude. Today, CGI can result in images with startling reality, which is precisely were Derek Nowrouzezahrai steps in. “My work focuses on creating the most realistic computer-generated images possible, specifically in the simulation of how light reflects and diffuses in a scene, how fluids realistically interact with their environment, and how shadows are formed,” he said. Nowrouzezahrai joined Université de Montréal’s Department of Computer Science and Operations Research as an assistant professor in January 2012. His work is an equal mix of computer programming, mathematics, physics and art.

What makes a computer-generated image easily distinguishable from a photo is often subtle and sometimes eludes our conscious perception. The shadows of an object onto others or itself, for example, can be projected in various directions and with varying intensities depending on the placement and number of light sources in a scene. This light will be reflected differently depending on the nature and texture of the illuminated object. Nowrouzezahrai’s algorithms aim to reproduce these fine details. 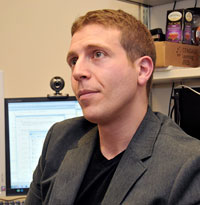 Movement is also one of the professor’s CGI specialties. For example, how does a pen behave when it falls on a table? How does light from a car headlight diffuse through fog? What are the expected changes in light when a character moves through a place as complex as a gothic cathedral? “Such simulations must consider the overall structure of the scene as well as the local reflectance properties of the object or character,” Nowrouzezahrai explained.

To add to the complexity of the work, Professor Nowrouzezahrai develops simulation algorithms that operate in real time, i.e., that generate realistic images interactively as the scene and its contents change. Such systems are particularly useful in video games – where the actions of a player can affect the virtual environment – or in architectural design, where users move around objects in order to decorate a virtual building or house. “Real-time simulations are faster but typically less accurate than their offline counterparts,” Nowrouzezahrai said. “We are working to bridge the gap between these two families of techniques in order to combine real-time performance with offline accuracy.”

The human face and the subtlety of its expressions is among the most difficult simulations to produce in CGI. “When you look at a computer-generated face pixel-by-pixel, the results can be nearly 99.9% correct. However, once you step back, you can almost immediately sense that something is not right. Finding a solution to this missing 0.1% is a huge open challenge in computer graphics,” Nowrouzezahrai said. When he discovered Tony de Peltrie for the first time, he was impressed by the results. But can we continue to push the envelope and eventually reproduce reality perfectly? “It was extremely difficult to achieve this level of precision in the 80s,” he said. “Twenty years ago, we thought we had reached the limit. In my opinion, until we can produce CGI images, in the blink of an eye, that are indistinguishable from reality, computer graphics will have plenty of interesting problems to solve. I’d optimistically say we are at least 20 or 30 years away.”

Professor Nowrouzezahrai has worked for Disney Research in Zurich, which is linked to the Swiss Federal Institute of Technology in Zurich (ETH Zurich), and many of his algorithms are used in Walt Disney productions. He however chose Montreal to pursue his career because, in his opinion, the city offers great potential for computer graphics due to the presence of companies like Ubisoft and Softimage, the latter having been founded by the creator of Tony de Peltrie.

Furthermore, “Université de Montréal excels in research and teaching,” Nowrouzezahrai said. “It is of great advantage to be able to combine theory and practice in such an energetic environment.” And, on that note, Nowrouzezahrai is looking for students who are interested in graduate work in the field of computer graphics. Candidates can propose their own research projects, which he will evaluate according to academic and market criteria, or participate in research activities that are already underway in the areas of fluid simulation, light transport, and animation.