Were Dinosaurs Cold-Blooded or Warm-Blooded? Neither, Study Finds

A study that originated in the lab of UA biologist Brian J. Enquist with UA alum John Grady suggests dinosaurs had a metabolism that was neither warm- nor cold-blooded, but somewhere in between.

Dinosaurs dominated the Earth for more than 100 million years, but all that remains today are bones. This has made it difficult to solve a long-standing and contentious puzzle: Were dinosaurs cold-blooded animals that lumbered along or swift warm-blooded creatures like those depicted in “Jurassic Park”?

The answer, according to scientists at the University of Arizona and the University of New Mexico, is neither. Instead, dinosaurs took a middle path between warm-blooded mammals, or endotherms, and cold-blooded reptiles, or ectotherms. 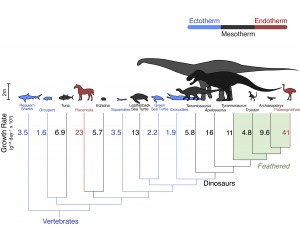 Growth rates across an evolutionary tree. Dinosaurs’ growth rates fall in between warm-blooded mammals and birds (endotherms) in red, and cold-blooded fish and reptiles (ectotherms) in blue. They are closest to living mesotherms such as tuna and leatherback turtles. Illustration courtesy of John Grady (Click image to enlarge)

“Our study shows that dinosaurs did not fit into this current dichotomy of warm- versus cold-blooded,” said Brian J. Enquist, a professor in the UA Department of Ecology and Evolutionary Biology. “Instead, their metabolism was somewhere in between.”

“Most dinosaurs were probably mesothermic – a thermally intermediate strategy that only a few species, such as egg-laying echidnas or great white sharks, use today,” added John Grady, the lead author of the study and currently a biology doctoral student at UNM who began the research as an undergraduate in Enquist’s lab. He graduated from the UA in 2007 with a bachelor’s in ecology and evolutionary biology.

The study, “Evidence for mesothermy in dinosaurs,” published in the journal Science, is the first to quantitatively explore the relationship between growth rates and metabolic rates across a broad sampling of animals and extend that to long-extinct animals such as dinosaurs.

In addition to solving the age-old question about the metabolism that fueled dinosaurs, the results can be used to predict metabolic rates based on how fast an organism grows, and then use those rates to predict the metabolism of long-extinct creatures, Enquist explained.

Except, how does one figure out how fast animals grew when they haven’t been around for many millions of years?

Not only that, but scientist can measure the mass of an animal by the bones it left behind as well.

“A small-mass mammal will have narrow, spindly bones, while a large animal will have thick and hefty bones,” Enquist said. “There are mathematical relationships between bone dimensions and body mass. So if you measure the dimensions of a fossil femur bone, you have a very good measure of the mass of the extinct animal.”

“In short, we can use our theory to travel back in time and reveal the metabolic secrets of the dead,” he added. 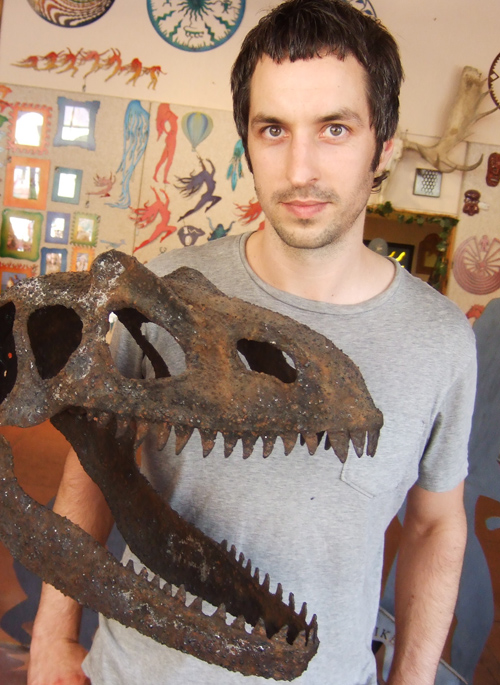 In the study published in the journal Science, UA alum John Grady quantitatively explored the relationship between growth rate and metabolic rates in animals and extends that to long extinct animals such as dinosaurs. (Photo courtesy of UNM)

The discovery exemplifies the ideal scenario that can result from the UA’s 100 percent engagement initiative, which aims to get students involved in real-world experience, including research, before they graduate. The seed for this study can be traced back to when Grady was an undergraduate at the UA and wanted to immerse himself in scientific research.

“John came to me with an interest in taking my graduate class Scaling in Biology, and wanted to do research with dinosaurs,” Enquist said. “I was working on a theory called Metabolic Scaling Theory that showed that if you compile growth rate data, you can infer differences in metabolism between organisms. What was missing was a large dataset on growth rates across many different organisms to test the theory. I knew that many studies existed that had compiled growth rates from extinct animals, including dinosaurs, and that there were many studies reporting growth rates of various living animals, so it seemed like a unique opportunity to test and apply the theory.”

Using an extensive database of animal growth and energy use developed by Grady, the researchers first demonstrated that animals that grow faster not only require more energy but also have higher body temperatures. Then, using growth estimates made by paleontologists for dinosaurs, the researchers calculated the metabolic rates of various dinosaur species.

“Archaeopteryx, the first bird,” Grady explained, “took two years to reach maturity. But a red-tailed hawk, which is about the same size, only takes 6 weeks.”

While dinosaurs didn’t grow as fast as modern birds or mammals, they did grow significantly faster than modern reptiles.

“This higher energy use probably increased speed and performance,” Grady said. “Mesothermic dinsoaurs were likely faster predators or better able to flee from danger than the large reptiles found earlier in during the Mesozoic.”

Mesothermy may have helped dinosaurs become ecologically dominant and probably also helped them become enormous. Because being warm-blooded requires a steady food supply, most animals with that type of metabolism don’t grow past a certain size.

“A lion the size of a T-Rex, while a frightening thought, would quickly starve to death because it would be so hard to find enough food,” said Felisa Smith, Grady’s adviser at UNM and a co-author on the study.

By adopting a medium-powered energetic strategy, mesothermy may have provided the perfect solution. “It allows a performance advantage over ectothermic reptiles, but without the high overhead costs of modern birds and mammals,” Grady said.

“In any case, it was a successful formula for a long reign in the Mesozoic,” Smith added.

The National Institutes of Health supported the research with fellowships awarded to Grady and two fellow graduate students, Eva Dettweiler-Robinson and Natalie Wright, also at UNM.

– By Daniel Stolte and Steve Carr