Mile-a-minute weed has declared war on Doug Tallamy’s yard. This non-native, invasive vine is growing up his trees, scrambling over shrubs and smothering tree seedlings. By blocking sunlight, it weakens a plant by reducing its ability to photosynthesize.

Mile-a-minute doesn’t care one whit that Tallamy, professor and chair of the University of Delaware’s Department of Entomology and Wildlife Ecology, is a highly respected proponent of native gardening who doesn’t believe in planting any non-natives, let alone a highly invasive non-native.

“The deer brought mile-a-minute from our neighbor’s yard three years after we moved in,” says Tallamy. “We had just a few plants the first year, a few hundred the second year, and 20 trillion the third year.”

Accidentally introduced to the U.S. from China in the 1930s, mile-a-minute doesn’t actually grow a mile per minute but it definitely is prolific. Studies show it can grow six inches per day. In addition to Tallamy’s yard, it has waged battle on countless other area yards as well as on Pea Patch Island, at White Clay Creek State Park, at Coverdale Farm Preserve and at other important natural areas.

Chemical control measures aren’t very effective and native insects don’t like to eat mile-a-minute. So Tallamy hand pulls mile-a-minute and, in areas where it has spread widely, whacks it with a scythe. But thanks to UD colleague Judy Hough-Goldstein, Tallamy has another tool in his arsenal, a weevil known as Rhinoncomimus latipes.

Weevils are beetles that have snouts. The itsy-bitsy Rhinoncomimus latipes, a native of China, is host-specific to mile-a-minute; it won’t eat any other plant. Since 2004, Hough-Goldstein and cooperators have released Rhinoncomimus latipes at numerous sites in Delaware and in Chester County, Pa., including Tallamy’s backyard. 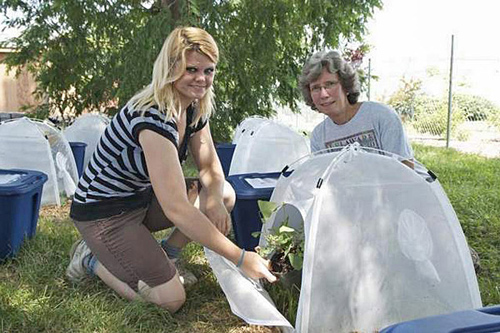 UD student Amanda Stout (left) with Judy Hough-Goldstein, professor of entomology and wildlife ecology who is studying the use of weevils in controlling mile-a-minute weed. Photo by Danielle Quigley

A professor of entomology who has spearheaded a number of groundbreaking research projects into the biological control of invasive plants, Hough-Goldstein had to conduct eight years of laboratory testing in quarantine before the federal government would permit fieldwork to be carried out.

She was the first researcher in the world to obtain a permit to release a biological control agent of mile-a-minute weed. Today, her lab is still the only one in the U.S. — and one of a handful in the world — attempting to control this invasive plant through biological means.

Results, thus far, have been encouraging. The weevil establishes easily because it produces multiple generations per year. Thus, only a couple hundred weevils need to be released at any one site. Adult weevils and their larvae eat and damage mile-a-minute, but even more importantly, appear to suppress seed production in the plant.

“We had a problem with mile-a-minute at Burrows Run, which is part of Coverdale Farm Preserve,” notes Dave Pro, a land and facilities steward for the Delaware Nature Society. “We participated in UD’s early field studies with Rhinoncomimus latipes and followed up with a second weevil release. Since then, we’ve seen a reduction of mile-a-minute vine and weevils have been found actively feeding.”

In June, Hough-Goldstein kicked off a new phase of her research. The U.S. Forest Service is funding a study that compares the performance of weevils already in the field against lab-reared weevils and field weevils direct from China.

“Currently, weevils that are sent to cooperators throughout the northeastern U.S. come from a Beneficial Insect Laboratory operated by the New Jersey Department of Agriculture,” says Hough-Goldstein. “However, insects that are lab-reared for 10 or more generations adapt to lab conditions and this can sometimes affect their field performance. We’ll compare the survival, longevity and reproductive abilities of the three different populations of weevils to see if it may be desirable to add wild-type genetic material to the rearing stock.”

Amanda Stout is a rising junior at UD who is participating in the Summer Scholar research program. Throughout the summer, she will be responsible for most of the fieldwork for the new project.

To her delight, she has discovered that this means doing a bit of everything. “With Dr. Hough-Goldstein’s help, I designed and constructed rearing tubs for the weevils,” says Stout. “I also spent several days installing ‘bug dorms’ in full sun as well as in full shade.”

“I really gain intellectual satisfaction out of my work at the end of the day. It’s really exciting to get results,” she says.

As for Tallamy’s backyard, weevils are making in-roads in the ongoing war against mile-a-minute, with certain limitations.

“My assessment of the weevil is that it is quite effective in dry years,” says Tallamy. “But it doesn’t outpace mile-a-minute in wet years, such as last year when we had 12 more inches of rain than usual. However, the weevils are munching away at mile-a-minute this summer, so I’m happy to have them in my yard.”