Ways Google Glass Would Be Great for Gaming

Many are speculating the possibilities for the new Google Glass – a wearable computer that displays a screen in front of your eye that you can control by voice command – in industries, such as medicine and education.

One industry in particular that has people excited about the possibilities for using the device is the gaming industry. The Google glass can take gaming to a completely different level in all genres of gaming.

Multiplayer system, role-playing (RPGs) and first-person shooting (FPS) games could potentially be more efficient to play and participate in. The glass right in front of your eye places you in the hub of the action, allowing players to nearly be face-to-face and eye-to-eye with the opponents in their games. What’s more, there is the potential of better accuracy when shooting, with the glass serving as your pinpoint target.

You could use voice command to move, have your phone serve as the game console or have the Glass serve as your second screen in conjunction with your smartphone. 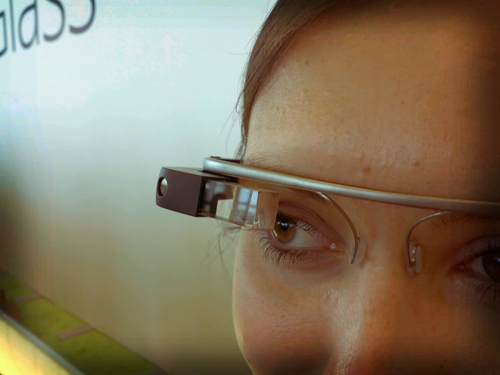 Social media and turn-based-match games could get a revamping too.

Imagine playing Words with Friends or any other trivia, puzzle or board game by switching to and from the game and main screen with ease (and without ever having to look at your phone). Simply say, “Ok Glass”, followed by your command to make your moves in a game.

Your interactions with peers would be different (for the better) as well. Peer games, such as “I Spy”, would be reinvented by combining what your friend sees from your glasses of your surroundings into a game for you.

Educational games would be more fun for kids and adults alike. Google Glass could be best incorporated into educational games, such as when people want to learn to drive. For example, they can pop on Google Glass and practice online at parking games.com/car/. They can also learn a new sport or pretend that they are in the NFL, keeping an eye on the ball for an incoming pass, for instance.

Are you into construction and management simulation games? Those would feel realistic too, and presumably be as quite addicting. Other simulation games, such as racing or parachuting out of a plane, would also feel like the real deal.

People can get moving on their feet in exploration-themed games, maze games or RPGs, while the Glass keeps track of where you are in the real world for your safety with its sensors.

This would work too with a game designed specifically for exercising to keep people active. Run, jump and climb in the real world as well as in your virtual gaming world.

In essence, you can make a game out of everyday life with Google Glass. For instance, waiting in line at the supermarket would not be so bad if you could wear the Glass to provide distraction with a game during this, oftentimes, unpleasant experience. It would be interesting as well if there was an application created to turn the experience itself into a game.

For Google Glass and the gaming industry, the possibilities are endless.

Marcela De Vivo is a freelance writer from Southern California whose writing covers a range of industries, including technology, health and marketing. She agrees that not only would Google Glass be beneficial for professional use, but in the gaming industry as well.