Grocery delivery service is greener than driving to the store

At the end of a long day, it can be more convenient to order your groceries online while sitting on the living room couch instead of making a late-night run to the store. New research shows it’s also much more environmentally friendly to leave the car parked and opt for groceries delivered to your doorstep.

“A lot of times people think they have to inconvenience themselves to be greener, and that actually isn’t the case here,” said Anne Goodchild, UW associate professor of civil and environmental engineering. “From an environmental perspective, grocery delivery services overwhelmingly can provide emissions reductions.”

This diagram shows how a delivery truck can save on mileage when compared with personal vehicles driving to and from a store. Image credit: Goodchild/Wygonik

Consumers have increasingly more grocery delivery services to choose from. AmazonFresh operates in the Seattle area, while Safeway’s service is offered in many U.S. cities. FreshDirect delivers to residences and offices in the New York City area. Last month, Google unveiled a shopping delivery service experiment in the San Francisco Bay Area, and UW alumni recently launched the grocery service Geniusdelivery in Seattle.

As companies continue to weigh the costs and benefits of offering a delivery service, Goodchild and Erica Wygonik, a UW doctoral candidate in civil and environmental engineering, looked at whether using a grocery delivery service was better for the environment, with Seattle as a test case. In their analysis, they found delivery service trucks produced 20 to 75 percent less carbon dioxide than the corresponding personal vehicles driven to and from a grocery store.

They also discovered significant savings for companies – 80 to 90 percent less carbon dioxide emitted – if they delivered based on routes that clustered customers together, instead of catering to individual household requests for specific delivery times.

“What’s good for the bottom line of the delivery service provider is generally going to be good for the environment, because fuel is such a big contributor to operating costs and greenhouse gas emissions,” Wygonik said. “Saving fuel saves money, which also saves on emissions.” 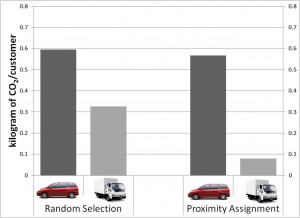 A comparison of carbon dioxide produced per customer for personal vehicles and delivery vehicles. The bars on the left represent a system in which customers choose their delivery times. The right side shows a more efficient system whereby the delivery service sets delivery times. Image credit: Goodchild/Wygonik (Click image to enlarge)

The UW researchers compiled Seattle and King County data, assuming that every household was a possible delivery-service customer. Then, they randomly drew a portion of those households from that data to identify customers and assign them to their closest grocery store. This allowed them to reach across the entire city, without bias toward factors such as demographics and income level.

They used an Environmental Protection Agency modeling tool to calculate emissions at a much more detailed level than previous studies have done. Using factors such as vehicle type, speed and roadway type, they calculated the carbon dioxide produced for every mile for every vehicle.

Emissions reductions were seen across both the densest parts and more suburban areas of Seattle. This suggests that grocery delivery in rural areas could lower carbon dioxide production quite dramatically.

“We tend to think of grocery delivery services as benefiting urban areas, but they have really significant potential to offset the environmental impacts of personal shopping in rural areas as well,” Wygonik said.

Work commuters are offered a number of incentives to reduce traffic on the roads through discounted transit fares, vanpools and carpooling options. Given the emissions reductions possible through grocery delivery services, the research raises the question of whether government or industry leaders should consider incentives for consumers to order their groceries online and save on trips to the store, Goodchild said.

In the future, Goodchild and Wygonik plan to look at the influence of customers combining their grocery shopping with a work commute trip and the impact of the delivery service’s home-base location on emissions.