Was that my phone?

ANN ARBOR — Has this ever happened to you: You think you hear your cell phone ring or ping, or feel it vibrate, but then look to find no call or message?

It’s not uncommon among cell phone users, but you may have these experiences more frequently if you crave reassurance from your social relations, according to research from the University of Michigan.

Conversely, people that tend toward attachment avoidance, who push others away to maintain a psychological distance, are less likely to report phantom cell phone experiences when thinking about things for which they might be contacted.

“The cell phone often is your connection to your outside social world, and those people who crave reinforcement of their relationships will carry that into the social media space,” Kruger said. 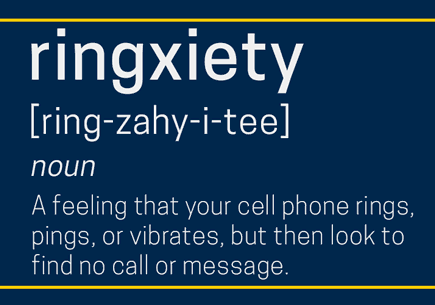 There was no relationship found for individual levels of sensation-seeking, general cravings for stimulation.

Kruger said the research on what he calls “high ringxiety,” reported in the current issue of Cyberpsychology, Behavior and Social Networking, is among the first to tie phantom signals to psychological attributes, an area that needs further study.

“Overall, these experiences represent a minor annoyance, but those who suffer from relationship anxiety might reconsider their dependence on social media, if receiving these phantom signals frequently causes distress,” he said.

Kruger’s team studied responses from 411 U-M students through two separate surveys to determine the number of times they experienced phantom cell calls or sensations. Phantom vibration was the most frequently cited experience for 75 percent of the respondents, followed by phantom notification then ringing.