Resurrecting Lonesome George: Relatives of extinct species of tortoise studied in the Galapagos

A Yale team spent the last part of November in the Galapagos gathering dozens of giant tortoises that carry the DNA of extinct species that used to roam two islands in the famous chain.

Adalgisa “Gisella” Caccone of Yale and her team had recently found genetic evidence that tortoises on the remote part of Wolf Island in the Galapagos were related to two extinct species of giant tortoises that once roamed the islands of Pinta and Floreana. Some of these tortoises were relatives of the iconic Lonesome George, the last of his species and mourned worldwide after his death in 2012. Researchers speculate that whalers — who used to store tortoises for food for long voyages — might have thrown the animals overboard near Wolf Island more than 150 years ago. 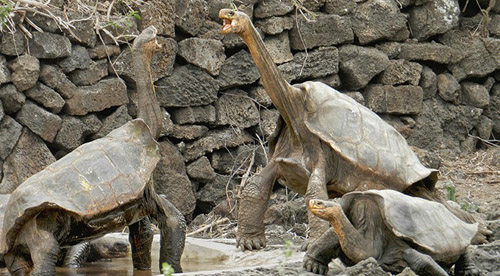 Two males get acquainted in their new homes. The one on the left, researchers say, is a spitting image of Lonesome George. (Photo by Joe Flanagan)

As part of an international effort, the Yale team helped collect the tortoises and bring them to Santa Cruz Island, where after further genetic analysis they hope to soon begin a targeted mating program in hopes of breeding close genetic relatives of the two extinct species and then releasing them on Floreana and Pinta. This is the first conservation program of this sort.

Caccone said she is optimistic that good mating pairs might be found — and not just because of the genetic relationships her lab as uncovered. All the giant tortoises retrieved have the massive saddleback dome characteristic of Lonesome George and the extinct species on both Pinta and Floreana. (The native species V. Wolf has a cupola-shaped dome.) 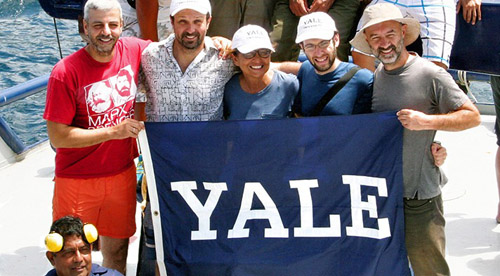 The efforts are receiving international attention: