*The UA-led research, based on climate models, shows that melting of the ice sheets will occur in this century and next.

Warming of the ocean’s subsurface layers will melt underwater portions of the Greenland and Antarctic ice sheets faster than previously thought, according to new University of Arizona-led research. Such melting would increase the sea level more than already projected.

The research, based on 19 state-of-the-art climate models, proposes a new mechanism by which global warming will accelerate the melting of the great ice sheets during this century and the next. 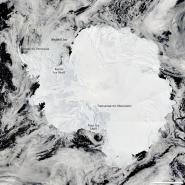 The Moderate Resolution Imaging Spectroradiometer on NASA’s Aqua satellite captured this composite image of Antarctica’s ice-covered landscape on Jan. 27, 2009. The surface appears rough where the Transantarctic Mountains curve in a shallow “s” from the shore of the Ross Sea to the Ronne Ice Shelf. The Polar Plateau in the center of the continent is smooth, shaded only by the faint shadow cast by clouds. The Weddell Sea is textured with chunks of sea ice. (Photo Credit: NASA image courtesy the MODIS Rapid Response Team at NASA GSFC)

The subsurface ocean layers surrounding the polar ice sheets will warm substantially as global warming progresses, the scientists found. In addition to being exposed to warming air, underwater portions of the polar ice sheets and glaciers will be bathed in warming seawater.

“To my knowledge, this study is the first to quantify and compare future ocean warming around the Greenland and the Antarctic ice sheets using an ensemble of models,” said lead author Jianjun Yin, a UA assistant professor of geosciences.

Most previous research has focused on how increases in atmospheric temperatures would affect the ice sheets, he said.

Along the Greenland coast, that layer would warm twice as much, but along Antarctica would warm less, only 0.9 F (0.5 C).

“No one has noticed this discrepancy before – that the subsurface oceans surrounding Greenland and Antarctica warm very differently,” Yin said.

Part of the warming in the North comes from the Gulf Stream carrying warm subtropical waters north. By contrast, the Antarctic Circumpolar Current blocks some of the subtropical warmth from entering the Antarctic’s coastal waters. 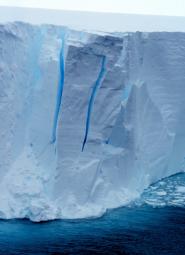 This view of the seaward edge of Antarctica’s floating Ross Ice Shelf shows a region where the ice is cracking and may produce an iceberg. (Photo credit: Michael Van Woert, NOAA NESDIS, ORA. National Oceanic and Atmospheric Administration/Department of Commerce)

Even so, the Antarctic ice sheet will be bathed in warming waters, the team writes.

Co-author Jonathan T. Overpeck said, “This does mean that both Greenland and Antarctica are probably going melt faster than the scientific community previously thought.”

Overpeck, a UA professor of geosciences and co-director of the UA’s Institute of the Environment, said, “This paper adds to the evidence that we could have sea level rise by the end of this century of around 1 meter and a good deal more in succeeding centuries.”

The paper by Yin, Overpeck and their colleagues, “Different Magnitudes of Projected Subsurface Ocean Warming Around Greenland and Antarctica,” was published online in Nature Geoscience on July 3.

Other researchers have recently measured surprisingly high subsurface ocean temperatures along coastal glaciers in Greenland, Yin said. In addition, scientists have reported the Greenland and Antarctica glaciers that empty into the sea are moving faster.

Yin decided to figure out how much those subsurface currents would warm during this century and the next.

This satellite image shows Greenland’s Helheim glacier where it meets the sea. The glacier is on the left. Large and small icebergs pack the narrow fjord in the right part of the images. Bare ground appears brown or tan, while vegetation appears in shades of red. The Advanced Spaceborne Thermal Emission and Reflection Radiometer on NASA’s Terra satellite took the image in June 2005. (Photo credit: NASA images created by Jesse Allen, Earth Observatory, using data provided courtesy of NASA/GSFC/METI/ERSDAC/JAROS, and the U.S./Japan ASTER Science Team)

Glaciers are rivers of ice. Like rivers of liquid water, glaciers move downhill. Some glaciers melt before reaching the ocean, and others, called tidewater glaciers, flow all the way to the sea.

The face of a tidewater glacier visible from a boat is only part of it – much of the glacier’s leading edge is underwater in a deep fjord.

Ultimately, those glaciers will melt back so far they no longer reach the sea, the team writes.

Yin’s next step is examining climate models that can zero in even further on the regional effects of climate warming on the subsurface ocean and the ice sheets.