PASADENA, Calif. — Scientists analyzing data from NASA’s Cassini spacecraft now have the first-ever, up-close details of a Saturn storm that is eight times the surface area of Earth.

On Dec. 5, 2010, Cassini first detected the storm that has been raging ever since. It appears approximately 35 degrees north latitude of Saturn. Pictures from Cassini’s imaging cameras show the storm wrapping around the entire planet covering approximately 2 billion square miles (4 billion square kilometers).

The storm is about 500 times larger than the biggest storm previously seen by Cassini during several months from 2009 to 2010. Scientists studied the sounds of the new storm’s lightning strikes and analyzed images taken between December 2010 and February 2011. Data from Cassini’s radio and plasma wave science instrument showed the lightning flash rate as much as 10 times more frequent than during other storms monitored since Cassini’s arrival to Saturn in 2004. The data appear in a paper published this week in the journal Nature.

“Cassini shows us that Saturn is bipolar,” said Andrew Ingersoll, an author of the study and a Cassini imaging team member at the California Institute of Technology in Pasadena, Calif. “Saturn is not like Earth and Jupiter, where storms are fairly frequent. Weather on Saturn appears to hum along placidly for years and then erupt violently. I’m excited we saw weather so spectacular on our watch.”

At its most intense, the storm generated more than 10 lightning flashes per second. Even with millisecond resolution, the spacecraft’s radio and plasma wave instrument had difficulty separating individual signals during the most intense period. Scientists created a sound file from data obtained on March 15 at a slightly lower intensity period. 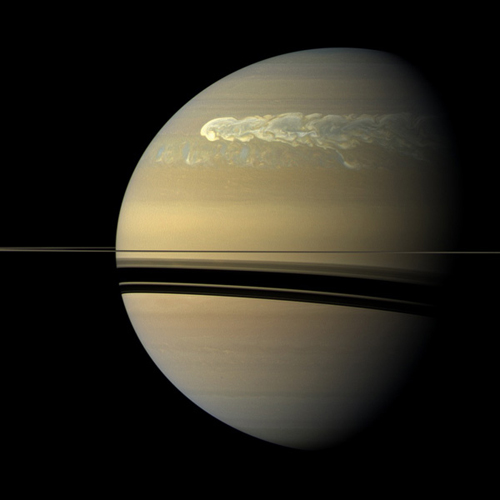 The huge storm churning through the atmosphere in Saturn's northern hemisphere overtakes itself as it encircles the planet in this true-color view from NASA’s Cassini spacecraft. Image credit: NASA/JPL-Caltech/SSI

“This storm is thrilling because it shows how shifting seasons and solar illumination can dramatically stir up the weather on Saturn,” said Georg Fischer, the paper’s lead author and a radio and plasma wave science team member at the Austrian Academy of Sciences in Graz. “We have been observing storms on Saturn for almost seven years, so tracking a storm so different from the others has put us at the edge of our seats.”

The storm’s results are the first activities of a new “Saturn Storm Watch” campaign. During this effort, Cassini looks at likely storm locations on Saturn in between its scheduled observations. On the same day that the radio and plasma wave instrument detected the first lightning, Cassini’s cameras happened to be pointed at the right location as part of the campaign and captured an image of a small, bright cloud. Because analysis on that image was not completed immediately, Fischer sent out a notice to the worldwide amateur astronomy community to collect more images. A flood of amateur images helped scientists track the storm as it grew rapidly, wrapping around the planet by late January 2011.

The Cassini-Huygens mission is a cooperative project of NASA, the European Space Agency and the Italian Space Agency. NASA’s Jet Propulsion Laboratory in Pasadena manages the mission for the agency’s Science Mission Directorate in Washington. The radio and plasma wave science team is based at the University of Iowa, Iowa City, where the instrument was built. The imaging team is based at the Space Science Institute in Boulder, Colo. JPL is a division of the California Institute of Technology, Pasadena.

For more information about the Cassini-Huygens mission, visit https://saturn.jpl.nasa.gov and https://www.nasa.gov/cassini.