War, Plague No Match for Deforestation in Driving CO2 Buildup

Stanford, CA —  Genghis Khan and his Mongol hordes had an impact on the global carbon cycle as big as today’s annual demand for gasoline. The Black Death, on the other hand, came and went too quickly for it to cause much of a blip in the global carbon budget. Dwarfing both of these events, however, has been the historical trend towards increasing deforestation, which over centuries has released vast amounts of carbon dioxide into the atmosphere, as crop and pasture lands expanded to feed growing human populations. Even Genghis Kahn couldn’t stop it for long. 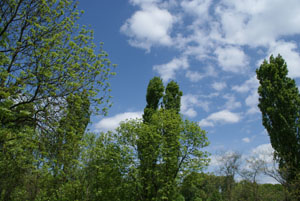 “It’s a common misconception that the human impact on climate began with the large-scale burning of coal and oil in the industrial era,” says Julia Pongratz of the Carnegie Institution’s Department of Global Ecology, lead author of a new study on the impact of historical events on global climate published in the January 20, 2011, online issue of The Holocene. “Actually, humans started to influence the environment thousands of years ago by changing the vegetation cover of the Earth‘s landscapes when we cleared forests for agriculture.”

Clearing forests releases carbon dioxide into the atmosphere when the trees and other vegetation are burned or when they decay. The rise in atmospheric carbon dioxide resulting from deforestation is recognizable in ice cores from Greenland and Antarctica before the fossil-fuel era.

But human history has had its ups and downs. During high-mortality events, such as wars and plagues, large areas of croplands and pastures have been abandoned and forests have re-grown, absorbing carbon dioxide from the atmosphere.

Pongratz decided to see how much effect these events could have had on the overall trend of rising carbon dioxide levels. Working with colleagues at the Max Planck Institute for Meteorology in Germany and with global ecologist Ken Caldeira at Carnegie, she compiled a detailed reconstruction of global land cover over the time period from 800 AD to present and used a global climate-carbon cycle model to track the impact of land use changes on global climate. Pongratz was particularly interested in four major events in which large regions were depopulated: the Mongol invasions in Asia (1200-1380), the Black Death in Europe (1347-1400), the conquest of the Americas (1519-1700), and the Fall of the Ming Dynasty in China (1600-1650).

“We found that during the short events such as the Black Death and the Ming Dynasty collapse, the forest re-growth wasn’t enough to overcome the emissions from decaying material in the soil,” says Pongratz. “But during the longer-lasting ones like the Mongol invasion and the conquest of the Americas there was enough time for the forests to re-grow and absorb significant amounts of carbon.”

The global impact of forest re-growth in even the long-lasting events was diminished by the continued clearing of forests elsewhere in the world. But in the case of the Mongol invasions, which had the biggest impact of the four events studied, re-growth on depopulated lands stockpiled nearly 700 million tons of carbon absorbed from the atmosphere. This is equivalent to the world’s total annual demand for gasoline today.

Pongratz points out the relevance of the study to current climate issues. “Today about a quarter of the net primary production on the Earth’s land surface is used by humans in some way, mostly through agriculture,” she says. “So there is a large potential for our land-use choices to alter the global carbon cycle. In the past we have had a substantial impact on global climate and the carbon cycle, but it was all unintentional. Based on the knowledge we have gained from the past, we are now in a position to make land-use decisions that will diminish our impact on climate and the carbon cycle. We cannot ignore the knowledge we have gained.”