Traditionally, there are two types of computer memory devices. Slow memory devices are used in persistent data storage technologies such as flash drives. They allow us to save information for extended periods of time, and are therefore called nonvolatile devices. Fast memory devices allow our computers to operate quickly, but aren’t able to save data when the computers are turned off. The necessity for a constant source of power makes them volatile devices. 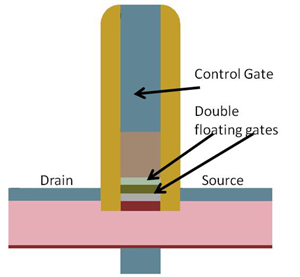 Researchers have developed a single “unified” device that can perform both volatile and nonvolatile memory operation, with applications that could affect computer start times and energy efficiency for internet servers. Image credit: North Carolina State University.

But now a research team from NC State has developed a single “unified” device that can perform both volatile and nonvolatile memory operation and may be used in the main memory.

We’ve invented a new device that may revolutionize computer memory,” says Dr. Paul Franzon, a professor of electrical and computer engineering at NC State and co-author of a paper describing the research. “Our device is called a double floating-gate field effect transistor (FET). Existing nonvolatile memory used in data storage devices utilizes a single floating gate, which stores charge in the floating gate to signify a 1 or 0 in the device – or one ‘bit’ of information. By using two floating gates, the device can store a bit in a nonvolatile mode, and/or it can store a bit in a fast, volatile mode – like the normal main memory on your computer.”

The double floating-gate FET could have a significant impact on a number of computer problems. For example, it would allow computers to start immediately, because the computer wouldn’t have to retrieve start-up data from its hard drive – the data could be stored in its main memory.

The new device would also allow “power proportional computing.” For example, Web server farms, such as those used by Google, consume an enormous amount of power – even when there are low levels of user activity – in part because the server farms can’t turn off the power without affecting their main memory.

“The double floating-gate FET would help solve this problem,” Franzon says, “because data could be stored quickly in nonvolatile memory – and retrieved just as quickly. This would allow portions of the server memory to be turned off during periods of low use without affecting performance.”

Franzon also notes that the research team has investigated questions about this technology’s reliability, and that they think the device “can have a very long lifetime, when it comes to storing data in the volatile mode.”

NC State’s Department of Electrical and Computer Engineering is part of the university’s College of Engineering.