Donating part of his liver and a kidney to two different recipients was not enough for Harry Kiernan. The Vietnam veteran and firefighter is now taking his efforts to raise awareness about organ donation many steps further by walking across the United States.

Kiernan’s 3,300-mile journey began on March 19 at Yale-New Haven Hospital, where a kick off ceremony for “Walk of 2012,” took place under the Donate Life flag near the hospital’s entrance.

Dr. Sukru Emre, the Yale School of Medicine transplant surgeon who performed Kiernan’s kidney donation surgery, was on hand to wish Kiernan well and commend him for his selfless acts.

In front of a large gathering of the donor’s friends, hospital staff, medical students, and organ bank representatives, Emre presented Kiernan with an appreciation plaque from the Yale-New Haven Transplantation Center for his dedication and service to organ donation.

“Mr. Kiernan is one of our heroes, and secondary to his altruistic act he saved two patients lives by donating one of his kidneys and a part of his liver,” said Emre, who is also chief of transplantation at Yale-New Haven Hospital Transplantation Center. 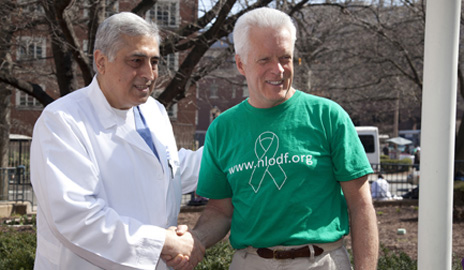 Emre thanked Kiernan on behalf of patients on the waiting list and pointed out that ,like Kiernan, many donors are veterans, firefighters, or policemen. “These individuals were on front lines in many life and death situations and they know how to sacrifice for others, Emre said. “Mr. Kiernan is one of them; He is a unique person who wants to do more in order to increase awareness on donor shortage and organ donation.”

Kiernan is the founder and executive director of the National Living Organ Donors Foundation, which is sponsoring “Walk of 2012”. With each step he takes from the East Coast to the West Coast, Kiernan said, he hopes to increase the number of organ donations, from both deceased and living donors, nationwide.

Kiernan set off to New York from New Haven and expects to arrive in Los Angeles during the first week of July. He said he hopes that everyone he meets along the way will be encouraged to participate and walk with him to help spread the message about the importance of organ donation.