Mesquite trees and woody shrubs are better adapted than grasslands to a Southwestern climate predicted to shift toward higher temperatures and greater variability in rainfall, UA ecologists have discovered.

As the desert Southwest becomes hotter and drier, semi-arid grasslands are slowly being replaced by a landscape dominated by mesquite trees, such as Prosopis velutina, and other woody shrubs, a team of University of Arizona researchers has found.

In a “leaf-to-landscape” approach, the team combined physiological experiments on individual plants and measurements across entire ecosystems to quantify how well grasslands, compared to mesquite trees and woody shrubs, cope with heat and water stress across seasonal precipitation periods.

“Our results show that even the smallest mesquites are better adapted for thriving under elevated temperatures and dry conditions – the projections for our future climate – suggesting that these woody plants are here to stay,” said Greg Barron-Gafford, an associate research professor with the UA’s Biosphere 2 who led the study, which is published in the scientific journal Global Change Biology. 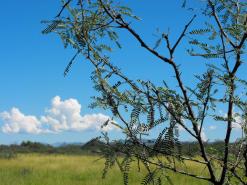 Over the last century, the face of the Southwest has changed. Before heavy cattle grazing, flowing carpets of grass comprised of, for example, Muhly (Muhlenbergia porteri) or Grama grass (Bouteloua eriopoda) blanketed much of Southern Arizona’s open range. Today, woody plants like mesquite trees dominate the landscape.

Native to the region, mesquites have been here for a long time, but not in today’s abundance, Barron-Gafford said. “Visitors that see our experimental display at Biosphere 2 are always surprised to hear that the Sonoran Desert in this area used to look very different a century ago.”

Scientists have evidence to believe woody plants began displacing grasslands as a result of overgrazing, but has since been propelled by changing climate.

“If there are too many cattle, they have the same effect as a lawn mower,” Barron-Gafford said. “They’re tilling the soil, and because they don’t eat the prickly things, they stay away from the established mesquite trees. But they consume their pods and drop them off in little fertilizer islands. It’s a perfect formula for landscape change.”

Mesquite trees, the research team discovered, benefit not only from a changing landscape, but also from a climate shifting toward higher temperatures and greater variability in rainfall.

This was surprising, given that, evolutionarily speaking, grasses are better adapted to hot and dry conditions because they use a modified biochemical pathway for photosynthesis, the process by which plants take in carbon dioxide from the atmosphere and convert it into sugars. 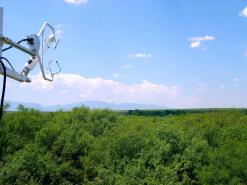 View from a flux tower across a mesquite forest. (Photo: G. Barron-Gafford)

“Plants have to open pores in their leaves to breathe in carbon dioxide, and while their pores are open, water diffuses out,” Barron-Gafford explained. “Compared to grasses, mesquite trees have to keep their pores open longer for the same amount of sugars they make, meaning they lose more water in the process.”

But mesquites overcome their physiological disadvantage with roots that reach down to 160 feet or more; they can tap into groundwater not accessible to plants with shallow root systems.

“Mesquites waste more water, but they can access it much better,” Barron-Gafford said. “Their roots are always out there and they find it, allowing them to bypass the grasses’ evolutionary advantage. These deep-rooting shrubs and trees are accessing deeper water that was previously unavailable to drive plant biology in this area.”

“It levels the playing field,” he said. “In the pre-monsoon season in April and May, when the land is very dry and grasses are browning, the mesquites are leafing out. You could say they have their toes dangling in the groundwater pool. In an athletic analogy, it’s like some sprinters are already running, while the competition is still getting their shoes on. “

“All of the benefits we associate with these shrubs, such as potentially greater carbon capture from our atmosphere, increased shade, attraction of wild life, and so forth come at the cost of greater water use,” he said.

The research aims to improve the models used by climatologists to predict future climate. Current models, said Barron-Gafford, have mostly relied on plant physiology alone. “In an age that will be defined by our management of water resources, it is important to understand the role that this woody plant encroachment has on our regional ecohydrology.”

This modified photo illustrates how flux towers monitor eddies, or pockets of air, with instruments that measure the levels of carbon dioxide and water. "This allows us to estimate how much carbon the ecosystems are pulling in from the atmosphere versus how much water and carbon they are losing," said Greg Barron-Gafford. (Photo: G. Barron-Gafford)

“The known differences in photosynthetic biochemistry have led the scientific community to expect that grasses should be better adapted to a warming climate because they have evolved to be more efficient with less water in higher temperatures and drier conditions.”

The new findings reveal that a plant’s structure – such as deep roots – plays a more important role in how vegetation adapts to a changing environment than leaf physiology.

His research team used a “portable biosphere” to test how plants perform under different environmental conditions and temperatures. The shoebox-sized device can accommodate a leaf or a branch of a living plant and allows the researchers to seal it off from the environment.

The team made its measurements shortly before, during and after the monsoon in the San Pedro Riparian National Conservation Area in Southeastern Arizona.

“With our portable biosphere we can obtain snapshots of plant activity,” Barron-Gafford said. “The device allows us to set and control parameters like temperature, light and relative humidity while we measure the carbon dioxide going in and out of the leaf.”

He explained that the dry periods before and after the monsoon are different from each other because once the monsoon rains cease, plant metabolism is still running on high.

“Everything is cranking, except the remaining rain water is now deep underground, and we are measuring at a time when the shallow-rooted plants no longer have that pool to dangle their toes in. That is when the stress comes back for them.”

Mesquite trees, on the other hand, were found to be capable of running their photosynthetic metabolism at half their maximum rate regardless of whether it was hot and dry.

“Grasses can only function in a very narrow temperature range,” Barron-Gafford said. “While the they are drying out, it’s like a hot day by the pool for the mesquite.”

“A heavy monsoon downpour saturates the soil, but the surface dries off fast because it’s a hot and dry environment,” Barron-Gafford said. “But deeper down, the water remains in the soil longer, where the mesquite can access it, but not the grasses. That is a really important implication because our predicted precipitation patterns over the next century are going to favor deeper rooted mesquite shrubs over shallow-rooted grasses.”

Because they rely much less on rainfall, mesquites should benefit from the forecasted increasing precipitation variability, offering a possible explanation for the observed encroachment of mesquite plants even in areas no longer subjected to heavy grazing.

To monitor the interactions among plants, water, the soil and the atmosphere on an ecosystem-wide scale, researchers with Biosphere 2 and The U.S. Department of Agriculture operate so-called eddy covariance towers in areas such as the San Pedro River Riparian Area, the Santa Rita Mountains and the Catalina Mountains, which can measure temperature, moisture and gases at defined heights above ground.

“With the towers, we can measure carbon, water and energy flow across an entire ecosystem,” Barron-Gafford said.

In addition, his team has transplanted grasses and mesquite saplings into large, highly instrumented drums within Biosphere 2, where the researchers can put the plants through intentional periods of drought and temperature stress. Visitors to Biosphere 2 can see this science in action, right along the tour route, and learn more from members of the research team as they are doing the experiments.

“In the outside world, we actively monitor these leaf and ecosystem level responses to environmental stress, but to truly test the spectrum of responses, sometimes you need more control than nature affords you,” Barron-Gafford said.

He said that encroachment of woody plants onto former grasslands exposes the area’s semi-arid landscape to a higher risk of irreversible desertification.

“If a fire runs through and burns the thick grass cover that stabilizes the soil, you end up with areas consisting mostly of dirt with mesquite and creosote bushes. The big dust storms in certain parts of Arizona are visual proof how vulnerable that type of landscape is to erosion.”

Filling gaps in knowledge about what climate predictions mean for plants and animals in the region and making them accessible to land management officials is an important goal of Barron-Gafford’s research. “Our great historical knowledge is not enough given future climate change scenarios and we need biological data in addition to climate data to make accurate predictions.”