That’s how it feels when you start doing research (read: watch a few Youtube clips) for a story on Maria Bamford, the University of Minnesota alumna who has made her mark as a stand-up comedienne, a versatile voice-over actress, and, in recent years, as the hyper-intense Black Friday shopper in Target television commercials.

Bamford’s credits are lengthy, including multiple appearances on the late-night talk show circuit (“The Tonight Show,” “Late Night with Conan O’Brien,” “The Late Late Show with Craig Ferguson,” and “Jimmy Kimmel Live”), her own web series, and a number of comedy albums. She has guest starred on “The Sarah Silverman Program” on Comedy Central, and is the first female comic to have two half-hour “Comedy Central Presents” specials. 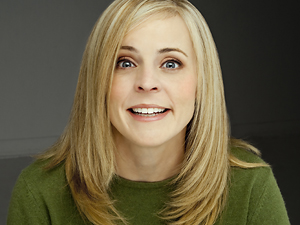 She changes voices on a dime, and has ready impersonations of, among many, her mother, her sister, an archenemy from high school, a generic female comic, and the syndicated radio host Delilah, who speaks in a soothing voice while dedicating love songs.

Best of all, Bamford is a delight to speak with—a Minnesotan-turned-Californian who’s unpretentious and reflective, but also adept at interrupting a spurt of introspection with a quick one-liner. She spoke by phone about her time at the U, her struggles with mental health, life in California, and an interesting career trajectory in a daunting profession.

Bamford spent most of her youth in Duluth, graduating from Marshall High School. Although Wikipedia claims she’s known “for her portrayal of her dysfunctional family,” any gripes there are doused in sarcasm, like the issue with her mother.

“I am so mad at her for raising me in an upper middle class household with plenty of (violin) lessons and a great education,” she says. “I’m so mad at her!”

She attended Bates College in Maine, then the University of Edinburgh for a year before finishing college at the U, where she received a degree in English (creative writing). She has fond memories of the writing faculty and one playwriting class in particular, where her output included “a thinly veiled autobiography in one act.”

Early on, she incorporated the violin in her act—“some sort of defense mechanism,” she says—and her first stand-up gig came at Stevie Ray’s Comedy Cabaret in Minnesota.

“It went well enough where I felt good,” says Bamford. “That’s the thing about Minnesota audiences—people don’t heckle, for the most part. And I think it’s less likely if I’m a girl.” She pauses. “And then the percentages go down ’cause I have a violin.”

And if ever she thinks she’s too brilliant, there’s the line from Golda Meir that her dad likes to use: “Don’t be so humble—you are not that great.” “Ohh, one-two punch,” Bamford laughs. “That seems like a Minnesota thing.”

Bamford didn’t set out to become an actress—she didn’t really like acting in college—but she’s enjoyed how her talent for voices has given her opportunities, including a number of comedic voiceovers for TV animations. She was a regular voice on Nickelodeon’s CatDog, and lent her voice to feature films “Stuart Little” and “Barnyard.” 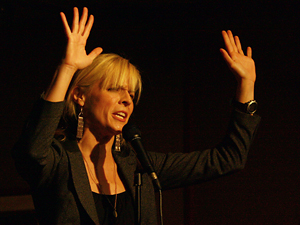 The Target commercials came about almost by accident, after she had auditioned for about 11 years without any success. “I realized, ‘Oh my gosh, I never booked anything,’” she says. “This is not working for me.”

Six months later, she received the offer from Target without even having to audition. “It was really a wonderful experience,” Bamford says. “It was fun because they would let me improvise.”

Via phone, it’s hard to imagine what expressions Bamford might be making as the conversation skips back and forth from the serious to the outrageous.

Her mental health struggles appeared for a time while she was at the U, she says, and she has high marks for an outpatient treatment program she went through while here.

“One of my passions is mental health,” she says. “I’m very interested in that subject for personal reasons, [and] I have continued to benefit from professionals and medications.”

Then suddenly we’re discussing a landmark experiment by the U’s Ancel Keys during World War II, and Bamford dispatches a one-liner for the ages, although it’s not meant for a general audience.

So, eventually it was back to Youtube for a couple more video bits (complete with facial expressions), all to try to take in the many voices, expressions, and moods of the U alum who, a couple decades ago, shaved her head and played her violin in Uptown for anyone who happened by and cared. Today, a good many fans care.

Browsing the feedback below a clip of a talk show appearance, one comment seemed to perfectly sum up Bamford’s myriad talents and the power she—and her chosen profession—holds.

Maria, it says, “is my favourite anti-depressant.”

The best medicine, indeed. And with no dosage warnings.