The Flowing Sands of Mars

Sand dunes on Mars move not unlike those on Earth, despite a much thinner atmosphere and weaker winds, as revealed by images taken with the UA-led HiRISE camera.

NASA’s Mars Reconnaissance Orbiter, or MRO, has revealed that movement in sand dune fields on the Red Planet occurs on a surprisingly large scale, about the same as in dune fields on Earth.

This is unexpected because Mars has a much thinner atmosphere than Earth is only about 1 percent as dense, and its high-speed winds are less frequent and weaker than Earth’s.

For years, researchers debated whether or not sand dunes observed on Mars were mostly fossil features related to past climate, rather than currently active. In the past two years, researchers using images from MRO’s High Resolution Imaging Science Experiment, or HiRISE, camera have detected and reported sand movement.

Now, scientists using images from the HiRISE camera, which is operated by the University of Arizona Lunar and Planetary Laboratory, have determined that entire dunes as thick as 200 feet are moving as integrated units across the Martian landscape. 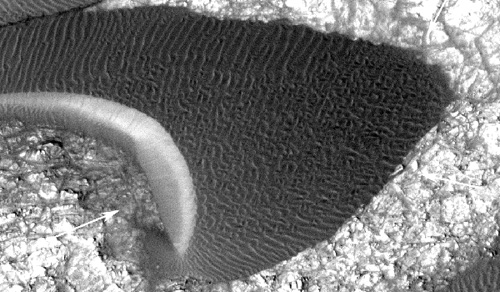 “This is the first study to quantify those sand fluxes,” said Sarah Mattson, a staff technician with the HiRISE team at the Lunar and Planetary Laboratory and a co-author of the paper, which is published in Nature’s advance online edition. “We now have a better idea of how much sand is moving and over how much time.”

The paper reports ripples of sand being displaced over the surface of dunes in the Nili Patera sand dune field, located near the Martian equator. The team was able to measure the lee front, which is the leading edge of the dune.

“We have seen sand being pushed down the steeper front of the dune by wind,” Mattson said.

To detect these subtle changes on the Martian terrain over time, the team analyzed high-resolution images of the Martian surface shot by the HiRISE camera with a new analytical software tool developed at the California Institute of Technology that allows researchers to measure changes in the position of sand ripples, in combination with a Digital Terrain Model, or DTM, developed at the UA.

“A HiRISE Digital Terrain Model is a topographical map of the Martian surface at a resolution of 1 meter per pixel and tens of centimeters for the vertical resolution,” said Mattson, who developed the digital terrain model for the Nili Patera dune field.

In other words, a DTM makes it possible to translate the two-dimensional views taken by HiRISE from its orbit into representations that reveal features like hills and valleys, gullies and craters – or dunes for that matter – with an accuracy that would make a decent anthill show up as a feature on the surface.

“The DTM is made from two images of the same location taken at different times and from different angles of view,” Mattson explained. “It allows us to co-register all images to the same location. After we make the digital terrain model, our colleagues at Caltech apply their software to correct for distortion. Combining those tools allows us to exactly measure what we see on the surface. It’s critical for the detection of changes.”

Analysis with Caltech’s new software tool revealed that sand ripples mover faster the higher up they are on a dune.

“We chose Nili Patera because we knew there was sand motion going on there, and we could quantify it,” said Nathan Bridges, a planetary scientist at Johns Hopkins University Applied Physics Lab who is the lead author of the paper. “The Nili dunes also are similar to dunes in places like Antarctica and to other locations on Mars.”

“The dry valleys of Antarctica are a great place to study geological processes that may apply to Mars because they are very cold and very dry,” Mattson added.

The study adds important information about the pace at which blowing sand could be actively eroding rocks on Mars. Using the new information about the volume of sand that is moving, scientists estimate rocks in Nili Patera would be worn away at about the same pace as rocks near sand dunes in Antarctica, where similar sand fluxes occur.

“Our new data shows that wind activity is indeed a major agent of evolution of the landscape on Mars,” said Jean-Philippe Avouac, Caltech team leader. “This is important because it tells us something about the current state of Mars and how the planet is working today, geologically.”

Scientists calculate that if someone stood in the Nili Patera dunes and measured out a 1-yard width, they would see more than 2 cubic yards of sand pass by in an Earth year, about as much as in a children’s sand box.

Scientists will use the information to understand broader mysteries on Mars, like why so much of the surface appears heavily eroded, how that occurred, and whether it is a current process or it happened in the past. Now, sand flux joins the arsenal of mechanisms capable of creating considerable erosion today on the Red Planet.