Virus Caught in the Act of Infecting a Cell

About the video: watch an animation showing the changes in the structure of a T7 virus as it infects an E. coli bacterium.

To infect a cell, a virus must be able to first find a suitable cell and then eject its genetic material into its host. This robot-like process has been observed in a virus called T7 and visualized by Ian Molineux, professor of biology in the College of Natural Sciences at The University of Texas at Austin, and his colleagues.

The researchers show that when searching for its prey, the virus briefly extends — like feelers — one or two of six ultra-thin fibers it normally keeps folded at the base of its head.

Once a suitable host has been located, the virus behaves a bit like a planetary rover, extending these fibers to walk randomly across the surface of the cell and find an optimal site for infection.

At the preferred infection site, the virus goes through a major change in structure in which it ejects some of its proteins through the bacterium’s cell membrane, creating a path for the virus’s genetic material to enter the host.

After the viral DNA has been ejected, the protein path collapses and the infected cell membrane reseals.

The top images are tomograms of the virus in action. The illustrations show T7 using its fibers to “walk” across the cell surface and infect the cell. Image Credit: Hu et. al. 2013, Science Express. (Image via Eurekalert)

“Although many of these details are specific to T7,” said Molineux, “the overall process completely changes our understanding of how a virus infects a cell.”

For example, the researchers now know that most of the fibers are usually bound to the virus head rather than extended, as was previously thought. That those fibers are in a dynamic equilibrium between bound and extended states is also new. 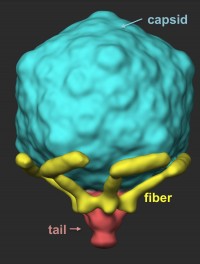 Researchers found that the T7 virus has six tail fibers that are folded back against its capsid. The fibers extend as the virus locates a suitable host and as it “walks” across its host cell surface to find a site to infect. Image credit: Hu et. al. 2013. Science Express.

Molineux said that the idea that phages “walk” over the cell surface was previously proposed, but their paper provides the first experimental evidence that this is the case.

This is also the first time that scientists have made actual images showing how the virus’s tail extends into the host — the very action that allows it to infect a cell with its DNA.

“I first hypothesized that T7 made an extended tail more than 10 years ago,” said Molineux, “but this is the first irrefutable experimental evidence for the idea and provides the first images of what it looks like.”