Vaccine for Urinary Tract Infections is One Step Closer

*Study sheds light on what E. coli genes are doing inside the body during infection* 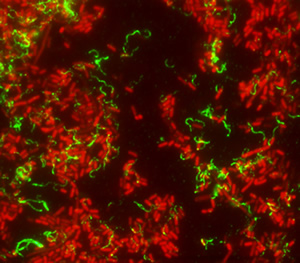 ANN ARBOR, Mich. — Urinary tract infections are a painful, recurring problem for millions of women. They are also getting more dangerous as bacteria develop resistance to the most common treatments.

Scientists from the University of Michigan have moved one step closer to a vaccine that could prevent a majority of urinary tract infections, which are caused by E. coli bacteria. Using a genetic technique rarely used to look at infections in human hosts, the researchers studied how the E. coli bacteria operate and discovered key differences between how the bacteria’s genes behave in women and how they behave in mice used in experiments.

Their findings, published online Nov. 11 in PLoS Pathogens, could lead to developments that would save billions in health care costs and millions of doctors’ visits and hospitalizations from urinary tract infections each year.

“If we want to prevent infections in humans, we need to look at what’s going on with the bacteria while it’s in humans,” says Harry L.T. Mobley, Ph.D., the study’s senior investigator and the Frederick G. Novy Professor and chair of the U-M Department of Microbiology and Immunology. “We’re not looking to make the world safer for mice.”

Mobley’s team found that specific surface structures of the E. coli found in mouse infections, which scientists consider a key to how the bugs thrive, were not prevalent in the human samples.

“That tells us it’s more complicated than we thought and that there are some important differences we need to study in human infections,” says research fellow Erin C. Hagan, one of the study’s two first authors.

Last year, Mobley’s team published a study that showed a vaccine they had developed prevented infection and produced key types of immunity in mice.

Even though researchers found differences in gene expression in the mouse and human samples, key targets of the vaccine related to iron acquisition were found in both samples, raising hopes that the vaccine would work in humans. Still, he cautions, developing and testing a vaccine for humans is several years away.

The latest research also provided an opportunity for basic science researchers and clinicians at U-M to work together. 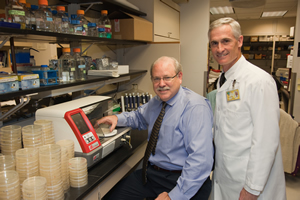 In this case, microbiologists turned to

Gary J. Faerber, M.D., a professor of urology at the University of Michigan Medical School and co-director of the Kidney Stone/Lithotriptor Program and the Michigan Center for Minimally Invasive Urology, whose clinic provided the needed samples, which must be collected quickly and carefully to preserve the bacteria.

Urinary tract infections are an increasing concern for Faerber, who says he’s seen the number of infections that are resistant to common antibiotic treatments rapidly increase in recent years.

“That resistance is just going to keep going up,” Faerber says. He described a recent, older patient whose infection would only respond to a single antibiotic costing $500 per dose and which has to be administered intravenously.

Antibiotic resistance is becoming an issue with not only limiting antibiotic choices but also cost of treatment with newer generation antibiotics, Faerber says.