AMHERST, Mass. – Launching a natural research experiment in Kathmandu, Nepal, this month using advanced monitoring methods to assess health risk from air pollution, environmental health scientist Rick Peltier at the University of Massachusetts Amherst hopes to demonstrate for the first time in a real-world setting that air pollution can and should be regulated based on toxicology variables rather than simply on the volume of particles in the air.

Recent technological advances in air quality measurement methods now make it possible and practical to monitor air pollution in a much more sophisticated way than before, Peltier says. Researchers now use X-ray fluorescence spectrometry to measure air pollution metal content, ion chromatography to identify other chemicals and other tactics to assess organic and elemental carbon levels. 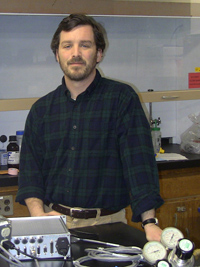 Peltier says, “We’re interested in how air pollution directly affects health. The current regulatory method doesn’t take into account the relative toxicity of components, that is the specific chemical makeup of the air we breathe. There has been a void in the science in this field. But with this experiment, for the first time we’ll have biological measurements coupled with high-quality air pollution measurements in a cohort of traffic police exposed to extreme levels of pollution.”

At present, the Environmental Protection Agency monitors air quality components every three days at 350 stations across the United States, but there are no such sites in Nepal. Particulates are an important signature of traffic. A poor air quality day in Los Angeles may see 40-50 micrograms of particulates per cubic meter, Peltier says, while in Kathmandu the level can be 800-900, or about 20 times worse.

Ethically, the environmental scientist adds, it would be impossible to expose people to such pollution levels in a laboratory-based experiment, and ambient levels such as those typically observed in Kathmandu are never routinely encountered anywhere in the United States. Peltier and colleagues’ study will take advantage of the fact that the traffic officers already are exposed to high air pollution levels in their normal workday.

Funded by a multinational partnership led by UMass Amherst and including the Himalayan region’s Intergovernmental Centre for Integrated Mountain Development (ICIMOD) and the Institute for Advanced Sustainability Studies in Potsdam, Germany, the investigation will follow a cohort of 32 traffic control officers in Kathmandu during two seasons: Cold, dry winter from this month into March, with a second study in the hot, rainy monsoon season from June to August, when air pollution levels are lower.

“Unfortunately, the Kathmandu metropolitan area has quite poor air quality, and it’s in a valley so it is a persistent problem,” he adds. “We hypothesize that toxicity is related to the chemical components of pollution. We know this is true in a Petri dish, but now we’ll be able to measure it in study subjects.”

Participants are 16 men and 16 women, 25 to 35 years old who have similar education and income levels. For a six-day work week, each will carry a small waist pack containing research-grade, solar-powered portable air samplers. The filters will be collected for airborne metals, ions, organic carbon and black carbon analysis. The experiment will include an intervention component, as well: For half of each study week, participants will wear high-quality, particle-filtering face masks that greatly reduce air pollution exposure.

In addition to the air filters, researchers will collect blood samples and ask the traffic officers to use a spirometer several times a day to assess lung function. Their location, activity and electrocardiogram will be continuously measured in both conditions: Breathing polluted air with and without protective face masks.

Air quality samples and the health measurement data will be analyzed at UMass Amherst and compared between the different exposure conditions. Peltier and his postdoctoral fellow Kabindra Shakya will collaborate with researcher Arnico Panday of ICIMOD, Kathmandu, colleagues at the Nepal Health Research Council and Maheswar Rupakheti of the sustainability institute in Potsdam.