Unusual Supernova is Doubly Unusual for Being Perfectly Normal

From the “Backyard Supernova,” the Berkeley Lab-led Nearby Supernova Factory has built a benchmark atlas for normal Type Ia’s

August, 2011, saw the dazzling appearance of the closest and brightest Type Ia supernova since Type Ia’s were established as “standard candles” for measuring the expansion of the universe. The brilliant visitor, labeled SN 2011fe, was caught by the Palomar Transient Factory less than 12 hours after it exploded in the Pinwheel Galaxy in the Big Dipper.

Easy to see through binoculars, 2011fe was soon dubbed the Backyard Supernova. Major astronomical studies from the ground and from space followed close on its heels, recording its luminosity and colors as it rapidly brightened and then slowly faded away.

The international Nearby Supernova Factory (SNfactory), led by Greg Aldering of the U.S. Department of Energy’s Lawrence Berkeley National Laboratory (Berkeley Lab), has now released a unique dataset based on 32 nights of repeated observations of 2011fe with the SuperNova Integral Field Spectrograph (SNIFS), built by the SNfactory’s partners in Lyon and Paris, France, and mounted on the University of Hawaii’s 2.2-meter telescope on Mauna Kea. The observations began two weeks before the supernova reached its peak brightness and continued for over three months after maximum light had passed.

SNfactory member Rui Pereira of the Institut de Physique Nucléaire de Lyon says that the collected data “will be the benchmark atlas for all future studies of Type Ia’s.” Pereira is the lead author of the article presenting the observations in the journal Astronomy & Astrophysics. 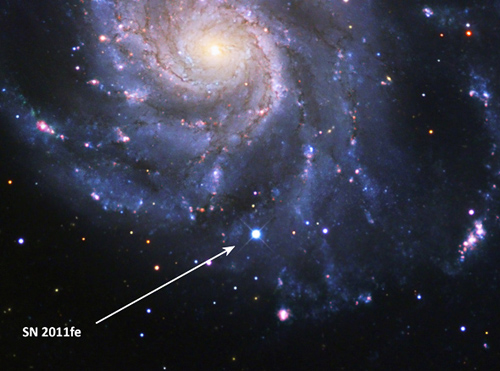 Supernova 2011fe was discovered just hours after it exploded in the Big Dipper. Studies by the Nearby Supernova Factory of its spectrum as it evolved over time have produced a benchmark atlas of data by which to measure all future Type Ia’s. (Image credit: B. J. Fulton, Las Cumbres Observatory Global Telescope Network.)

Why a perfectly normal supernova is so odd

Type Ia supernovae aren’t so much standard candles as “standardizable” ones. Graphs of how their brightness and spectral features change over time – their light curves – vary, but because timing and brightness are related, the light curves can be stretched (or squeezed) to match the standard. SN 2011fe’s light curve falls right in the peak of the distribution – as astrophysicists say, it has “stretch 1.”

2011fe not only looks like a textbook case, it passes important tests. Its brightness at different times (epochs) could be accurately recorded because the distance to its home galaxy had been measured independently, and there was little or no dust in the line of sight to affect color or brightness.

Normal as it is, however, 2011fe’s light curve doesn’t match the leading computational models, none of which fit the SNfactory data. Given the unavoidable uncertainties of supernova observation, says Aldering, “to date it has been a little too easy to cobble data together, depending on what you think it should be.” The SNfactory’s benchmark atlas raises the bar. “From now on researchers won’t be able to arbitrarily tweak knobs in their models.”

The 2011fe gold-standard atlas will help answer many longstanding questions about Type Ia supernovae, including the progenitors of these titanic thermonuclear explosions and the mechanisms of the explosions themselves.

The single degenerate model of Type Ia progenitors posits a single white dwarf that steals extra mass from a large companion star. (Electron “degeneracy” is a result of tight packing of atoms in a white dwarf.) In the resulting supernova explosion there should be signs of interaction with the companion, or what’s left of it. In the double degenerate model, two white dwarfs collide. The resulting supernova would show no signs of interaction with a companion.

The 2011fe data also point to unburned carbon as characteristic of the spectrum of a normal Type Ia. The finding adds support for a particular model, “pure turbulent deflagration,” compared to two-stage explosions that would eliminate most excess carbon.

Carbon surviving from the original white dwarf indicates that different supernovae burn material with a range of different efficiencies when they explode. Methods for detecting unburned carbon, which may often have been missed in the past, are suggested by the 2011fe data.

In sum, says Aldering, “The SN 2011fe atlas offers unprecedented detail and a solid point of reference for Type Ia physics. We’ve never had data like this. It’s a dream opportunity to stimulate deeper thinking about these markers of the expansion of the universe.”

This work was supported by DOE’s Office of Science; the Gordon and Betty Moore Foundation; the French National Center for Scientific Research (CNRS) National Institute of Nuclear and Particle Physics (IN2P3) and National Institute for Earth Sciences and Astronomy (INSU); the French National Program of Cosmology and Galaxies (PNCG); and the Transregional Research Center, “The Dark Universe” (TRR33), of the German Research Foundation (DFG).