In the United States, rivers and their floodplains are well-documented and monitored. Ecuador’s largest river, however, remains largely mysterious.

The Napo River is about 670 miles long. It winds through the western Amazon basin in Ecuador and Peru, one of the most remote and biodiverse regions in the world, and provides access to valuable oil reserves.

“Local residents have long used the river for their livelihoods and transportation, and recently there’s been an increase in traffic from oil companies that are exploring and drilling in the region,” said Jorge Celi, a zoology doctoral student at MSU’s Kellogg Biological Station. “We are interested in gaining a better understanding of the ecohydrology of the river and its floodplains to assess the river’s overall impact on the region.” 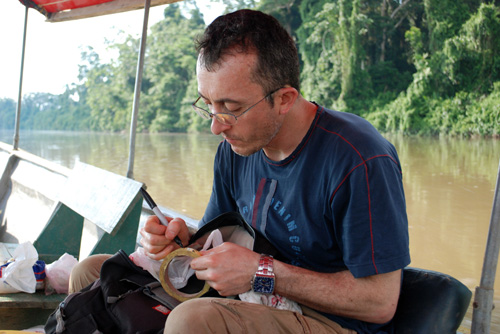 Celi has been studying the Napo River region since 2007. The relationship of river and floodplain affects the kinds and diversity of plant communities and the feeding and migration of fish, reptiles and aquatic mammals, such as pink freshwater dolphins. Local indigenous communities depend on the river-floodplain system for ecosystem services such as the harvest of fish, wildlife and native plants for food as well as small-scale agriculture. Ecotourism also has become increasingly important.

Proposals to improve the navigability and control flooding of the Napo River have been considered by Ecuadorian officials who seek to make the river a commercial barge waterway. One of the research team’s goals is to document the river in its “wild” state before major engineering work is conducted, Celi said.

“We know much about the Amazon River, but we know very little about the Napo River, such as when it floods or the depth and reach of its floodwaters,” he said. “Our research will help guide economic development to the benefit of Ecuador and the local residents, while promoting conservation of the region.”

The field research has been arduous. Teammates were shuttled up and down the river via motorized canoes. They trudged through swampy rainforests, constantly sweating in the hot and humid conditions, and being pestered by mosquitoes and (occasionally) bees. They also had to remain alert for poisonous snakes, spiders, piranhas and electric eels while attempting to locate hidden monitors ­– many beneath murky floodwaters.

“On our last trip, we had to dive under the water to retrieve some of our equipment,” Celi said. “Our guide was amazing. Without any markers, he always found the exact tree in this immense jungle under which we’d find our monitors.”

Along with support from accomplished local guides, Celi’s team received aerial assistance from NASA. As part of a month-long expedition, NASA mapped a number of Central and South American rivers and wetlands using new radar technology to penetrate dense jungle canopies and detect flooding beneath. The partnership is producing detailed maps of the Napo floodplains.

Armed with this information, decision-makers can view development projects in the context of long-term social and ecological sustainability, Celi said.

Celi’s research has been supported by NASA, the National Science Foundation, National Geographic Society and the World Wildlife Fund.