The water as a source of small ions for the surface of colloidal lead sulfide (PbS) nanoparticles allowed the team to explain just how the surface of these important particles are passivated, meaning how they achieve an overall balance of positive and negative ions. This has been a big question for some fifteen years, and the answer washes up in hydroxyl groups from water that had been thought not to be there.

“Passivation is required mostly in colloidal solutions, which is the cheap way to produce nanoparticles. Imagine the surface of the nanostructure: there are ligands, also called surfactants, binding to the surface,” explains Zherebetskyy. “The surfactants define a lot of the chemical and physical properties of the nanoparticles.”

“We can synthesize a very beautiful nanostructure, and know how to control even the shape. But how to control the shape is related to how you passivate a surface during the growth process, and exactly how ligands passivate the surface [and how electronic structures happen] has never been well understood,” adds Lin-Wang Wang, senior staff scientist at Berkeley Lab and leader of Berkeley Lab’s Computational Material Science and Nano Science Group. 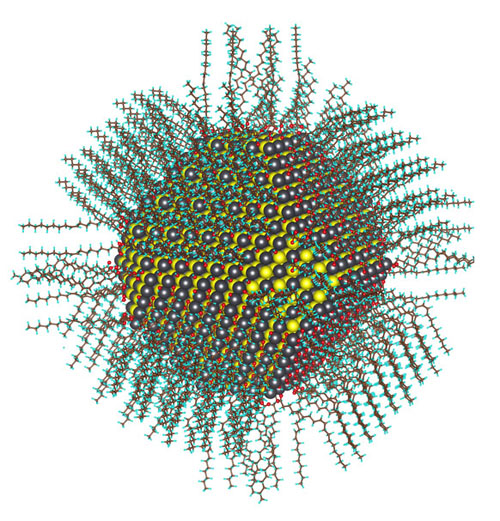 The first step in making a PbS nanocrystal is to dissolve lead oxide in hot oleic acid. This forms one of the precursor molecules, which is lead plus long oleate ligands, and a byproduct of water.  “You heat the precursors [to dry them], so people thought that all the water had been evaporated,” explains Wang.

In the multistep process for building up the (111) facets of PbS nanocrystals: A) lead-oleate and water precursors approach nonpolar and stoichiometric facets; B) Pb ions bind to surface; C) one of two oleates in each precursor complex is removed and water dissociates to provide a hydroxyl group to surface; and D)desorbed OAH molecules dimerize in solvent. Image courtesy of Wang group, Berkeley Lab (Click image to enlarge)

“People were really puzzled about how the surface can be passivated,” he continues.  The nanocrystals have an excess of lead ions relative to sulfate, which means that a surfactant of 2- charge is needed to passivate each extra 2+ lead ion. Each oleic acid molecule (oleate) has charge 1-, but experiments show that the number of extra lead atoms is roughly equal to the number of oleates. Thus it does not make sense that the precursor behaves as though it is passivated.

But doing calculations and following the synthesis processes suggested to Zherebetskyy and Wang that there might still be water in the precursor molecules: indeed, a series of spectroscopic experiments showed that the water binds strongly to the precursors and serves as a source of hydroxyl groups, charge 1-, that can also allow passivation.

“Oleates are big. Imagine them like a tube,” explains Zherebetskyy. “The radius of this tube is too large to form such a dense packing that completely passivates the lead atoms.” That is, they are too big to cram around the lead without interfering with each other. His research was an effort to find what ‘something else’ was needed to fully passivate the nanocrystal.

When the team found that water binds strongly to the precursor lead oleate, to the point that less than half of it is removed during the synthesis and dehydration process, they had uncovered the source of small hydroxyl groups that bind to the lead between oleates.

These findings have been reported in a Science paper titled “Hydroxylation of the Surface of PbS Nanocrystals Passivated with Oleic Acid.” Wang is the corresponding author and Zherebetskyy is the lead. Other authors are Marcus Scheele, Yingjie Zhang, Noah Bronstein, Christopher Thompson, David Britt, Miquel Salmeron and Paul Alivisatos. 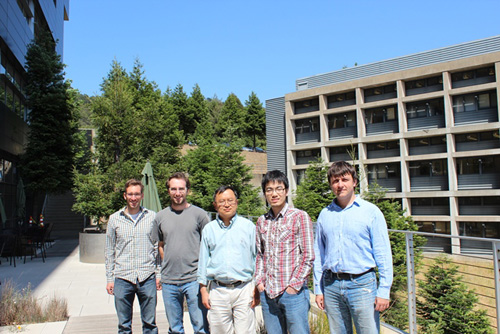 The spectrum of spectroscopy techniques

“It is very difficult to detect hydroxyl because water is everywhere; hydroxyl spectroscopic peaks can be confused with those from water, and your sample might not be pure,” says Wang. “We used all the spectroscopy techniques.”

Noah Bronstein saw a very interesting feature during routine transmission electron microscope (TEM) observations during particle synthesis: only the lead-rich facets of the PbS molecule were covered by oleates. This was the first observation to suggest that Zherebetskyy and Wang’s theory was right: “They had predicted the binding energy of the ligand onto the lead-rich facet should be much higher,” says Bronstein.

The other facet of the nanocrystal, with both lead and sulfur exposed, was bare of ligands. “Once we saw that, we tried other things to look for water in the lead precursor; or hydroxyl on the nanoparticle surface,” adds Bronstein. He used infrared spectroscopy to verify the presence of water on precursor lead-oleates, and nuclear magnetic resonance to show that the lead oleate acted as a drying agent, grabbing water out of the solvent. During synthesis, hydroxyl groups from the water stayed tightly bound to the lead oleate.

“But X-ray photoemission spectroscopy (XPS) was really the golden bullet that showed the presence of hydroxyl,” says Bronstein.

Yingjie Zhang ran XPS experiments to provide direct proof that hydroxyl groups remain bonded to the surface. “You need several control samples – a PbS nanocrystal with lead oxide precursor and another precursor that does not involve water during synthesis,” he says. To achieve this, he used a nanocrystal sample produced from lead chloride instead of lead oxide, such that there was no way for water to be generated in the reaction with oleic acid. In the end, he observed an oxygen emission peak from one nanocrystal and a chlorine peak from the other, proving that there is indeed hydroxyl on the PbS surface synthesized from lead oxide precursors.

“Since nanoparticles started to be implemented in the first prototype devices, people have asked what’s going on at the surface and how we can adjust properties by changing the organic molecules on the surface,” says Zherebetskyy.

And it’s not just PbS – many other nanoparticles are synthesized similarly using oleic acid or other big ligands.  Knowing how nanoparticles are passivated provides the opportunity to consider ways of engineering surface structures in order to fine-tune their electrical properties for a range of applications.