“The more I focus on my thoughts, the more I feel like they don’t belong to me” — that is how Anna, an individual with psychosis, describes her experience.

This disruption in a person’s sense of self has long fascinated Rachel Aviv, staff writer for The New Yorker, she said in a recent campus talk sponsored by the Poynter Fellowship in Journalism.

In her talk at the Connecticut Mental Health Center, Aviv described how she began writing about individuals who have experienced psychosis, giving voice to their struggles and shedding light on issues within the psychiatric and legal systems.”

Aviv told her audience that she is particularly interested in how a person progresses from sanity to psychosis and what they experience during this progression.

In the early stages of her psychosis, for example, Anna began to believe that everything was made of paper. “When does a strong idea become pathological?” asked Aviv. “At what point does our interpretation of the world become so fixed that it can be called a delusion?”

Aviv became interested in schizophrenia thanks to Louis Sass, a clinical psychologist at Rutgers University, who encouraged the journalist to pursue this topic through research and writing. 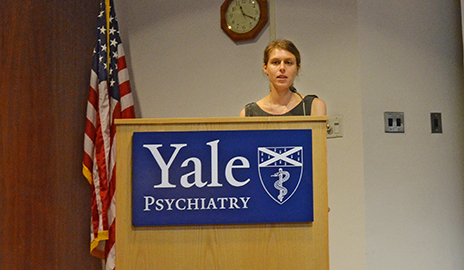 In her pursuit, Aviv began visiting clinics and speaking with patients believed to be at risk for developing psychosis in the next one to three years. These individuals have mild delusions, but still demonstrate insight into their illness. Aviv said some of the patients she interviews actually question whether their perceptions are real or delusional.

It is difficult for people like Anna and others with psychosis to communicate what is happening to them, the journalist noted. Aviv attributed this to a lack of “common language” to adequately depict psychotic experiences.

Aviv pointed out, “we can create checklists of clearly defined symptoms, but it’s much harder to describe and convey what it feels like to lose one’s mind and let go of one’s grasp of reality.” This challenge, she added, makes the experience of psychosis particularly alienating for those who are facing it.

Just as individuals find it hard to communicate, providers often find it hard to connect with psychotic patients, according to Aviv, who noted that Freud was credited with saying he was unable to feel empathy for schizophrenics and found them to be irritating — a sentiment that Aviv suggested may be all too common.

According to Aviv, Anna was fortunate in that she connected with her therapist. Even with consistent therapy, however, she found it difficult to accept reality.

Aviv quoted Anna as saying, “There’s a sense in which the law of contradiction — that something can’t be X and not X at the same time — has ceased to matter. What I know and what I believe no longer coincide, and I can’t make them.”

She explained how Anna reflected on this time as “creeping into insanity with pained self-awareness,” rather than as a particular moment in which she broke from reality.

During her talk, Aviv read two of her magazine articles describing the experiences of individuals with psychosis.

After seeing Aviv’s article about Anna, a formerly homeless schizophrenic reader wrote to thank Aviv for capturing Anna’s story. He told her how during his own psychotic episodes, mundane tasks were “loaded with meaning” and that, like Anna, he at times felt complicit in the delusions, as if he wanted them to be true. He said people who have been through madness sometimes feel as if their lives had more significance during psychosis than at any other point.

Because she thought they would benefit from a shared understanding of one another’s experiences, Aviv introduced the reader and Anna. The two forged a deep bond — an outcome that, Aviv said, was a highlight of her career.

Aviv also described how her research on psychosis led her to the Preventable Tragedies Database, where — among other stories — she came across the account of Linda Bishop, who died alone in an abandoned farmhouse after being released from a psychiatric hospital without notification to her family.

Aviv said Bishop felt alienated by her doctors’ use of clinical terminology in their attempts to educate her about her mental illness. The patient refused to acknowledge words such as “manic” and “bipolar,” which she thought were emotional states better characterized as ”pissed off,” “energetic,” and “unhappy.”

A patient has the right to refuse psychiatric care, said Aviv, alluding to the delicate balance between patients’ rights and their safety.  Aviv noted that it is difficult to determine when medical interventions against the will of patients should be made.

She told the audience that the medical and legal communities have varying opinions of what it means for a person to be in the “least restrictive environment.” Linda Bishop was exhilarated by the freedom of living in a place of her own with no one telling her what to do, said Aviv; her family members, however, lament that their mentally ill relative was discharged without a plan, which, they believe, led to her untimely death.