Scientists at the Florida Museum of Natural History on the UF campus examined the internal anatomy of the 164.5-pound snake Friday. The animal was brought to the Florida Museum from Everglades National Park as part of a long-term project with the U.S. Department of the Interior to research methods for managing the state’s invasive Burmese python problem. Following scientific investigation, the snake will be mounted for exhibition at the museum for about five years, and then returned for exhibition at Everglades National Park.

“This thing is monstrous, it’s about a foot wide,” said Florida Museum herpetology collection manager Kenneth Krysko. “It means these snakes are surviving a long time in the wild, there’s nothing stopping them and the native wildlife are in trouble.”

Krysko said the snake was in excellent health and its stomach contained feathers that will be identified by museum ornithologists. Burmese pythons are known to prey on native birds, deer, bobcats, alligators and other large animals.

“A 17.5-foot snake could eat anything it wants,” Krysko said. “By learning what this animal has been eating and its reproductive status, it will hopefully give us insight into how to potentially manage other wild Burmese pythons in the future. It also highlights the actual problem, which is invasive species.” 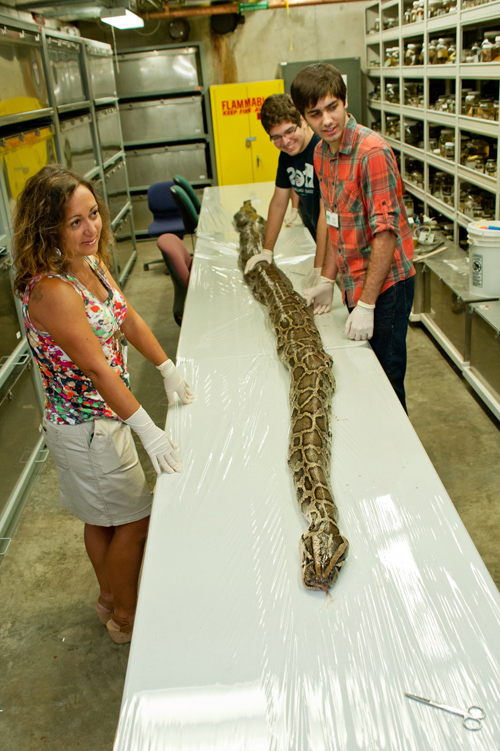 GAINESVILLE, Fla. — Researchers at the Florida Museum of Natural History on the University of Florida campus prepare to examine the internal anatomy of a 17-foot-7-inch Burmese python, the largest found in Florida to date, on Aug. 10, 2012. The more than 164-pound snake carried a state record 87 eggs in its oviducts. The Burmese python is native to Southeast Asia and has been established and reproducing as an invasive species in Florida since 2000. Pictured are Claudia Grant (from left), Leroy Nunez and Nicholas Coutu. (University of Florida photo by Kristen Grace/Florida Museum of Natural History)

Native to Southeast Asia and first found in the Everglades in 1979, the Burmese python is one of the deadliest and most competitive predators in South Florida. With no known natural predator, population estimates for the python range from the thousands to hundreds of thousands. They were determined to be an established species in 2000 and are a significant concern, Krysko said.

“They were here 25 years ago, but in very low numbers and it was difficult to find one because of their cryptic behavior,” Krysko said. “Now, you can go out to the Everglades nearly any day of the week and find a Burmese python. We’ve found 14 in a single day.”

The rapid population growth led to recent state laws prohibiting people from owning Burmese pythons as pets or transporting the snakes across state lines without a federal permit. Florida residents also may hunt pythons in certain wildlife management areas during established seasons with a hunting license and required permits. 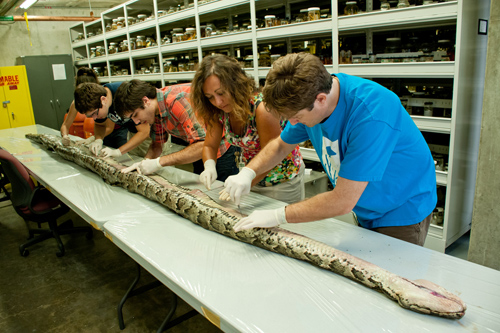 GAINESVILLE, Fla. — On Aug. 10, 2012, researchers at the Florida Museum of Natural History on the University of Florida campus examine the internal anatomy of the largest Burmese python found in Florida to date. The 17-foot-7-inch snake weighed 164 pounds and carried 87 eggs in its oviducts, a state record. Following scientific investigation, the snake will be mounted for exhibition at the museum for about five years, and then returned for exhibition at Everglades National Park. Pictured are Rebecca Reichart (from left), Leroy Nunez, Nicholas Coutu, Claudia Grant and Kenneth Krysko. (University of Florida photo by Kristen Grace/Florida Museum of Natural History)

Everglades National Park and the Florida Fish and Wildlife Conservation Commission are partnering with other agencies to address the increasing populations.

Skip Snow, a park wildlife biologist, said research of the snake’s biology is important for understanding how to curtail the future spread of invasive species.

“I think one of the important facts about this animal is its reproductive capability,” Snow said. “There are not many records of how many eggs a large female snake carries in the wild. This shows they’re a really reproductive animal, which aids in their invasiveness.”

Non-native species are considered invasive if they have a negative impact on native species or habitat, cause economic damage or pose a threat to human health and safety. Exotic snakes found in Florida are often the result of pet owners accidentally or intentionally releasing the animals. Citizens may dial 1-888-IVE-GOT1 begin_of_the_skype_highlighting 1-888-IVE-GOT1 end_of_the_skype_highlighting to receive removal assistance by trained handlers.

Previous records for Burmese pythons captured in the wild were 16.8 feet long and 85 eggs. 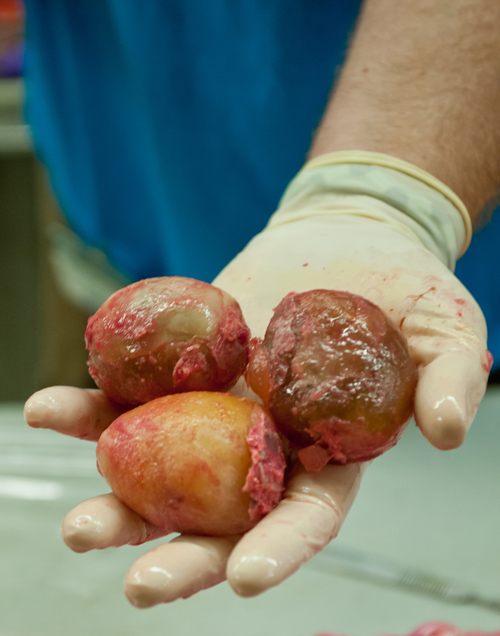 GAINESVILLE, Fla. — On Aug. 10, 2012, University of Florida herpetologist Kenneth Krysko displays eggs found in the largest Burmese python from Florida to date. Florida Museum of Natural History researchers examined the internal anatomy of the 17-foot-7-inch snake Friday and found a state record 87 eggs in the python’s oviducts. An invasive species and one of the deadliest and most competitive predators in South Florida, the Burmese python was first found in the Everglades in 1979. (University of Florida photo by Kristen Grace/Florida Museum of Natural History)

“I’m really happy to be part of this team of researchers working on the Burmese python problem in Florida, and have been for a number of years,” Krysko said. “But when I’m able to conduct this type of research here at the university, I’m able to teach new students and new researchers about python anatomy and discuss the problem with invasive species. We need all the help we can get, we really do.”

Florida has the world’s worst invasive reptile and amphibian problem. Krysko led a 20-year study published in September 2011 in Zootaxa showing 137 non-native species were introduced to Florida between 1863 and 2010. The study verified the pet trade as the No. 1 cause of the species’ introductions and the Burmese python was one of 56 non-native species determined to be reproducing and established in the state.