A long-time staple of science fiction is the tractor beam, a technology in which light is used to move massive objects – recall the tractor beam in the movie Star Wars that captured the Millennium Falcon and pulled it into the Death Star. While tractor beams of this sort remain science fiction, beams of light today are being used to mechanically manipulate atoms or tiny glass beads, with rapid progress being made to control increasingly larger objects. Those who see major roles for optomechanical systems in a host of future technologies will take heart in the latest results from a first-of-its-kind experiment.

Scientists with the U.S. Department of Energy’s Lawrence Berkeley National Laboratory (Berkeley Lab) and the University of California (UC) Berkeley, using a unique optical trapping system that provides ensembles of ultracold atoms, have recorded the first direct observations of distinctly quantum optical effects – amplification and squeezing – in an optomechanical system. Their findings point the way toward low-power quantum optical devices and enhanced detection of gravitational waves among other possibilities.

“We’ve shown for the first time that the quantum fluctuations in a light field are responsible for driving the motions of objects much larger than an electron and could in principle drive the motion of really large objects,” says Daniel Brooks, a scientist with Berkeley Lab’s Materials Sciences Division and UC Berkeley’s Physics Department. 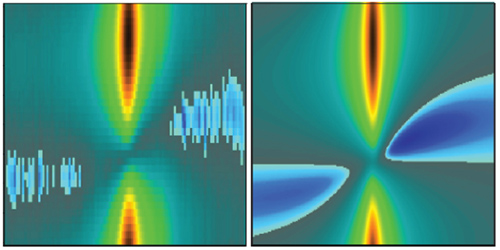 Berkeley Lab researchers directly observed quantum optical effects - amplification and ponderomotive squeezing - in an optomechanical system. Here the yellow/red regions show amplification, the blue regions show squeezing. On the left is the data, on the right is the theoretical prediction in the absence of noise. (Photo courtesy of Stamper-Kurn group)

Brooks, a member of Dan Stamper-Kurn’s research group, is the corresponding author of a paper in the journal Nature describing this research. The paper is titled “Nonclassical light generated by quantum-noise-driven cavity optomechanics.” Co-authors were Thierry Botter, Sydney Schreppler, Thomas Purdy, Nathan Brahms and Stamper-Kurn.

Light will build-up inside of an optical cavity at specific resonant frequencies, similar to how a held-down guitar string only vibrates to produce specific tones. Positioning a mechanical resonator inside the cavity changes the resonance frequency for light passing through, much as sliding one’s fingers up and down a guitar string changes its vibrational tones. Meanwhile, as light passes through the optical cavity, it acts like a tiny tractor beam, pushing and pulling on the mechanical resonator.

If an optical cavity is of ultrahigh quality and the mechanical resonator element within is atomic-sized and chilled to nearly absolute zero, the resulting cavity optomechanical system can be used to detect even the slightest mechanical motion. Likewise, even the tiniest fluctuations in the light/vacuum can cause the atoms to wiggle. Changes to the light can provide control over that atomic motion. This not only opens the door to fundamental studies of quantum mechanics that could tell us more about the “classical” world we humans inhabit, but also to quantum information processing, ultrasensitive force sensors, and other technologies that might seem like science fiction today.

“There have been proposals to use optomechanical devices as transducers, for example coupling motion to both microwaves and optical frequency light, where one could convert photons from one frequency range to the other,” Brooks says. “There have also been proposals for slowing or storing light in the mechanical degrees of freedom, the equivalent of electromagnetically induced transparency or EIT, where a photon is stored within the internal degrees of freedom.”

Already cavity optomechanics has led to applications such as the cooling of objects to their motional ground state, and detections of force and motion on the attometer scale. However, in studying interactions between light and mechanical motion, it has been a major challenge to distinguish those effects that are distinctly quantum from those that are classical – a distinction critical to the future exploitation of optomechanics. 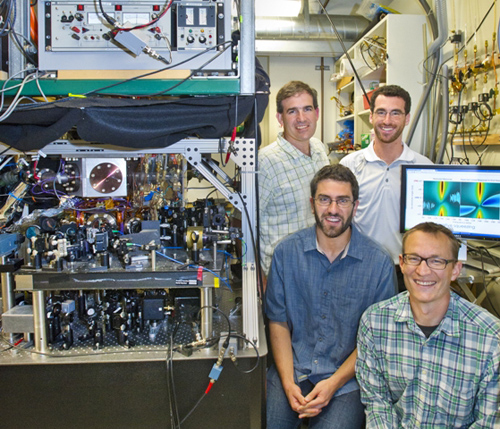 Brooks, Stamper-Kurn and their colleagues were able to meet the challenge with their microfabricated atom-chip system which provides a magnetic trap for capturing a gas made up of thousands of ultracold atoms. This ensemble of ultracold atoms is then transferred into an optical cavity (Fabry-Pferot) where it is trapped in a one-dimensional optical lattice formed by near-infrared (850 nanometer wavelength) light that resonates with the cavity. A second beam of light is used for the pump/probe.

“Integrating trapped ensembles of ultracold atoms and high-finesse cavities with an atom chip allowed us to study and control the classical and quantum interactions between photons and the internal/external degrees of freedom of the atom ensemble,” Brooks says. “In contrast to typical solid-state mechanical systems, our optically levitated ensemble of ultracold atoms is isolated from its environment, causing its motion to be driven predominantly by quantum radiation-pressure fluctuations.” 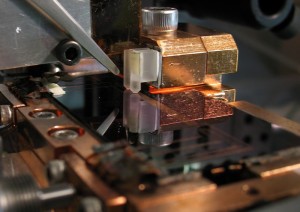 Dan Stamper-Kurn’s research group has developed a microfabricated atom-chip system which provides a magnetic trap for capturing a gas made up of thousands of ultracold atoms. (Photo courtesy of Stamper-Kurn group)

The Berkeley research team first applied classical light modulation to a low-powered pump/probe beam (36 picoWatts) entering their optical cavity to demonstrate that their system behaves as a high-gain parametric optomechanical amplifier. They then extinguished the classical drive and mapped the response to the fluctuations of the vacuum. This enabled them to observe light being squeezed by its interaction with the vibrating ensemble and the atomic motion driven by the light’s quantum fluctuations. Amplification and this squeezing interaction, which is called “ponderomotive force,” have been long-sought goals of optomechanics research.

“Parametric amplification typically requires a lot of power in the optical pump but the small mass of our ensemble required very few photons to turn the interactions on/off,” Brooks says. “The ponderomotive squeezing we saw, while narrow in frequency, was a natural consequence of having radiation-pressure shot noise dominate in our system.”

“Currently, squeezing light over a wide range of frequencies is desirable as scientists search for the first detection of a gravitational wave,” Brooks explains. “Ponderomotive squeezing, should be valuable later when specific signals want to be studied in detail by improving the signal-to-noise ratio in the specific frequency range of interest.”

The results of this study differ significantly from standard linear model predictions. This suggests that a nonlinear optomechanical theory is required to account for the Berkeley team’s observations that optomechanical interactions generate non-classical light. Stamper-Kern’s research group is now considering further experiments involving two ensembles of ultracold atoms inside the optical cavity.

This research was funded by the Air Force Office of Scientific Research and the National Science Foundation.