UCLA’s undergraduate researchers: ‘We’re going to have an impact on the future’

Serena Lee aspires to increase our understanding of people living with “invisible disabilities.” Amy Stuyvesant wants to figure out how changes in hurricane activity are helping or hindering the forests of Puerto Rico.

Although their subjects of their research are unrelated, these two graduating seniors share a key distinction. Thanks to the Wasserman Undergraduate Scholars Program, they are pursuing high-level research that they expect to have an impact far beyond UCLA.

One of several programs that fuel undergraduate research at UCLA, the Wasserman Foundation Scholarships have provided nearly $2.5 million for 528 student projects since 1999. Created by generous support from Lew Wasserman, the longtime chairman of MCA, and his wife, Edie, the awards allow students to devote time and energy to senior thesis projects or to participate in faculty research. Awards are typically about $5,000 per year and are given to students completing a senior thesis or an equivalent project in their field.

Among their many contributions to UCLA, the Wassermans donated $8.75 million to establish an endowment to fund scholarships for undergraduate students. (Lew Wasserman passed away in 2002; Edie in 2011.) The endowment was inspired by letters they had received over the years from UCLA students who said they could not have attended college without financial assistance from the couple’s earlier donations.

For her senior thesis, Lee, a communications major, is studying people living with so-called invisible disabilities — health issues that are not immediately apparent to others, such as vision and hearing impairments; chronic conditions such as fibromyalgia, arthritis and diabetes; and mental illnesses. 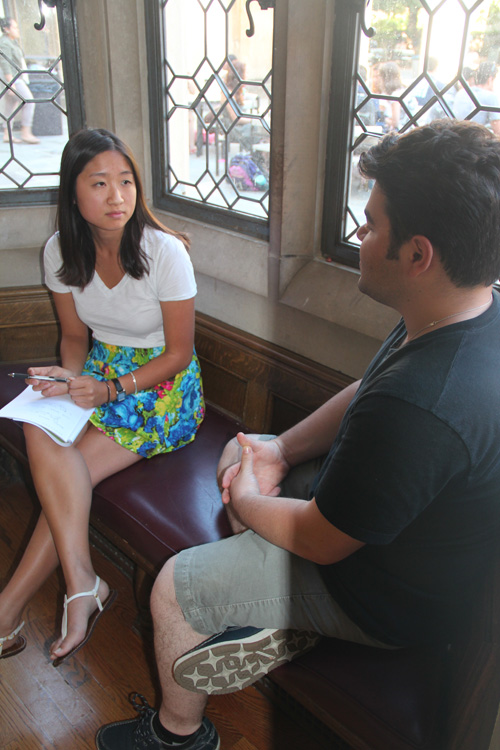 Serena Lee interviews third-year student Benjamin Gelbart about his invisible disability, a brain injury suffered as a result of a schoolyard assault. Gelbart is one of nearly a dozen people Lee is interviewing as part of her Wasserman Scholarship-supported research project. Image credit: University of California

Her research was inspired by the aftermath of a car accident during her sophomore year that left Lee with a concussion and, later, post-concussion syndrome. Although she withdrew from school for a year to focus on her health, Lee has suffered bouts of depression and the injury still affects her: At times, she has difficulty being among large crowds and she no longer is able to learn the way she did before the accident.

“Before the accident I could read a book once and easily retain the information, and I didn’t have to spend as much time studying as I do now,” she said. “I have changed the way I memorize things, and I have to take short breaks while studying and take exams in a different room. So there have been a lot of adjustments.”

Lee confided in Paul von Blum, a senior lecturer in African-American studies and communication studies, who encouraged her to use her experience as a springboard for scholarly pursuits and guided her to the Wasserman program.

“Through my research I’m trying to change the way disability is viewed,” said Lee, who has interviewed a dozen people with hidden disabilities in Los Angeles and, via Skype, in locations like Australia and England. She said she wants to raise public awareness about the scope of invisible disabilities and help people better understand that they are just as significant as other disabilities.

At a recent on-campus reception, Lee had the opportunity to learn more about the Wasserman Foundation and meet Lew and Edie’s grandson Casey, a UCLA alumnus who now serves as the foundation’s president and chief executive officer. She also met other Wasserman Scholars whose research topics include cancer, soil pollution and climate change.

Among her Wasserman Scholar peers is Amy Stuyvesant, a fourth-year environmental studies major who is researching the effects of increased hurricane activity in the forests of Puerto Rico.

Rising sea surface temperatures near Puerto Rico have led to more intense hurricanes, which have blown unusually large amounts of leaves to the forest floor. This, in turn, has altered the levels of nutrients making their way into the soil, which Stuyvesant found may have implications for certain organisms living in the forest.

“Normally when the leaves hit the ground, the nutrients have already been taken out of them,” Stuyvesant said. “Now we’re finding that the nutrients are remaining in the leaves, and once they’re shaken off the trees by wind and rain, these nutrients are being incorporated into the soil, and they’re changing microbial communities and possibly plant growth. The whole process is being affected by this influx of green vegetation.” Continued studies will be needed in order to determine whether the impact is positive or negative, she said. 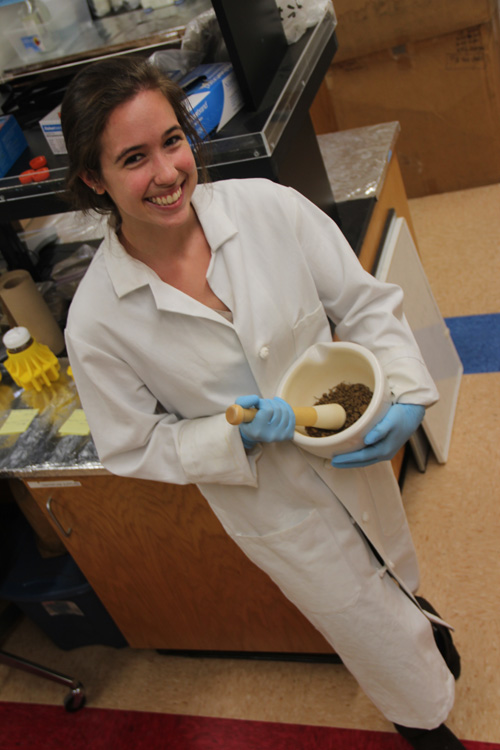 Amy Stuyvesant works with soil samples to learn how hurricane activity is impacting the forests of Puerto Rico. Image credit: University of California

Her data collection complete, Stuyvesant is writing her paper and plans to submit it for publication in an academic journal. Her Wasserman experience has encouraged her to think seriously about a career in academia. “It has made me more interested in pursuing a Ph.D., maybe becoming a professor or maybe just continuing to be involved with research,” she said.

Invisible disabilities and Puerto Rican forests are just two of the myriad topics in which students are making their marks. And programs like the Wasserman scholarship have made undergraduate research a much more attainable pursuit, said Patricia Turner, dean and vice provost for undergraduate education.

Investing in the future

Turner said the benefits of undergraduate research are many: It makes students stronger candidates for internships, employment and graduate programs; provides networking opportunities with people in specialized fields; allows students to help create new knowledge; and may even enhance the rest of their academic experience.

“Often when they have a research experience, and get to see what they’re doing three-dimensionally, their classroom performance improves,” she said.

The generosity of donors like the Wasserman family has become even more important recently given plummeting state funding for higher education.

Perhaps more importantly, undergraduate scholarships have become critical “investments in the future,” Turner said. Donors increasingly understand that they will realize a return on their investments because of how students’ discoveries will improve lives around the world for years to come.

That’s a notion echoed by Serena Lee. “I’m so lucky to be part of this group of scholars,” she said. “We might not know how, yet, but we’re going to have an impact on the future.”