New UCLA research could help explain the link between a high-cholesterol diet and an elevated risk for colon cancer. 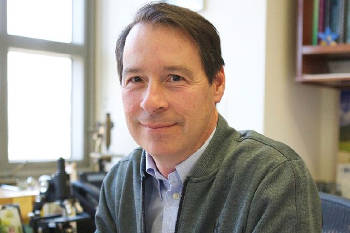 The connection between dietary cholesterol and colon cancer had been known, but research led by Dr. Peter Tontonoz is the first to explain the mechanism behind it. Image credit: UCLA Health

“We were excited to find that cholesterol influences the growth of stem cells in the intestines, which in turn accelerates the rate of tumor formation by more than 100-fold,” said Dr. Peter Tontonoz, the medical school’s Frances and Albert Piansky Professor of Pathology and Laboratory Medicine. “While the connection between dietary cholesterol and colon cancer is well established, no one has previously explained the mechanism behind it.”

The scientists increased cholesterol in the intestinal stem cells in some of the mice by introducing more of the substance into their diets. In others, the researchers altered a gene that regulates phospholipids, the primary type of fat in cell membranes, which spurred the cells to produce more cholesterol on their own.

The stem cells’ ability to multiply increased in both groups.

As the animals’ cholesterol levels rose, their cells divided more rapidly, causing the tissue lining their guts to expand and their intestines to lengthen. These changes significantly sped up the rate of tumor formation in their colons.

The UCLA team will explore whether the phospholipid-cholesterol interaction they discovered plays a similar role in accelerating the growth of other cancers.

The three-year study was funded by the National Heart, Lung and Blood Institute and the National Institute of Diabetes and Digestive and Kidney Diseases.