In February of this year, a team of scientists reported the surprising discovery of a previously unknown third radiation ring — a narrow one that briefly appeared between the inner and outer rings in September 2012 and persisted for a month.

In new research, space scientists from the UCLA College of Letters and Science have successfully modeled and explained the unprecedented behavior of this third ring, showing that the extremely energetic particles that made up this ring, known as ultra-relativistic electrons, are driven by very different physics than typically observed Van Allen radiation belt particles. The region the belts occupy — ranging from about 1,000 to 50,000 kilometers above the Earth’s surface — is filled with electrons so energetic they move close to the speed of light.

“In the past, scientists thought that all the electrons in the radiation belts around the Earth obeyed the same physics,” said Yuri Shprits, a research geophysicist with the UCLA Department of Earth and Space Sciences. “We are finding now that radiation belts consist of different populations that are driven by very different physical processes.”

Shprits, who is also an associate professor at Russia’s Skolkovo Institute of Science and Technology, a new university co-organized by MIT, led the study, which is published Sept. 22 in the journal Nature Physics. 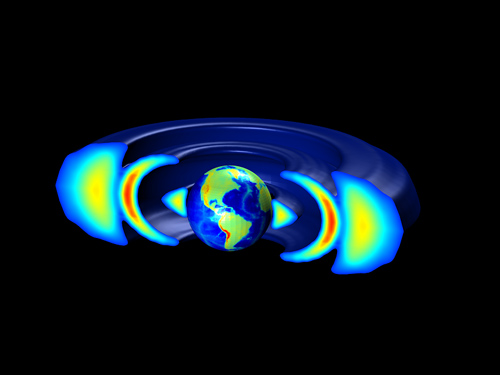 Ring formation between belts. Model showing third radiation ring (red). Recent observations by NASA’s Van Allen Probes mission showed an event in which three radiation zones were observed at extremely high energies, including an unusual medium narrow ring (red) that existed for approximately four weeks. The modeling results, displayed in this illustration, revealed that for particles at these high energies, different physical processes are responsible for the acceleration and loss of electrons in the radiation belts, which explains the formation of the unusual long-lived ring between the belts. The discovery will help protect satellites form the harmful radiation in space, UCLA scientists report. (Image credit: Yuri Shprits, Adam Kellerman, Dmitri Subbotin/UCLA)

The Van Allen belts can pose a severe danger to satellites and spacecraft, with hazards ranging from minor anomalies to the complete failure of critical satellites. A better understanding of the radiation in space is instrumental to protecting people and equipment, Shprits said.

Ultra-relativistic electrons — which made up the third ring and are present in both the outer and inner belts — are especially hazardous and can penetrate through the shielding of the most protected and most valuable satellites in space, noted Shprits and Adam Kellerman, a staff research associate in Shprits’ group. 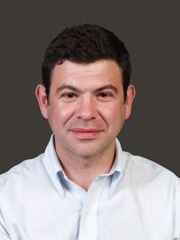 Yuri Shprits, research geophysicist with the UCLA Department of Earth and Space Sciences and an associate professor at Russia’s Skolkovo Institute of Science and Technology. Image credit: University of California

“Their velocity is very close to the speed of light, and the energy of their motion is several times larger than the energy contained in their mass when they are at rest,” Kellerman said. “The distinction between the behavior of the ultra-relativistic electrons and those at lower energies was key to this study.”

After the storm, a cold bubble of plasma around the Earth expanded to protect the particles in the narrow ring from ion waves, allowing the ring to persist. Shprits’ group also found that very low-frequency electromagnetic pulsations that were thought to be dominant in accelerating and losing radiation belt electrons did not influence the ultra-relativistic electrons.

The Van Allen radiation belts “can no longer be considered as one consistent mass of electrons. They behave according to their energies and react in various ways to the disturbances in space,” said Shprits, who was honored by President Obama last July with a Presidential Early Career Award for Scientists and Engineers.

“Ultra-relativistic particles move very fast and cannot be at the right frequency with waves when they are close to the equatorial plane,” said Ksenia Orlova, a UCLA postdoctoral scholar in Shprits’ group who is funded by NASA’s Jack Eddy Fellowship. “This is the main reason the acceleration and scattering into the atmosphere of ultra-relativistic electrons by these waves is less efficient.”

“This study shows that completely different populations of particles exist in space that change on different timescales, are driven by different physics and show very different spatial structures,” Shprits said.

The team performed simulations with a model of the Earth’s radiation belts for the period from late August 2012 to early October 2012. The simulation, conducted using the physics of ultra-relativistic electrons and space weather conditions monitored by ground stations, matched the observations from NASA’s Van Allen Probes mission extraordinarily well, confirming the team’s theory about the new ring.

“We have a remarkable agreement between our model and observations, both encompassing a wide range of energies,” said Dmitriy Subbotin, a former graduate student of Shprits and current UCLA staff research associate.

“I believe that, with this study, we have uncovered the tip of the iceberg,” Shprits said. “We still need to fully understand how these electrons are accelerated, where they originate and how the dynamics of the belts is different for different storms.”

The Earth’s radiation belts were discovered in 1958 by Explorer I, the first U.S. satellite that traveled to space.

The research team also includes UCLA postdoctoral scholar Alexander Drozdov, who works with Van Allen Probes observations; Kyung-Chan Kim a researcher from Korea who recently finished his postdoctoral studies at UCLA; UCLA assistant researcher Drew Turner, who provided data; researcher Maria E. Usanova of Canada’s University of Alberta, who provided critical observations of electromagnetic pulsations from the Canadian Space Agency-funded CARISMA ground network of magnetometers; and Daniel Baker a director of the Laboratory of the Atmospheric and Space Physics at the University of Colorado, who provided expertise on the analysis of data from the Van Allen Probes.

The study was supported by NASA and also by the National Science Foundation and the University of California Office of the President.