Non-physical abuse by a dating partner such as threats, controlling behavior and harassing text messages can have a serious effect on a teenager’s health and well-being, finds new research led by a Michigan State University scholar.

The study, which appears in the research journal BMC Public Health, is one of the first to examine the effects of both physical and non-physical dating abuse that is relevant to today’s highly connected adolescents.

While physical and sexual violence significantly affected the health and behavior of adolescents aged 13-19, non-physical abuse such as stalking through text messages or email also had a considerable effect, said Amy Bonomi, lead researcher on the study and chairperson and professor in MSU’s Department of Human Development and Family Studies.

“Often an argument in society is that abuse that is not physical or sexual really doesn’t matter,” Bonomi said. “Is it really harmful, for example, if I call my partner a bad name? Or if I’m harassing or stalking them with text messages? Well, we’ve shown that it does have a negative effect on health.” 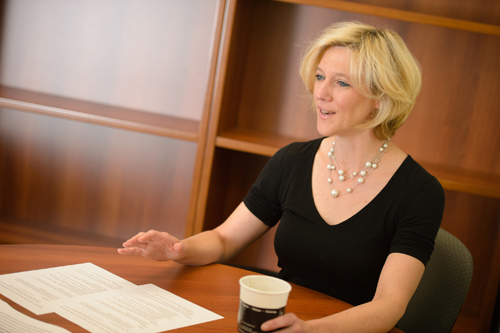 Amy Bonomi, chairperson and professor in Michigan State University’s Department of Human Development and Family Studies, argues that non-physical forms of dating abuse such as harassing text messages can harm the health of teens. Photo by G.L. Kohuth

Bonomi and colleagues surveyed 585 college students about their dating experiences and health histories.

Compared to non-abused females, females who had been physically or sexually abused by a dating partner when they were between the ages of 13 and 19 were nearly four times more likely to smoke. They also were more than four times as likely to develop certain eating disorders and were at increased risk of depression and engaging in risky sexual behavior.

But females who had been victims of non-physical abuse were nearly as likely to take up smoking. They also were at increased risk of depression, eating disorders and engaging in risky sexual behavior.

For males, no health differences were observed for those experiencing physical and sexual dating violence compared to those who did not. Interestingly, however, males who experienced non-physical dating abuse were much more likely to smoke and develop certain eating disorders.

Taken as a whole, Bonomi said the findings point to the need for developing programs to prevent dating violence in all its forms and to intervene when it occurs. These programs, she added, should be targeted to students starting in elementary school.

“One of the things that we need to do better at society is to have conversations very early with young people – both females and males – about healthy relationship strategies,” Bonomi said. “We often wait too long – until middle school and even high school – to begin talking to girls and boys about relationship skills, if we even talk about it at all.”

Bonomi’s co-authors were Melissa Anderson from Group Health Research Institute in Seattle; Julianna Nemeth and Cynthia Buettner from Ohio State University; and Frederick Rivara from the University of Washington.