UCLA life scientists have identified for the first time a particular gene’s link to optimism, self-esteem and “mastery,” the belief that one has control over one’s own life — three critical psychological resources for coping well with stress and depression.

“I have been looking for this gene for a few years, and it is not the gene I expected,” said Shelley E. Taylor, a distinguished professor of psychology at UCLA and senior author of the new research. “I knew there had to be a gene for these psychological resources.”

The research is available in the online edition of the journal Proceedings of the National Academy of Sciences (PNAS) and in the journal’s Sept. 13 print edition. 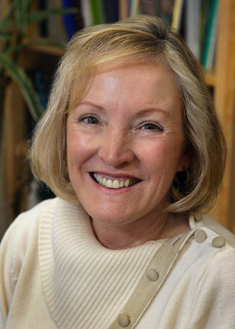 The gene Taylor and her colleagues identified is the oxytocin receptor gene (OXTR). Oxytocin is a hormone that increases in response to stress and is associated with good social skills such as empathy and enjoying the company of others.

At a particular location, the oxytocin receptor gene has two versions: an “A” (adenine) variant and a “G” (guanine) variant. Several studies have suggested that people with at least one “A” variant have an increased sensitivity to stress, poorer social skills and worse mental health outcomes.

The researchers found that people who have either two “A” nucleotides or one “A” and one “G” at this specific location on the oxytocin receptor gene have substantially lower levels of optimism, self-esteem and mastery and significantly higher levels of depressive symptoms than people with two “G” nucleotides.

“Sometimes people are skeptical that genes predict any kind of behavior or psychological state. I think we show conclusively that they do,” said Taylor, who is a member of the National Academy of Sciences and directs UCLA’s Social Neuroscience Laboratory.

She stresses, however, that while genes may predict behavior, they do not determine it.

Genes are not destiny

“Some people think genes are destiny, that if you have a specific gene, then you will have a particular outcome. That is definitely not the case,” Taylor said. “This gene is one factor that influences psychological resources and depression, but there is plenty of room for environmental factors as well. A supportive childhood, good relationships, friends and even other genes also play a role in the development of psychological resources, and these factors also play a very substantial role in whether people become depressed.

“The expression of genes is not always stable,” Saphire-Bernstein noted. “For physical features like eye color, it is stable. Your eye color is not going to change this week, but your depression might change this week. Genes are only one set of contributing factors to behavior, to illness and to psychological disorders such as depression.”

The researchers brought 326 people into a UCLA laboratory and had them complete self-assessments of optimism, self-esteem and mastery. To measure self-esteem, questionnaires included such statements as “I feel I am a person of worth, at least as much as other people” and asked subjects whether they agreed or disagreed, using a four-point scale. To measure optimism, the researchers included statements such as “In uncertain times, I usually expect the best” and “I hardly ever expect things to go my way.”

The researchers obtained DNA from participants’ saliva and used UCLA’s Genotyping Center to analyze the DNA for the variants in the OXTR gene. Participants also completed an assessment of depression, using a tool that is often employed by clinical psychologists to identify people at risk for mental health problems.

Even people with the “A” variant can overcome depression and manage stress, according to Taylor. “We found nothing that interferes with learning coping skills,” she said.

The research implies that people would benefit if they could train themselves to be more optimistic, to have higher self-esteem and a higher sense of mastery to improve their ability to cope with stressful events.

Other co-authors of the study were Baldwin Way, an assistant professor of psychology at Ohio State University who conducted the research as a UCLA postdoctoral scholar in Taylor’s lab, and Heejung Kim and David Sherman, associate professors of psychology at UC Santa Barbara, who are also former members of Taylor’s lab.

An increase in oxytocin tends to lead to more social behavior, especially under stress and especially in females, earlier research has indicated.

OXTR likely interacts with other genes. Taylor and her colleagues plan to continue to search for additional genes that predict behavioral responses to stress and to study how they interact.

“I originally assumed that biology largely determines behavior, and so it was a tantalizing surprise to see how clearly social relationships forge our underlying biology, even at the level of gene expression,” Taylor wrote in her 2002 book “The Tending Instinct: How Nurturing Is Essential to Who We Are and How We Live.” “Chief among these social forces are the ways in which people take care of one another and tend to one another’s needs. An early warm and nurturant relationship, such as mothers often enjoy with their children, is as vital to development as calcium is to bones.

“The benefits that tending provides to children, especially those with genetic risks, are substantial. From life in the womb to the surprisingly resilient brain of old age, the social environment molds and shapes the expression of our genetic heritage until the genetic contribution is sometimes barely evident. A mother’s tending can completely eliminate the potential effects of a gene; a risk for a disease can fail to materialize with nurturing, and a genetic propensity may lead to one outcome for one person and the opposite for another, based on the tending they received.”