While duplication of hereditary information is a relatively rare event in animal evolution, it is common in plants. Potatoes, coffee, bananas, peanuts, tobacco, wheat, oats and strawberries, to name but a few, all carry multiple copies of their genetic material, in a condition called polyploidy.

In contrast, most animals including humans are diploid, meaning an individual carries only two copies of each chromosome, the carriers of genetic information, one from each parent. 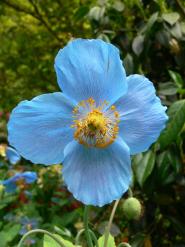 “Scientists have been studying polyploidy for a century. It’s one of the first genomic characters they were able to get a handle on because chromosomes are visible with a microscope,” said Michael Barker, an assistant professor in the University of Arizona’s department of ecology and evolutionary biology, who recently published a paper with several co-authors in Science magazine.

The study settles a long-standing debate in evolutionary biology: In the relentless struggle for survival under the pressure of natural selection, what are the advantages – or disadvantages – of going polyploid by making multiple copies of the entire genome and passing them on to the next generation?

Analyzing more than 2,500 plant genomes with a computer-based, statistical approach, the researchers discovered a trend that sets polyploid plant lineages apart from their diploid relatives.

“We find that plants that became polyploid in their recent evolutionary past are less likely to diversify into new species and face a higher risk of extinction compared to their diploid relatives,” said Itay Mayrose, lead author of the study and now an assistant professor at the department of molecular biology and ecology of plants at Tel Aviv University in Israel. 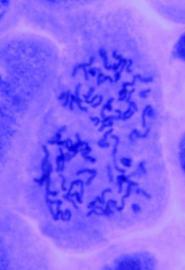 Under a microscope, this cell of a polyploid Isoëtes quillwort, a group of fern-like plants, reveals multiple copies of chromosomes. Image credit: M. Barker

Mayrose and Barker collaborated on this project while they were postdoctoral fellows at the Biodiversity Research Centre of the University of British Columbia in Vancouver, Canada.

“Our study suggests polyploidy is an evolutionary gamble,” Barker said. “Duplicating its genome puts a plant lineage at a higher risk of extinction, but in those few cases where it does provide an evolutionary advantage, other analyses suggest that it could really pay off in the long run with significant increases in diversity.”

In a previous study, Barker and Mayrose found that more than one-third of all existing plant species are polyploid. According to Barker, botanists have gone back and forth about whether having multiple copies of the genome is an evolutionary bane or boon.

Many argued that polyploidy makes it difficult for a plant lineage to diversify into new species because any mutations that might confer a new trait and a selective advantage over competitors would be masked by the remaining, unaffected copies of that particular gene, rendering the potential advantage invisible to natural selection and therefore useless.

“Many scientists believed that polyploidy is an interesting phenomenon, but probably not very significant in the great scheme of things,” Barker said.

But according to Mayrose, things changed when recent genome analyses discovered that many plants are actually ancient polyploids whose duplicated genomes have diverged over millions of years to such a degree that they appear diploid. 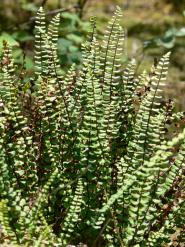 Many fern species carry multiple copies of their genes, such as this Maidenhair fern. Image credit: M. Barker

“It turns out there are no existing seed plants that have never had their genome duplicated,” Barker said. “Every lineage has undergone a genome duplication at least once at some point in its evolutionary history.”

“Driven largely by these observations, researchers have come to view polyploidy as a key innovation that drives evolutionary novelty and diversification,” Mayrose added.

“So we set out to find out how polyploidy affects the evolutionary success of plants,” Barker said. “We find that contrary to the popular opinion, just duplicating its genome doesn’t instantly make a plant lineage successful.”

According to the researchers, it is possible that polyploids suffer lower evolutionary success than related diploids over the short term because duplication events are likely to happen only in single individuals and therefore fail to establish themselves in a population.

In addition, competition with established, related diploid lineages renders polyploids susceptible to extinction. Over the long term, however, the fact that particularly fit polyploid lineages carry more variety in their genes to draw from may help them branch into new species.