UCLA professor Thomas B. Smith will head an international research project investigating the effects of climate change on biodiversity in Central Africa’s rainforests, under a $4.95 million grant from the National Science Foundation.

UCLA will receive $3 million through the NSF’s Partnerships for International Research and Education (PIRE) program, the agency announced this week. Smith, the director of UCLA’s Center for Tropical Research and a professor with joint appointments at the Institute of the Environment and Sustainability and the department of ecology and evolutionary biology, will lead the team of U.S. and international researchers. 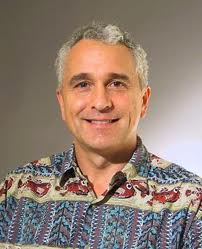 For the PIRE project, the team will work to find ways to promote conservation in Central African rainforests. The scientists will map out the distribution of plants and animals in the rainforest to pinpoint species and subspecies, examine the ways in which climate change could affect biodiversity, and rank geographic areas based on their need for protection.

“This is an exciting opportunity to understand how climate change will affect plants and animals in one of the biologically richest regions on the planet,” Smith said. “Africa is the continent predicted to be most severely affected by climate change, making the results critically important for making wise management decisions. Determining what regions to protect now will determine what species will ultimately survive.”

Central African rainforests represent one of the most important centers of biodiversity in the world, but ongoing habitat degradation and deforestation severely limit the ability of the wildlife to cope with climate change.

The work will take place in Cameroon and Gabon and will focus on a wide range of species, including plants, butterflies, lizards, birds, chimps and other mammals. 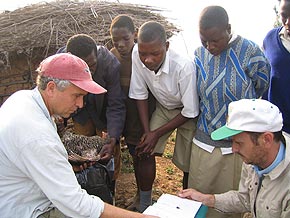 Thomas Smith in the field. Tom Smith (far left) in Uganda doing research on avian blood parasites with Gediminas Valkiunas from the University of Vilnius (right), and residents of the village of Western Uganda near Bwindi Forest National Park. Image credit: University of California

Other UCLA professors joining the five-year project are Walter Allen, from the Graduate School of Education and Information Studies; environmental economist Matthew Kahn, who holds joint appointments in the economics department, the Luskin School of Public Affairs and the Institute of the Environment and Sustainability; and Hilary Godwin, from the Fielding School of Public Health.

In addition to the research, UCLA will also be offering a study-abroad course on conservation this summer in Cameroon and workshops in Gabon.

Researchers will identify peak areas of change and prioritize areas for conservation according to their social and economic value, as well as the threats they face from development and projected climate change.