The enormously diverse complexity seen amongst individual species within the animal kingdom evolved from a surprisingly small gene pool. For example, mice effectively serve as medical research models because humans and mice share 80-percent of the same protein-coding genes. The key to morphological and behavioral complexity, a growing body of scientific evidence suggests, is the regulation of gene expression by a family of DNA-binding proteins called “transcription factors.” Now, a team of researchers with the U.S. Department of Energy’s Lawrence Berkeley National Laboratory (Berkeley Lab) and the University of California (UC) Berkeley has discovered the secret behind how one these critical transcription factors is able to perform – a split personality.

Using a technique called single-particle cryo-electron microscopy, the team, which was led by biophysicist Eva Nogales, showed that the transcription factor known as “TFIID” can co-exist in two distinct structural states. These two states – the canonical and the rearranged – differ only in the translocation of a single substructural element – known as lobe A – by 100 angstroms (an atom of hydrogen is about one angstrom in diameter). This structural shift enables initiation of the transcription process by which the genetic message of DNA is copied to RNA for the eventual production of proteins.

“TFIID by itself fluctuates between the canonical and rearranged states,” Nogales says. “When TFIID becomes bound to another transcription factor, TFIIA, it shifts mostly to the canonical state, but in the presence of both TFIIA and DNA, the TFIID shifts to the rearranged state, which enables recognition and binding to key DNA sequences and marks the start of the transcriptional process.”

Understanding the reorganization of TFIID and its role in transcription provides new insight into the regulation of gene expression, Nogales says, a process critical to the growth, development, health and survival of all organisms. 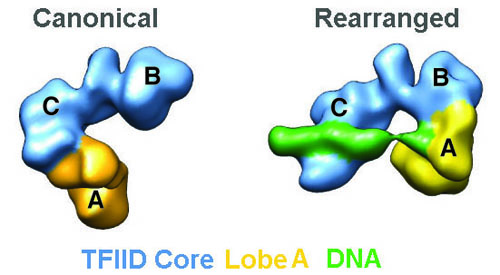 Nogales is a leading authority on electron microscopy and holds joint appointments with Berkeley Lab, the University of California (UC) at Berkeley, and the Howard Hughes Medical Institute (HHMI). She is the corresponding author of a paper describing this research in the journal Cell, titled “Human TFIID Binds to Core Promoter DNA in a Reorganized Structural State.” Co-authors are Michael Cianfrocco, George Kassavetis, Patricia Grob, Jie Fang, Tamar Juven-Gershon and James Kadonaga.

The growing number of organisms whose genomes have been sequenced and made available for comparative analyses shows that the total number of genes in an organism’s genome is no measure of its complexity. The fruit fly, Drosophila, for example, is far more complex than the nematode worm, Caenorhabditis elegans, but has about 6,000 fewer genes than the worm’s 20,000. The total number of human genes is estimated to fall somewhere between 30,000 and 40,000. By comparison, the expression of the genes of both the fruit fly and the nematode are regulated through about 1,000 transcription factors, whereas the human genome boasts approximately 3,000 transcription factors. That multiple transcription factors often act in various combinations with one another creates even more evolutionary roads to organism complexity.

“Although the number of protein coding genes has remained fairly constant throughout metazoan evolution, the number of regulatory DNA elements has increased dramatically,” Nogales says. “Our discovery of the existence of two structurally and functionally distinct forms of TFIID suggests a potential molecular mechanism by which a combination of transcription factors can tune the expression level of genes and thereby give rise to a diversity of outcomes.”

Despite its critical role in transcription, high-resolution structural information of TFIID has been restricted to crystal structures of a handful of protein subunits and domains. Nogales and her colleagues are the first group to obtain three-dimensional visualization of human TFIID that is bound to DNA. The single-particle cryo-electron microscopy technique they employed records a series of two-dimensional images of an individual molecules or macromolecular complexes frozen in random orientations, then computationally combines these images into high-resolution 3D reconstructions.

“Through cryo-EM and extensive image-sorting, we found that TFIID exhibits a surprising degree of flexibility, moving its lobe A, a region that covers approximately one-third of the complex, by 100 angstroms across its central channel,” says Cianfrocco, lead author of the Cell paper. “This movement of the lobe A is absolutely essential for TFIID to bind to DNA.” 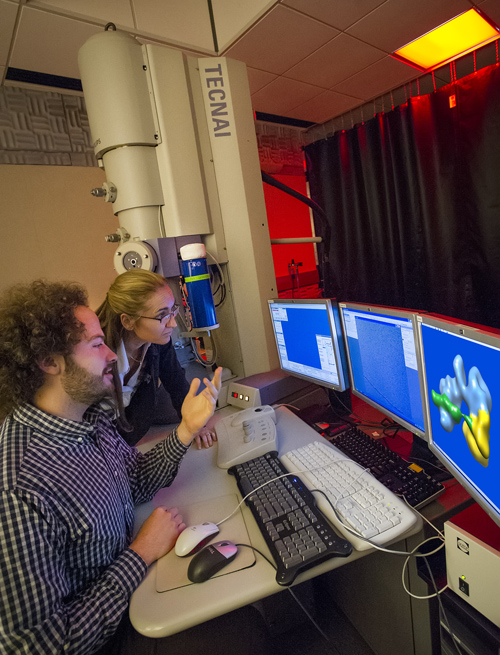 Michael Cianfrocco and Eva Nogales used single-particle cryo-electron microscopy to learn how the TFIID transcription factor helps regulate of gene expression, a process critical to the growth, development, health and survival of all organisms. (Photo by Roy Kaltschmidt)

“The TFIIA molecule serves as the mediator for this transition, maintaining TFIID in the canonical state in the absence of DNA and initiating the formation of the rearranged state in the presence of promoter DNA,” Cianfrocco says. “Without the presence of TFIIA, the binding of TFIID to DNA is very weak.”

Nogales and her colleagues are now studying how TFIID, once it is bound to DNA, recruits the rest of the machinery required to transcribe the genetic message into RNA.

“Our new work will involve constructing a macromolecular complex that is well over two million Daltons in size, which is about the size of a bacterial ribosome,” Nogales says. “The size and relative instability of our complex will represent a major experimental challenge.”

This work was supported by grants from the National Institutes of Health and the Human Frontier in Science Program in Strasbourg, Germany, and the Howard Hughes Medical Institute.