AUSTIN, Texas — Researchers at The University of Texas at Austin and the Stanford University School of Medicine have found a novel way to engineer key cells of the immune system so they remain resistant to infection from HIV, the virus that causes AIDS.

The study, which was published this week in Molecular Therapy, describes the use of a kind of molecular scissors to cut and paste a series of HIV-resistant genes into T cells, specialized immune cells targeted by the virus.

The new approach could ultimately replace drug treatment, in which patients have to take multiple medications daily to keep the virus in check.

“Providing an infected person with resistant T cells would not eradicate their viral infection,” said Sara Sawyer, assistant professor of molecular genetics and microbiology at The University of Texas at Austin and a co-author of the study. “However, it would provide them with a protected set of T cells that would ward off the immune collapse that typically gives rise to AIDS. It would be an alternative way to manage the disease.”

One of the big challenges in treating HIV infection is that the virus is notorious for mutating, so patients must be treated with a cocktail of drugs — known as highly active antiretroviral therapy, or HAART — that hit it at various stages of the replication process. The researchers were able to stay ahead of the virus’s mutations by deploying a HAART-like strategy that relies on genetic manipulation.

“Informally we actually call our method ‘genetic HAART,’ ” said Sawyer. “Instead of the cocktail of multiple drugs, we provide these cells with multiple antiviral genes.” 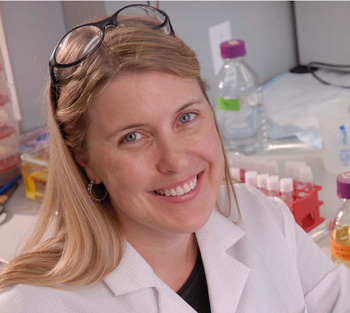 Biologist Sara Sawyer and her colleagues have found a novel way to engineer key cells of the immune system so they remain resistant to infection from HIV, the virus that causes AIDS. Image credit: The University of Texas at Austin

The technique hinges on the fact that the HIV virus typically enters T cells by latching onto one of two surface proteins known as CCR5 and CXCR4. The researchers targeted a section of the DNA of one of these proteins, created a break in the sequence and then pasted in three genes known to confer resistance to HIV.

“This technique of placing several useful genes at a particular site is known as ‘stacking,’ ” said Matthew Porteus, associate professor of pediatrics at Stanford and a pediatric hematologist/oncologist at Lucile Packard Children’s Hospital. “We can use this strategy to make cells that are resistant to both major types of HIV.”

To test the T cells’ protective abilities, the scientists created versions in which they inserted one, two and all three of the genes and then exposed the T cells to HIV.

Though the T cells with the single- and double-gene modifications were somewhat protected against an onslaught of HIV, the triplets were by far the most resistant to infection. These triplet cells had more than 1,200-fold protection against HIV carrying the CCR5 receptor and more than 1,700-fold protection against those with the CXCR4 receptor. The T cells that hadn’t been altered succumbed to infection within 25 days.

Porteus said he views the work as an important step forward in developing a gene therapy for HIV.

“I’m very excited about what’s happened already,” he said. “This is a significant improvement in that first-generation application.”

He said the researchers’ next step is to test the strategy in T cells taken from AIDS patients and then move on to animal testing. He said he hopes to begin clinical trials within three to five years.

Porteus said that though the method is labor-intensive, requiring a tailored approach for each patient, it would save patients from a lifelong dependence on antiretroviral drugs, which have adverse side effects. He said he also hopes to adapt these techniques for use against other diseases, such as sickle cell anemia.