Two large collaborations of scientists working at the Large Hadron Collider in Switzerland made worldwide news in July 2012 when they announced independent observations of the elusive Higgs boson particle — a discovery hailed as one of the greatest scientific accomplishments of recent decades.

This so-called “God particle” was first postulated some 50 years ago as a crucial element of the modern theory of the forces of nature — it is, physicists say, what gives everything in the universe mass — and it had been the subject of worldwide searches ever since.

The Higgs boson research has now been honored with the 2013 Nobel Prize in physics, the Nobel committee announced this morning. The award went to physicists Francois Englert of Belgium and Peter Higgs of Britain, who independently predicted the existence of the particle in 1964.

Thousands of researchers have participated in the Large Hadron Collider (LHC) experiments at the CERN laboratory outside Geneva. More than 2,500 scientists and engineers from 38 countries, including several physics professors from the UCLA College of Letters and Science and their research teams, work on the Compact Muon Solenoid (CMS) experiment, one of two large general-purpose particle physics detectors at the LHC site that observed the Higgs boson. 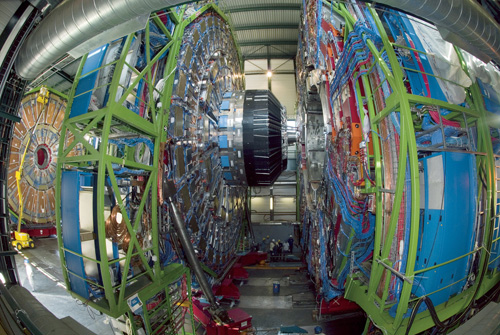 These UCLA professors, researchers, postdoctoral scholars and graduate students have built major portions of the CMS and made significant contributions to the research over a number of years, beginning with UCLA physics professor David Cline, who was one of the founders of the CMS two decades ago and remains an active researcher. Indeed, when Newsweek International published a cover story about the LHC in 2008 titled “The Biggest Experiment Ever,” almost all the equipment in the cover photo came from UCLA.

“It has been immensely gratifying to see the UCLA-built parts of the CMS performing so well,” said Jay Hauser, a UCLA professor of physics and member of the CMS management board. “I’ve spent a good part of my professional career on this experiment, starting in 1995. The UCLA scientists, including researchers Mikhael Ignatenko, Greg Rakness and Viatcheslav Valuev, have done magnificent work in making a very complicated detector work considerably better than even we originally hoped.”

Robert Cousins, a distinguished professor of physics at UCLA, served for three years as deputy to the leader of the CMS. He started working on the experiment in 2000, and since then, his main research activities have been devoted to the CMS. Cousins’ research group is supported by the U.S. Department of Energy. For eight years, he was principal investigator on CMS grants from the National Science Foundation.

“The fundamental questions,” he said, “were asked by the ancient Greeks: Where did we come from? What are we made of? How did the universe evolve and what are the forces of the universe? Nature likely contains undiscovered forces. The history of physics is one of unification of ideas. Any successful attempt to unify the known forces of nature will almost certainly unify some unknown forces of nature at the same time. The job of experimental physicists is to go find those forces.” 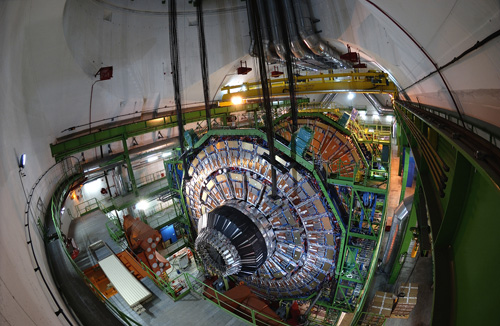 UCLA physics professor David Saltzberg has recently joined the research team and is building new detectors for the next run of the LHC, which will be at an even higher energy. Katsushi Arisaka was instrumental in building the CMS chambers, at UCLA.

The LHC, the largest and highest-energy particle accelerator in the world, is one of the most complex scientific instruments ever built. Ten thousand people from 60 countries helped to design and build the collider and its experiments, including approximately 1,700 scientists, engineers, technicians and students from more than 90 American universities and laboratories supported by the Department of Energy’s Office of Science and the National Science Foundation.

The CMS experiment, which weighs more than 13,000 tons and contains 75 million silicon sensors, has a digital camera–like detector with 65 million pixels that takes 40 million photographs per second.

“My thesis experiment more than 30 years ago had seven channels to detect photons and electrons,” Cousins said. “The experiment I did after my thesis had a couple hundred. CMS has more than 75,000. The technology is incredible.”

CMS and a second experiment at CERN called ATLAS use different techniques to answer the same key questions, and both made observations of the Higgs boson last year. Nearly 2,000 physicists from U.S. institutions participate in these experiments.

“I’m among many people who see this as absolutely the highlight of their career,” Cousins said. “I cannot imagine doing anything else.”

(Watch a November 2012 lecture and a 2010 lecture on the LHC and the Higgs boson by Robert Cousins.)