UCLA physicists discover ‘apparent departure from the laws of thermodynamics’

According to the basic laws of thermodynamics, if you leave a warm apple pie in a winter window eventually the pie would cool down to the same temperature as the surrounding air.

For chemists and physicists, cooling samples of charged particles, also called ions, makes them easier to control and study. So they use a similar approach — called buffer gas cooling — to lower the temperature of ions by trapping them and then immersing them in clouds of cold atoms. Collisions with the atoms cool the originally hot ions by transferring energy from the ions to the atoms — much the same way a warm pie is cooled next to the cold window, said Eric Hudson, associate professor of physics at UCLA.

But new research by Hudson and his team, published in the journal Nature Communications, demonstrates that ions never truly cool to the temperature of the surrounding gas. Also, very surprisingly, they discovered that under certain conditions, two final temperatures exist, and the temperature that the ions choose depends on their starting temperature.

“This apparent departure from the familiar laws of thermodynamics is akin to our warm apple pie either cooling as expected or spontaneously bursting into flames, depending on the pie’s exact temperature when it is placed in the window,” said Hudson, the senior author of the study. 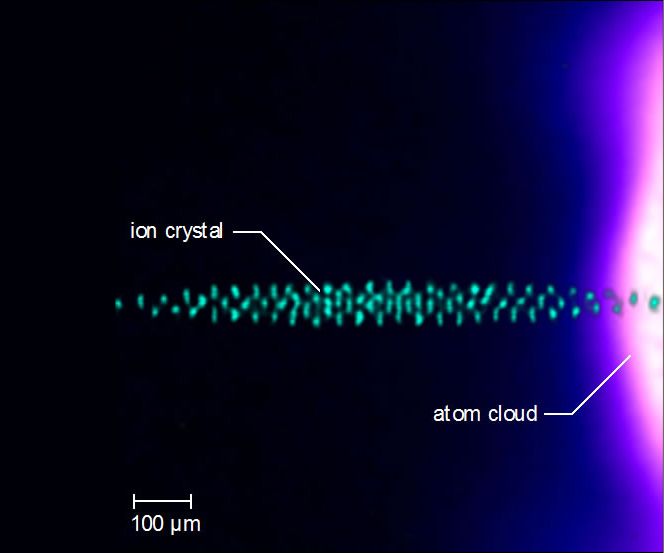 A microscopic sample of barium ions, shown in teal, immersed in a cloud of calcium atoms whose temperature is 1/1,000th of a degree above absolute zero. Image credit: Alex Dunning

The UCLA researchers have, for the first time, placed fundamental limits on the use of buffer gas cooling in “ion traps.” To perform their experiment, the researchers prepared a microscopic sample of laser cooled ions of the chemical element barium and immersed them in clouds of roughly 3 million laser-cooled calcium atoms. The researchers make molecules extremely cold under highly controlled conditions to reveal the quantum mechanical properties that are normally hidden.

The ions were trapped in an apparatus that levitates charged particles by using electric fields that oscillate millions of times per second, confining the ions to a region smaller than the width of a human hair. Both the atomic and ionic samples were brought to ultra-cold temperatures —just one-thousandth of a degree above absolute zero — via a technique in which the momentum of light in a laser is used to slow particle motion.

After allowing collisions between the atoms and ions to occur and the system to reach its final temperature, the physicists removed the calcium atoms and measured the temperature of the barium ions. The results, which show the existence of multiple final temperatures based on ion number and initial temperature, suggest that subtle non-equilibrium physics is at play. 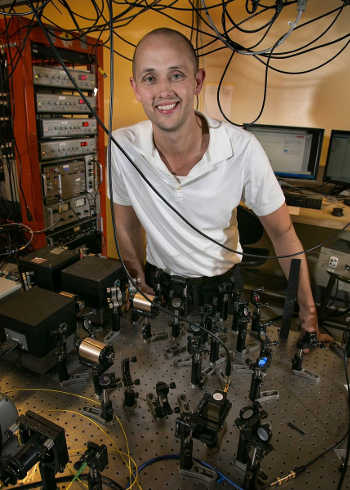 The researchers trace these strange features to the heating and cooling rates which exist in the system — the peculiar temperature dependence of the interaction among multiple ions in an ion trap. Both simulation and theory support their experimental findings, and paint the buffer-gas cooling process as a fundamentally nuanced, non-equilibrium process rather than the straightforward equilibrium process it was originally understood to be.

Lead author Steven Schowalter, a graduate student researcher in Hudson’s laboratory and now a staff scientist at NASA’s Jet Propulsion Laboratory, said, “Our results demonstrate that you can’t just throw any buffer gas into your device — no matter how cold it is — and expect it to work as an effective coolant.”

Buffer gas cooling is crucial in fields ranging from forensics to the production of antimatter. Hudson’s research group has discovered important nuances that revise the current understanding of the cooling process, explain the difficulties encountered in previous cooling experiments and show a new path forward for creating ultra-cold ion samples. With this framework the researchers showed how troublesome effects can be overcome and even exploited to study the mechanisms at play in molecular motors and single-atom heat engines in a precisely controlled manner.

“Of course, this work does not violate the laws of thermodynamics, but it does demonstrate there are still some interesting, potentially useful things to learn about buffer gas cooling,” said John Gillaspy, a physics division program director at the National Science Foundation, which funds the research. “This is the sort of fundamental research that can really guide a wide range of more applied research efforts, helping other scientists and engineers to avoid going down dead-end paths and illuminating more fruitful directions they might take instead.”